“We’re creating markets for produce that might otherwise go to waste.” 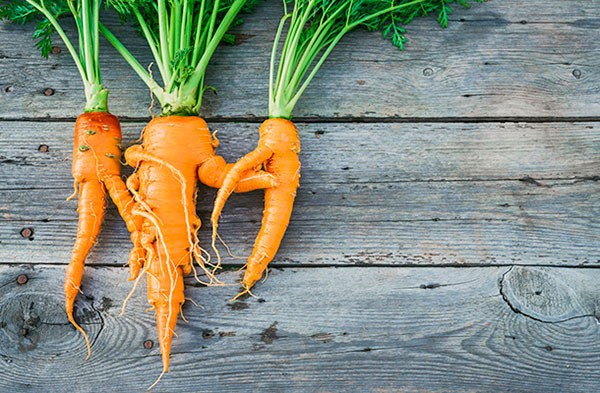 For more info, visit 412foodrescue.org
For a reduced price, you can now get a weekly box of spotted and misshapen produce. That’s because 412FoodRescue is spearheading a community-supported-agriculture program offering the fruits and veggies that are rejected by farmers and consumers because of appearance.

“We all see the typical picture of the perfect tomato, apple, the cartoon-perfect carrots,” says Leah Lizarondo, co-founder and CEO of 412FoodRescue, an organization that collects and distributes unsellable food.

The “Ugly CSA,” as it’s being dubbed by the group, will include “these vegetables that don’t conform to the norm, whether too small or too large. [Or] it has surface scarring, or maybe one part of it was nicked.”

Currently, 412FoodRescue is conducting a small pilot of the CSA in the eastern neighborhoods of Pittsburgh, and there’s a waiting list for when it expands. The produce comes from Penn’s Corner Alliance, a consortium of 30 local farms, which also offers a seasonal CSA. The Ugly CSA will last for eight weeks at $15 per week, which is about “40 percent less than a typical share,” Lizarondo says.

According to ReFED — a nonprofit, private and governmental collaboration on reducing food waste — farmers waste about 16 percent, or 10 million tons, of their produce, costing them $15 billion annually. (Food wasted downstream at restaurants and in people’s homes is far worse — combined it’s more than 80 percent.)

“We’re creating markets for produce that might otherwise go to waste,” Lizarondo says.