31 Days of the Undead: The Dead Don't Die

In honor of Romero Lives!, the city's month-long George A. Romero tribute, Pittsburgh City Paper presents 31 Days of the Undead, a series of reviews and essays about zombie media. Look for new posts going up every day from now through Oct. 31. CP THROWBACK REVIEW
The Dead Don't Die (June 2019) 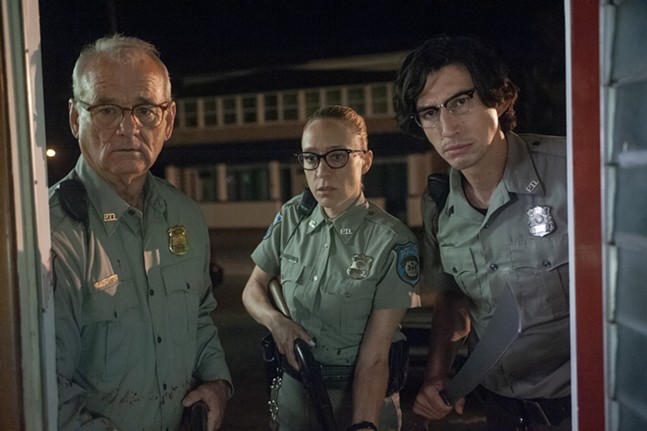 Forget brains, the zombies in Jim Jarmusch's post-apocalyptic comedy The Dead Don't Die crave the things they were most addicted to when they were alive. Fans hoping for gore, don't fret — they still rip apart the living and eat their guts; it's just that after they're finished, they start hunting to feed on their primary addictions.

In addition to the caffeine-addicted character played by the Godfather of Punk, there's a deceased drunk chanting "chardonnay," a music-loving ghoul dragging a guitar down the street, dead kids wishing for candy, and a bunch of long-gone addicts lined up outside the drugstore for Xanax. (Jesus Christ, we're still going to suffer from anxiety after we're dead?!)

This flick has about as many commentaries on the current tumultuous political and social climate as it does celebrities. There's the obsession with material items leading the zombies to look not unlike a crowd of folks looking at their phones as they head to happy hour. There's Steve Buscemi playing a piece-of-shit character who wears a red "Make America White Again" hat. And the zombies in the film were raised from the dead because the Earth has gone off its axis, apparently caused by "polar fracking," even though some scientist on TV says it's not possible, so who really knows what to believe?


As for the big names, we've got Bill Murray, Adam Driver, and Chloe Sevigny for starts. Then there's the always eclectic Tilda Swinton playing — surprise! — someone weird as hell. We also have Danny Glover, Selena Gomez, Carol Kane, and Rosie Perez. (It's not even worth listing the entire cast or the characters' names. The fact that it's full of celebrities feels like another commentary on the viewers' obsession with fame.)

But the main draw that pulled me in to the movie was the brilliant musician and actor Tom Waits. As soon as I saw him looming large on the movie posters, I fantasized about him playing a gravely-voiced ghoul or a bad-ass zombie-fighting machine. But, had I been cast in this film, my blood-soaked zombie self would have been heading to the woods, chanting, "Tom Waits. Tom Waits. Tom Waitttssss." Because that's the only place the actor stayed for the entirety of the film, cast as Hermit Bob, watching the scenes unfold from behind a pair of binoculars and a forest of trees and sadly, not as a participant.

"This is not going to end well," Driver's character predicts repeatedly throughout the film. And he's right. The film seems to be either trying too hard to be offbeat, like Jarmusch watched a "How to create a cult classic" beginner's video on YouTube — or perhaps, not trying hard enough. But there are enjoyable enough moments: some laughs, a great theme song, and with that many celebrities, there's surely at least one to hold every viewer's attention. We're a celebrity-obsessed culture with addictions we can't stay away from. Or so I'm told. Just don't forget the popcornnnnnn.
The Dead Don't Die is available for streaming on Amazon Prime and YouTube.