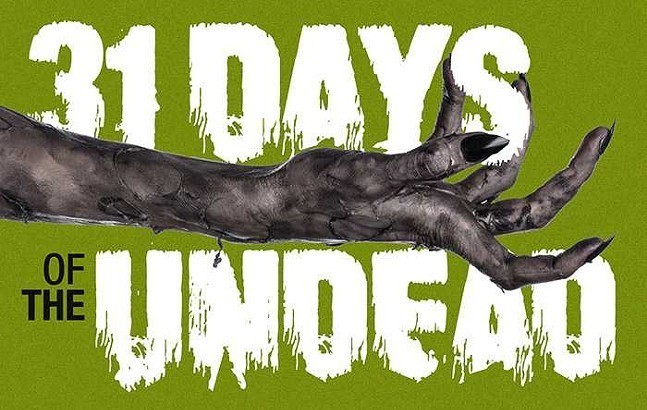 Photo: Focus Features
[There are spoilers in this review. The movie is 15 years old.]

Shaun of the Dead is not the first film to draw parallels between the drudgery of adult working-life and zombiism, but it's a good one.

Shaun (Simon Pegg) works at an electronics store and dates Liz (Kate Ashfield), who's at the end of her rope with his inability to shape up and start treating their relationship like an adult. She still hasn't met his mum (Penelope Winton); he spends his non-work/non-romantic life getting stoned and playing video games with roommate Ed (Nick Frost), apparently the only man in London less acclimated to adulthood than Shaun. Their other roommate, Pete (Peter Serafinowicz), has a job and car; Liz's friends David and Dianne (Dylan Moran and Lucy Davis) prefer the opera to chugging cigarettes and downing pints at the local pub. Liz gets fed up after Shaun forgets their anniversary and calls things off. If a breakup can't get him to grow up, maybe a breakout of zombies can.

The pre-zombie outbreak scenes mirror the post- ones with absurd detail; commuters yawning on public transport can look a lot like the undead. It can be a little taxing if you're thinking too hard, but the symmetry of the script before and after shit hits the fan is a blast to watch. Lines repeated in different contexts like "You've got red on you," "I'm sorry, Shaun," "Kill the Queen," and the unexpected joy of the word "exacerbate" are far more entertaining than they should be, mainly because the people delivering them are so in tune with one another (much of the crew worked together previously on the TV show Spaced).

As someone who's watched Shaun more than I care to admit, I do want to share a few insights that might not be obvious right off the bat: Shaun's employee at the electronics store is played by Rafe Spall, who looks a bit different now in his roles in Jurassic World, Black Mirror: White Christmas, Wright/Frost/Pegg's followup Hot Fuzz, and The Ritual. His character is also the customer on the phone with Ed to buy weed twice in the film. Also, Ed foreshadows the whole film with his "plan" for the next day early on in the film: having a Bloody Mary (the first zombie to arrive is named Mary), having a bite at King's Head (Shaun's stepdad is bitten), a couple at the Little Princess (referring to Liz, Diane, and David), stagger back to the bar (they impersonate zombies on the way back to the Winchester), and "bang! Back to the bar for more shots" (they use a shotgun at the bar).

And just so I don't sound like a know-it-all, Ed says, "We're coming to get you, Babara!" in reference to Shaun's mum and I did not know that was a Night of the Living Dead reference until more than a decade after the movie came out.

Shaun was released in 2004, before Pegg, Frost, and director Edgar Wright were household-ish names, before the widespread resurgence of zombie films in the mainstream, and certainly before other man-child characters started taking leading roles in high-profile comedies. It's not exactly an earth-shattering forebear in the world of cinema, but it's still impressive, very funny, and a blast to watch.

Speaking of 31 Days Of The Undead , Shaun Of The Dead