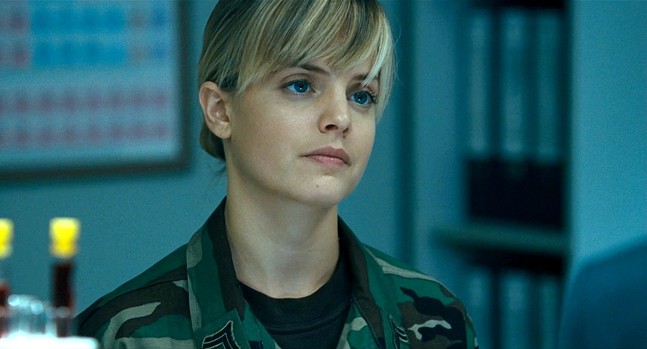 Photo: Millennium Films
Sarah Bowman (Mena Suvari)
What comes to mind when you hear "Day of the Dead"? The Mexican holiday? The third film in Geroge A. Romero's Night of the Living Dead series? What probably doesn't come to mind is the 2008 version of Day of the Dead, starring Mena Suvari (American Beauty, American Pie) and Nick Cannon (Drumline, Mariah Carey's ex). Which, for some reason, out of all the zombie movies out there, I chose to watch.

Corporal Sarah Bowman (Suvari) returns to her small hometown in Colorado after the army puts the area under quarantine due to a cold-like outbreak, Spoiler alert: it's a zombie virus. Symptoms include fever, harsh cough, and finally a nose bleed that leads to "death." Since Sarah happens to be close to home, she leaves her post with Private Bud Crain (Stark Sands) to go check on her mother, who turns out to be sick. The pair rushes Sarah's mother to the hospital, which is overflowing with locals plagued with this "mysterious" illness. While waiting, everyone suffering from the virus takes a turn for the worse and becomes zombies.

Day of the Dead (2008) is supposedly a reimagining of the 1985 version directed by Steve Miner (Friday the 13th parts two and three) and written by Jeffrey Reddick (the Final Destination series). So one would think there would be a lot of potential in the film. Instead, the plot is all over the place. The special effects are pulsing, nausea-inducing, amateurish, and laughable, and they tried too hard to make the zombies different from those who came before.

The zombies in Day of the Dead have skin that looks like green, infected circle skin lacerations, run extremely fast, can jump long distances, and worst of all, are intelligent. They hide themselves, hide bodies, play dead, shoot guns, and sneak through air ducts — a movie pet-peeve of my boyfriend, who hangs air ducts for a living and says they won't fit, let alone hold, a human body.

Atypical zombies happen to be my pet peeve because if they can have human-like qualities, I don't think that makes them a zombie anymore. They are supposed to be dead, not super-human. Halfway through, Bud is turned into a zombie but retains a part of himself, something they realize happens with these undead creatures. Bud retains the part that is obsessed with Sarah — he's caught staring at her butt by Salazar (Cannon) — and fights against the other zombies to help Sarah and her crew. This ultimately leads to his demise, when he stands up against the OG zombie, a scientist who accidentally created the virus and is the smartest of them all.

But the scientist part is the only real tie to the original Day of the Dead. Like infected zombie areas put under quarantine, I would lock this film away in a box and leave it there for good.