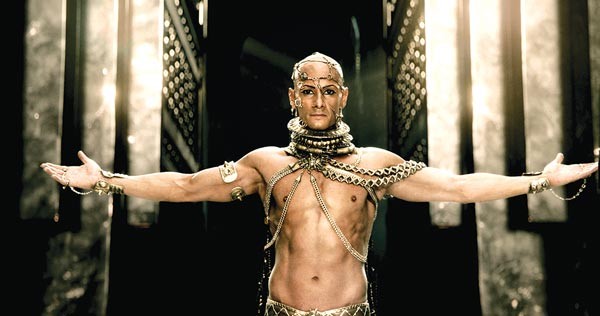 I gave up trying to sort out the plot of this hyped-up swords-and-sandals actioner from Noam Murro, which covers events that happened before, during and after whatever happened in 2006's 300. (This movie is like those bogus music and video re-releases that get you to pay more for a bunch of outtakes.) It doesn't matter: It's just a bunch of muscle men in Spartan bathing suits from ancient Greece fighting a bigger crew of Persian sailors. With swords. In slow-motion. The endless garroting and subsequent blood spurting quickly grows tiresome. There's a huge naval battle in giant rowboats that looks like a very expensive version of a kid splashing toy boats in the bath. While they don't make a lick of sense historically or practically, the scary-drag-queen-extravaganza costumes the Persian bad guy and bad girl wear are faaaabulous. Nothing says "I come to squelch burgeoning democracy" like a mesh gold codpiece or a bustier with spikes down the spine.