Photo: Courtesy of Proyectos Ultravioleta and the artist
“Corazón del espantapájaros (Heart of the scarecrow)” by Naufus Ramírez-Figueroa, part of the 58th Carnegie International at CMOA

Pack up those pool noodles and start shopping for new school supplies because summer has begun winding down. But before you mourn the loss of fun in the sun, consider all the autumnal delights Pittsburgh certainly has in store. Pittsburgh City Paper compiled a list of 25 big events you won’t want to miss in the months to come.

Fri., Sept. 16
This is the last time, he swears. Sir Elton John, the Rocket Man, the Pinball Wizard, the legend himself, stops in Pittsburgh during his “final” tour. If you missed the last final tour, you won’t want to skip Farewell Yellow Brick Road at PNC Park, where you can experience many of the iconic musician’s decade-spanning hits live. 8 p.m. 115 Federal St., North Side. $149-250. All ages. promowestlive.com

Sat., Oct. 15
National and local musicians will convene at Stage AE when Gibson Gives presents Women Who Rock. See Jordin Sparks, the American Idol winner who has gone on to produce multiple Billboard hits, including “Tattoo” and “No Air.” Sparks will be joined by Texas-based blues rocker Emily Wolfe and two Pittsburgh acts, the band Tiny Wars and DJ HUNY. The concert will benefit the Magee-Womens Research Institute. 6:30 p.m. 400 North Shore Drive, North Side. $45. All ages. promowestlive.com

Fri., Oct. 21
Put on your cowboy boots and your painted-on jeans when Spirit presents The Dolly Disco. Dance to a night of hits by the queen of country music, Dolly Parton, as well as music by some of her contemporaries and predecessors, including Tina Turner, ABBA, Kasey Musgraves, Miley Cyrus, Orville Peck, and many more. 9 p.m. Doors at 8 p.m. 242 51st St., Lawrenceville. $18.98. 21 and over. spiritpgh.com

For film and TV fans

Sat., Oct. 8
Put out the gabagool and brew a pot of coffee when cast members from one of the most influential shows in television history come to the Carnegie of Homestead Music Hall. Actors Steve Schirripa, Vincent Pastore, and Michael Imperioli will take the stage for In Conversation With The Sopranos, an evening all about the hit HBO series that tackled mob life, therapy, and family drama. Unlike the show, this event is for all ages. 8 p.m. Doors at 7 p.m. 510 E. 10th Ave., Munhall. $34.75-79.75. All ages. librarymusichall.com

Thu., Oct. 27-Sun., Oct. 30
Welcome … to the Jurassic World Live Tour at PPG Paints Arena. Based on the sequel to Steven Spielberg’s 1993 hit film, the stage show by Feld Entertainment boasts an interactive, immersive experience full of special effects, stunts, music, and, of course, dinosaurs. Be amazed by animatronic and performer-operated dinosaurs during this dramatic trip back to Isla Nubar. 7 p.m. Continues through Sun., Oct. 30. 1001 Fifth Ave., Uptown. $21-120. jurassicworldlivetour.com 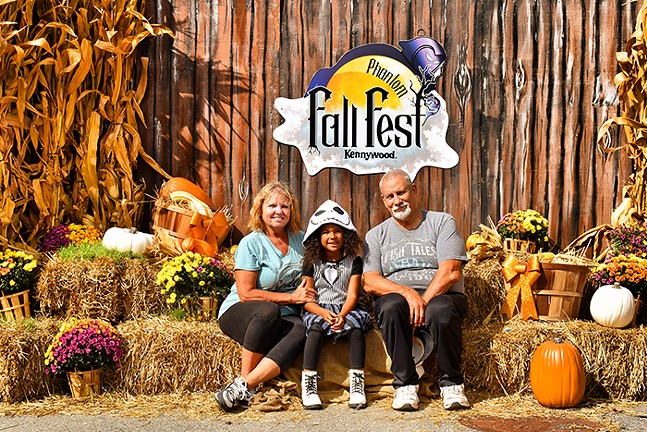 For kids and families

Sat., Sept. 24
Make the most of spooky season with Phantom Fall Fest and HallowBOO! at Kennywood and Idlewild, respectively. Kicking off on the same day, the two events offer tons of seasonal fun for kids and adults. During the day, take the little ghouls to Kennywood or Idlewild for rides, treats, costumed characters, and live shows. At night, Kennywood turns into a terrifying playground for grown-ups. Continues through Oct. 30. 4800 Kennywood Blvd., West Mifflin and 2574 US-30, Ligonier. Included with park admission. kennywood.com and idlewild.com

Sat., Oct. 15-Sun., Oct. 16
Get a load of some larger-than-life gourds when the Pittsburgh Monster Pumpkins Festival rolls into The Stacks at 3 Crossings. Marvel at pumpkins weighing up to one ton, watch artists during the dinosaur-themed pumpkin carving contest and hay bale graffiti art live-painting, witness an epic pumpkin drop, and more. All this fall fun will help benefit WTAE’s Project Bundle-Up, which delivers warm clothes to those in need. 10 a.m.-6 p.m. Continues through Sun., Oct. 16. Railroad Street, between 28th and 29th Street. Free. monsterpumpkins.com

Sat. Oct. 22-Sun., Oct. 30
Take the little monsters trick-or-treating at the Pittsburgh Zoo and PPG Aquarium during ZooBoo. The festive event includes costume parades and contests, crafts, dance parties, magic shows, and more. And be sure to check out all the animals enjoying their own treats throughout the park. 10 a.m.-3 p.m. Continues through Sun., Oct. 30. 7370 Baker St., Highland Park. Included with zoo admission. pittsburghzoo.org/event-zooboo

Sat., Nov. 19
See what’s being touted as the largest exhibition in the country dedicated to the exploration of Mars, and the most comprehensive exhibition gallery built by the Carnegie Science Center since its inception in 1991. Mars: The Next Giant Leap will dedicate a 7,400-square-foot exhibition gallery to highlight Pittsburgh’s role in space exploration, and illustrate local career opportunities in the industry. Developed with input from high school students and other community members, and featuring murals created by Pittsburgh artists, this show will bring the excitement of space travel down to a local level. 1 Allegheny Ave., North Side. Included with museum admission. carnegiesciencecenter.org

Wed., Oct. 5
Before the season of snow and ice sets in, get swept up in the magic of Frozen at the Benedum Center. Presented by PNC Broadway in Pittsburgh, the traveling production based on Disney’s hit animated film will delight audiences during an exclusive two-week premiere engagement in Pittsburgh. Experience live versions of songs like “Let It Go” and “Do You Want to Build a Snowman?” and become immersed in amazing costumes, set design, and other creative elements that make this one show you won’t want to miss. 7:30 p.m. Continues through Sun., Oct. 16. 237 Seventh St., Downtown. $32-132. All ages. trustarts.org
click to enlarge

Wed., Oct. 19
The Nutcracker, but make it jazz. That’s the concept behind Sugar Hill, a reimagining of the timeless holiday ballet about a young girl transported to a world ruled by a handsome Nutcracker prince. See the world premiere of this musical featuring a 1960 arrangement of Tchaikovsky’s score by bandleaders Duke Ellington and Billy Strayhorn. The Benedum Center show promises to celebrate the “music and magic of the jazz heartbeat of Harlem in Sugar Hill” and serve as a “tribute to the joy of collaboration, the beauty of diversity, and the power of individuality.” 7:30 p.m. Continues through Sun., Oct. 30. 237 Seventh St., Downtown. $51.25-101.25. trustarts.org 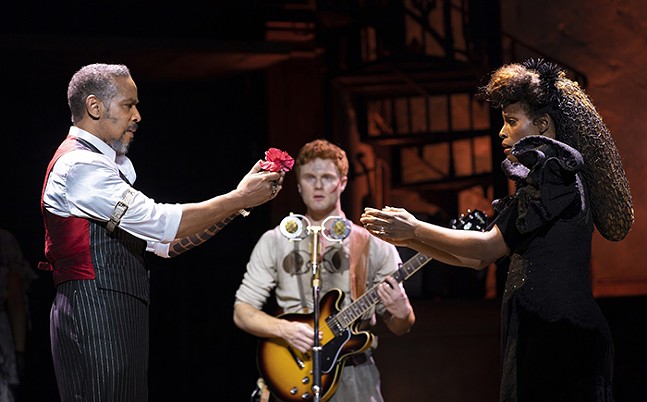 Tue., Nov. 15
The highly acclaimed, multi-award-winning show Hadestown arrives at the Benedum Center to take audiences on a fantastic mythical journey. The musical, which combines the tales of Orpheus and Eurydice, and that of King Hades and his wife Persephone, is described as combining the “beguiling melodies” of singer-songwriter Anaïs Mitchell and the “poetic imagination” of director Rachel Chavkin for a story that pits “industry against nature, doubt against faith, and fear against love.” 7:30 p.m. Continues through Sun., Nov. 20. 237 Seventh St., Downtown. $35-120. trustarts.org

Sat., Sept. 24
After three years in the making, the Carnegie Museum of Art is ready to debut the 58th installment of its prestigious, long-running Carnegie International exhibition. Titled Is it morning for you yet?, and curated by a team led by Sohrab Mohebbi, the much-anticipated show will feature new and historical works by over 100 artists and collectives from around the world. Organizers say the exhibition will trace “the geopolitical imprint of the United States since 1945 to situate the ‘international’ within a local context.” Continues through April 2023. 4400 Forbes Ave., Oakland. Included with museum admission. cmoa.org

Sun., Oct. 16
See artists who took matters into their own hands when the Westmoreland Museum of American Art presents Gatecrashers: The Rise of the Self-Taught Artist in America. Touted as the first exhibition “examining how self-taught artists working between 1927 and 1950 succeeded in the mainstream art world,” the show will feature 60 works from collections across the country and explore how artists without formal training “crashed the gates” of major museums in the United States, “diversifying the art world across lines of race, ethnicity, class, ability, and gender.” Continues through Feb. 5, 2023. 221 N. Main St., Greensburg. Free. thewestmoreland.org

Sat., Oct. 1
Play the field of libations at PNC Park during the Pittsburgh All-Star Craft Beer, Wine, and Cocktail Music Festival. This major event invites ticket holders to sample over 125 drink options from Pittsburgh and around the world. There will also be music by DJs and live bands, performances, yard games, beer pong, and more. 1-11 p.m. 115 Federal St., North Side. $39.95-79.95. ballparkfestival.com/pittsburgh

Sat., Oct. 22
Explore the wide world of coffee and chocolate while helping a good cause at The Meadows Casino. The Pittsburgh Coffee & Chocolate Festival welcomes visitors to expand their understanding of coffee roasts and styles, paired with chocolate-themed treats from Pittsburgh and surrounding area businesses. Learn about local coffee shops, gourmet roasters, artisan chocolatiers, bakeries, wineries and distilleries, and more. You can also meet adoptable animals at this event, which benefits Animal Friends of Pittsburgh. 12-5 p.m. 210 Racetrack Road, Washington. $35. thinkingoutsidethecage.org/events

For fans of nature and the outdoors

Wed, Sept. 21
Come on, come all to experience the Fall Flower Show: Blooms Under the Big Top at Phipps Conservatory and Botanical Gardens. Before the annual Holiday Magic! Winter Flower Show and Light Garden exhibit returns in November, don’t miss the conservatory’s fall show showcasing “stunning circus- and carnival-inspired botanical displays” full of autumnal blooms, from chrysanthemums to disbuds. Animal topiaries and funhouse mirrors, as well as a wooden carousel, will also add to the festive theme. Continues through Sun., Oct. 30. One Schenley Park, Oakland. Included with admission. phipps.conservatory.org
click to enlarge 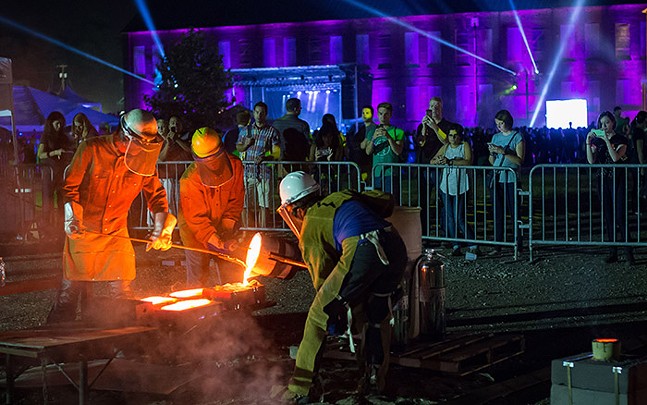 Sat., Oct. 8
Mark your calendars for Pittsburgh's "hottest event of the year" when the Festival of Combustion returns to Rivers of Steel’s Carrie Furnaces. Try your hand at creating mosaics and glass ornaments during the event's many workshops, and experience welding and iron casting at one of the on-site demonstrations. There will also be musical performances by local artists, hot air balloon rides, flame performances, and fireworks, all outdoors in the shadow of two remaining blast furnaces that once produced up to 1,250 tons of iron a day. 1-9 p.m. Carrie Furnace Blvd., Rankin. $20 for adults, under 18 free. riversofsteel.com

Sat., Oct. 15
The BikePGH Women and Non-Binary Program continues its mission of making bike culture more inclusive with the Women and Non-Binary Bike Summit. The event is described as encouraging conversation around biking, advocacy, and related topics while “increasing representation of people who have historically marginalized gender identities.” The summit will be followed by a group ride. 8 a.m. More details to be announced. bikepgh.org

Fri., Sept 16-Fri., Sept. 23
Designers, retailers, and artists will convene during Pittsburgh Fashion Week, a yearly event dedicated to showcasing the stylish creatives working in the city. Attend James Bond-themed soirees and receptions, participate in panels and workshops at the Summit, and see models in a myriad of new looks during the runway show in PPG Place. Continues through Fri., Sept. 23. Various locations. Individual ticket prices vary. pghfw.com/schedule

Fri., Nov. 18-Sun., Nov. 20
Be among fellow animal lovers when the Pittsburgh Pet Expo brings tons of activities, exhibitors, and more to the David L. Lawrence Convention Center. Expect cat shows, reptile exhibits, and live exotic animal encounters. Watch dogs dive, jump, and strut their stuff in a variety of competitions. Experience the utter cuteness of the National Dachshund Races and pet costume contest. There will also be opportunities to adopt a new friend, plus much more. Continues through Sun., Nov. 20. 1000 Fort Duquesne Blvd., Downtown. $6-12, free for pets and kids 5 and under. pghpetexpo.com