The end is very nigh in this global-scale disaster pic 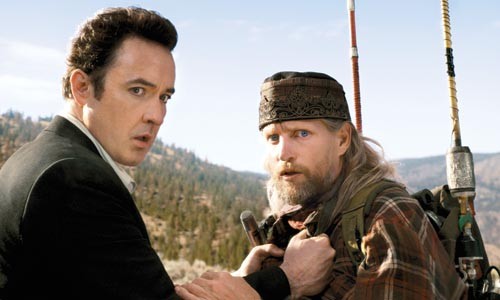 There was that brief moment after 9/11 when it was in poor taste to pimp out entertainment that relied on: 1) massive body counts; 2) collapsing skyscrapers; 3) planes flying into skyscrapers; 4) obliterating patriotic sites such as the White House or the Washington Monument; or 5) portraying mainstream politicians as self-interested money-grubbers in a time of unprecedented national crisis. As expected, that honeymoon of new sensitivity barely lasted a few months.

But I couldn't help remembering that curious time as I watched Roland Emmerich's mega-disaster pic roll out every one of the above-mentioned "new no-no's" in just the first half! Suffice it to say, if you like your cheesy entertainment on the apocalyptic, no-holds-barred scale, 2012 is for you! Billions dead, and all of planet Earth -- not just a few urban centers -- pulverized beyond recognition.

Basically what happens is that a giant solar flare bombards the earth with neutrinos, which causes the planet's core to overheat. That gets the tectonic plates all jumpy, resulting in earthquakes, volcanoes and tsunamis, all on the mega-mega scale. (Though 2012 does feature curiously behaving earthquakes that can be outrun.)

As with most disaster epics, there's a certain amount of filler to pace out the jaw-dropping, effects-heavy destruction. Some is necessary, like the scientists who figure out the impending crisis and explain it in authoritative but easy-to-understand terms; or the bit of backstory that sets up the skills our few heroes will need to tap. When Emmerich trots out the family-bonding moments, though, I groaned. But if your planetary epic-fail isn't complete without the wounds of divorce, miscegenation or economic disparity being healed, then sit back and enjoy.

For our human-scale dramas, we get a divorced dad (John Cusack), with two cute kids, an ex-wife (Amanda Peet) and her boyfriend (Tom McCarthy). On deck for authority are a government geologist (Chiwetel Ejiofor) and a top bureaucrat (Oliver Platt), working together on a rescue plan. To fulfill the genre's requirements for a crazy-quilt of characters, there are also: a bearded prophet of doom (Woody Harrelson); a Russian oligarch (Zlatko Buric); a beautiful, brainy art historian (Thandie Newton); a pair of cruise-ship musicians (Blu Mankuma and George Segal); and a Tibetan monk (Chin Han).

But 2012 is just a two-and-a-half-hour amusement-park ride. It's hard to get invested in characters who mostly gape in horror and scream "Run!" And unlike Emmerich's previous disaster flick, The Day After, which could have been read as a cautionary tale about global warming, 2012 can't resist dropping jokes into the action. A bickering boyfriend says, "This is pulling us apart," the second before a quake splits the floor in half. And as the earth collapses, a top U.S. official grudgingly admits: "Those nutbags with the cardboard signs were right all along."

Emmerich, who co-wrote the story, borrows liberally from such noble Polyester Epoch classics as Earthquake, The Poseidon Adventure and The Concorde: Airport '79. A big chunk of 2012 also recalls this spring's final season of Battlestar Galactica, though that's just a coincidence. (Or a harbinger we shouldn't ignore!)

Viewers go to movies such as 2012 to be blown away by the vicarious destruction, so I don't want to give too much away. But, here are a few hints: Worst Commute Ever in Los Angeles; don't bet on Vegas; prayer doesn't save even the pope; and the death of the U.S. president (Danny Glover) is some kind of super-twisted joke.

But, as an unabashed fan of disaster pics, I left satisfied with what really matters: the scenes of geological meltdown. Emmerich clearly sat up late dreaming up unimaginable cataclysmic events, all lovingly depicted, that really raises the bar for the genre. What thrill is there now in watching even a major earthquake on screen, having already "experienced" the state of California dropping off into the ocean? In English, and various language, with subtitles.