A monumental exhibit really adds to the discussion about race

Race is, rightly, America’s inevitable issue, at or near the center of almost any discussion about almost anything. An art exhibit that advances that discussion more than pulls its weight, and so it is with 20/20: The Studio Museum in Harlem and Carnegie Museum of Art.

It’s an amazingly rich exhibit, imaginatively co-curated by the Studio Museum’s Amanda Hunt and the Carnegie’s Eric Crosby, and including works by 20 artists from each institution. This big show about America features mostly artists who are African-American, and its keynote image is “Abe Lincoln’s First Book,” a 1944 oil painting by Horace Pippin depicting a juvenile Lincoln, abed in a rude log cabin in the dead of night, reaching for a tome by candlelight. The hopefulness embodied in this work made by an African-American veteran of World War I, born 23 years after the Civil War — its faith in humanity, and in learning — is startlingly poignant, all the moreso for its self-taught but careful technique.

Turn left to find Russian-born Louise Nevelson’s “Homage to Martin Luther King, Jr.” (1974-85), a looming wooden sculpture painted matte black whose disembodied architectural components evoke King’s incompleted work. Lyle Ashton Harris’ photograph “Miss America” (1987/88) depicts a young black woman in whiteface, an American flag draped across her shoulders above her bare breasts. It’s as if to ask, “Whose flag?” and “Whose country?” — even as, nearby, Jasper John’s iconic “Flag I” (1973) asks, existentially, “What is the flag?” and Glenn Ligon’s text-based painting “Prisoner of Love #1” (“We Are the Ink That Gives the White Page Its Meaning”) asks, “What is the country?”

The section of the exhibit titled “Working Thought” provokes trenchantly, with three of Titus Kaphar’s “Jerome” paintings of imprisoned black men, with icon-like gold-leaf backgrounds, their mouths gagged by swatches of tar. Samples from Melvin Edwards’ Lynch Fragments series (first sparked by the death of Emmett Till) are furious — wall-mounted balls of pain welded from railroad spikes, chains, industrial bolts — and so, still, are excerpts from Kara Walker’s now-canonical series “The Emancipation Approximation,” the silhouetted figures’ cartoonishness ironically contrasting the historic brutality of slavery. A 1984-85 collaboration between Jean-Michel Basquiat and Andy Warhol, an annotated dollar sign, sardonically riffs on divergent attitudes toward capitalism.

In the “American Landscape” section, Noah Davis’ 2008 painting “Black Wall Street” memorializes a 1921 race riot that leveled an affluent African-American community, with muted, dreamlike imagery centered on a forlorn woman in white gloves. The strip of empty turf in the foreground echoes the compositions in Zoe Strauss’ nearby photos of neglected urban neighborhoods (a “Half House,” graffiti reading “If you reading this fuck you”) — moats at once separating viewers from the scenes, and implicating them. Two photos by Braddock-born LaToya Ruby Frazier juxtapose urban disinvestment (not “decay”) with personal trauma.

The exhibit’s literal centerpiece pairs, for the first time, photos by storied Harlem-based photographer James VanDerZee and Pittsburgh’s legendary Charles “Teenie” Harris. Their 13 images each give us indispensable glimpses of worlds rarely seen in mainstream media: black middle-class life, in VanDerZee’s parlor portraits of individuals and families (1915-37), and mid-century black street life, from Harris’ kids at a swimming pool to a proud woman shop-owner in the Hill District.

Pittsburgh is repped too by Thaddeus Mosely’s characteristically elegant sculpture “Georgia Gate,” part of a “Shrine for the Spirit” section that also includes Barbara Chase-Riboud’s stunning “The Cape (La Manteau),” a monumental garment fashioned from small copper plates, and Thornton Dial’s wildly vibrant painting “The Soul of the Tiger.” 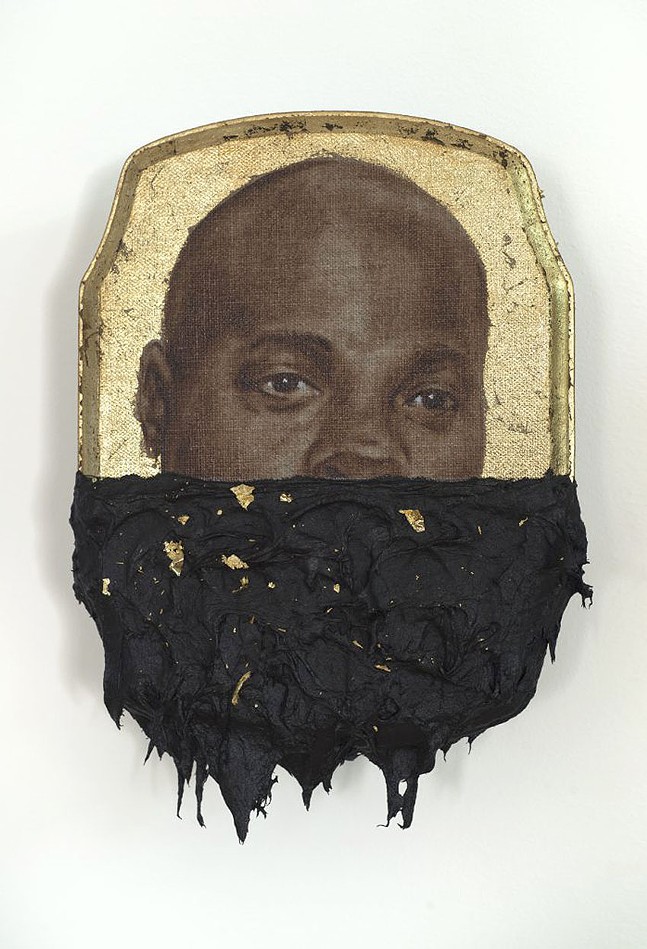 The final section, “Forms of Resistance,” includes: “Free, White and 21,” Howardena Pindell’s scathing 1980 video in which she recounts experiences with racism, and Eileen Gallagher’s “De Luxe,” an array of 60 prints of spoofishly amended pages from old African-American magazines, with ads for everything from new careers to wigs and skin-lightener. Collier Schorr’s “The First Lady (Diplomat’s Room, Rihanna, 20 Minutes),” based on an arresting fashion-spread shot of Michelle Obama, is meant to interrogate how we repurpose photographs, but might simply remind viewers that people of dignity once inhabited the White House.

The punning exhibit title 20/20 suggests hindsight, and much of this show is indeed retrospective, with works spanning nearly a century. But the final image you might see is among the newest. Kerry James Marshall’s “Untitled (Gallery)” (2016) depicts a stylishly dressed, dark-skinned woman standing proudly (and spotlit) by a framed image of a naked woman laughingly sprawled on a fur. She might be the person in the photo; in any case, she owns it, even as rafters reflected in the photo frame’s glass remind us of the bigger institution, one the woman likely doesn’t control. Marshall concisely reminds us of the need to change our ideas about who’s outside a discussion and who’s inside.

Greensburg native Sujata Day has already made it in Hollywood, but now she wants to bring her Pittsburgh experiences to the big screen