The family-run, takeout only, Caribbean and Jamaican eatery, which opened in early July, has a long history in Pittsburgh.

Before moving to Sharpsburg, 2 Sisters was 3 Sisters Caribbean, a similar concept in Wilkinsburg run by sisters Denise Josephs and Marlene Siddo. After closing in 2015 due to issues with their building, the sisters paired up with their sons, Michael Brown and Kwasi Prince, offering catering and popping up at events as 2 Sisters 2 Sons.

The menu at their Sharpsburg spot features traditional eats like jerk chicken, jerk shrimp, oxtail, goat curry, seafood, and much more. There’s a wide variety of sides and appetizers, and a full menu of vegan and vegetarian options. 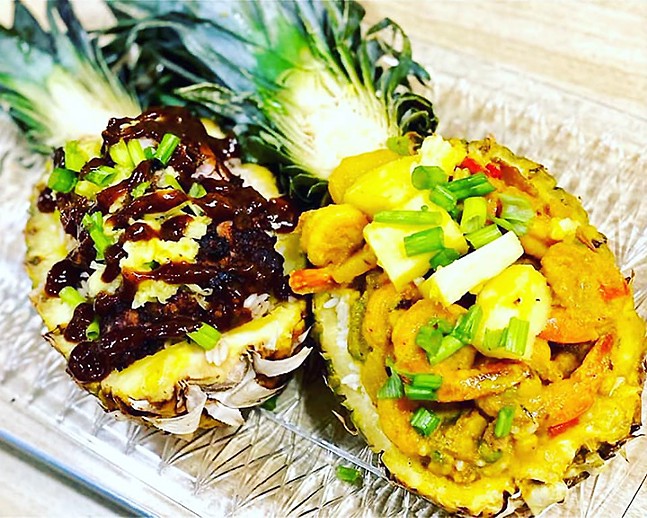 Photo: Courtesy of 2 Sisters 2 Sons
2 Sisters 2 Sons' Pineapple Bowl
“The response has been viral, and the amount of foot traffic that was brought to the location was overwhelming, showing us we had something very special that people enjoy,” 2 Sisters writes on their Honeycomb campaign page.

Brown says the second location, which they’re calling the 2 Sisters 2 Sons Jerk Center, will have a smaller menu. A mainstay will be their jerk pork, which is only served at the mother location on Saturdays.

To run the second location, the current team will split in half. Brown says this is partly the reason for a smaller menu; it’s easier to manage with reduced staff. The family is also hoping to turn 2 Sisters into a small-scale franchise, with plans to open a third expansion — another jerk center — sometime in the next year.

2 Sisters 2 Sons has 15 days left on their Honeycomb Credit campaign, with almost $20,000 invested of their minimum $50,000 goal. In addition to using the money for a down payment on the new location — Brown says they’re hoping for Oakland — the family plans to purchase new kitchen equipment. Their projected opening timeline is 30-60 days after funding.

Brown explains 2 Sisters is looking to expand specifically to neighborhoods that don’t currently have a Caribbean and Jamaican spot. He says if they can’t find a location in Oakland, they’ll look in West Mifflin or Plum.

Photo: Courtesy of 2 Sisters 2 Sons
2 Sisters 2 Sons' Jerk Salad
If they don’t reach the $50,000 threshold, 2 Sisters will receive no funds. But Brown says they plan to expand to a second location regardless, it will just be a bit slower without the investments.

“Honestly, we’ve done better than I thought,” Brown says, referring to the Honeycomb campaign. “We have an almost $20,000 investment, and honestly, I didn’t even know if we would get $500.”