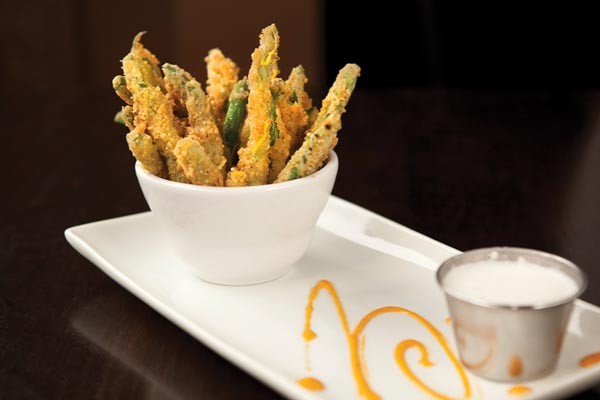 A couple of years back, local restaurant group B2 moved its old warhorse, the Elbow Room, to Walnut Street and installed a newer, hipper hangout, 1947 Tavern (named after the year of the Elbow Room's founding) in its place on Ellsworth Avenue.

Since then, there have been a few revisions. At first, the kitchen went lowbrow but high-concept with artisan mac-and-cheese, house-roasted meats served in sandwiches and as charcuterie, and a museum-grade bourbon selection — all in a darkly glowing barroom. A year ago, we saw an attempt at a fuller, more gastropub-like menu. Now, things have reverted to a spot somewhere in between, with hot sandwiches joining French dip and the house club, and pot pies joining mac-and-cheese as the kitchen's signature hot dishes.

Our first item, an appetizer of three blackened tilapia sliders, boded well for the expanded selection. Although not meaningfully blackened (that brief craze was overblown anyway), the thick pieces of tilapia "loin" were juicy and well seasoned, while a simple topping of crème fraîche spiked with lime zest offered a fresh alternative to tartar sauce.

The new menu still offers fries with various decadent combinations of pimiento cheese and tasty meats like short rib and bacon. But we ordered ours "naked," with Sriracha aioli on the side. The fries themselves were mixed russet and sweet, cut in the new style of broad, thin planks, and fried to a deep golden-brown. Their flavor was pretty good, but inconsistent cutting led to too much variation in texture: Some fries were practically chips, all crunch, while others were more like roasted potatoes, fluffy with hardly any crisp at all. The Sriracha aioli was mild, but addictive.

Mac-and-cheese is still made with local Fede pasta, but ours did not stand up to the transcendent memory of what we had when 1947 first opened. We ordered the simplest version on the menu: Vermont cheddar in a bechamel sauce, without any meat, veggies or pierogies (no kidding) cooked in. But we were taken aback by thick, tough crusts of broiled cheese on top.

Don't get us wrong: We love browned, broiled cheese on top of our creamy noodles as much as the next guy. But this dish was more like what happens when reheated pizza spends too long in the oven, and the off-putting texture dominated whatever flavor remained.

A gorgeous-looking burger topped with manchego and a layer of short rib looked promising. But the big 10-ouncer was either overdone or too lean to provide a suitable contrast with the short rib — which was tender enough, but far from the melting texture one hopes for from this fatty cut. The net effect was, essentially, that of a big mouthful of beef that wasn't especially interesting. A side of maple-glazed Brussels sprouts was a welcome substitution for fries or salad, but the sprouts themselves seemed barely cooked, tough and crunchy rather than tender from high heat.

Angelique tried the hummus melt, an intriguing option to a veggie burger or that non-vegetarian classic, the tuna melt. Hummus played the role of protein, of course, enhanced by a layer of black beans; a mix of mild, creamy provolone and nutty Swiss formed the "melt." A couple jalapeños contributed agreeable zing without actual heat, while toasting gave the white bread texture. The sandwich was hearty, health-foodish and satisfying — if not exactly exciting, flavor-wise.

The hot-pie section of the menu consists of three options: a turkey pot pie, a short-rib shepherd's pie and a portobello-based vegetarian pie. Short-rib shepherd's pie sounded like just the ticket for a cold winter's night. We envisioned something rich with the melted fat of buttery short-rib meat, balanced with the earthy-sweet flavors of winter root vegetables, and bubbling beneath creamy, smooth potatoes with crisp, brown ridges. But, in fact, scant shreds of short rib kept near-flavorless company with peas, carrots and corn kernels in a thick, cafeteria-grade glop, all beneath a floe of herb-flecked mashed potatoes. We were disappointed, to put it mildly.

1947 Tavern still has a tempting menu — even more so for aficionados of its alcoholic specialties, bourbon and rye — and its service and atmosphere remain superb. But we found the execution of the original menu superior to that of the current one, and await another makeover to lure us back.