If you go to the Pittsburgh Blues Festival's free kickoff "Mardi Gras Night," on Fri., July 25, don't expect any topless antics: The three-day showcase of 16 local and national acts is a family event, complete with kids' activities. But do expect to bring a bag of groceries as the price of admission; the festival at Hartwood Acres, now in its 14th year, is a benefit for the Greater Pittsburgh Community Food Bank.

Expect an evening of blues bands from Pittsburgh, Ohio, and two bands from the town that made Mardi Gras famous: Tab Benoit, with his smoky guitar and vocals, and Lil' Brian and the Zydeco Travelers, who contemporize traditional zydeco with James Brown-worthy guitar licks, hip-hop lyrics, and Lil' Brian himself on the funkiest accordion ever.

For blues from even further afield, it doesn't get much better than Saturday's headliner, Taj Mahal. His worldwide musical influences (including Hawaiian and West African) are as varied as his skill with musical instruments -- and he can play more than 20 instruments besides the guitar. After playing with just about everybody, he's stripped down his live show to the Taj Mahal Trio, featuring 30-year collaborators Bill Rich on bass and Kester Smith on drums.

Sunday wraps up the festival with a little of everything, from guitar slingers The Tommy Castro Band to banana-pudding slingers Southern Culture on the Skids. That's right: The trio behind the bizarre 1995 radio hit "Camel Walk" have been known to fling their favorite dessert into the audience. You know a food-bank benefit is doing its job when the band joins in on the act. 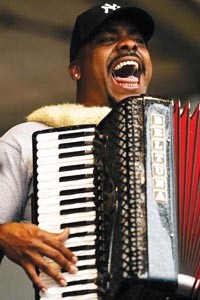 Lil' Brian and the Zydeco Travelers will perform at "Mardi Gras Night."