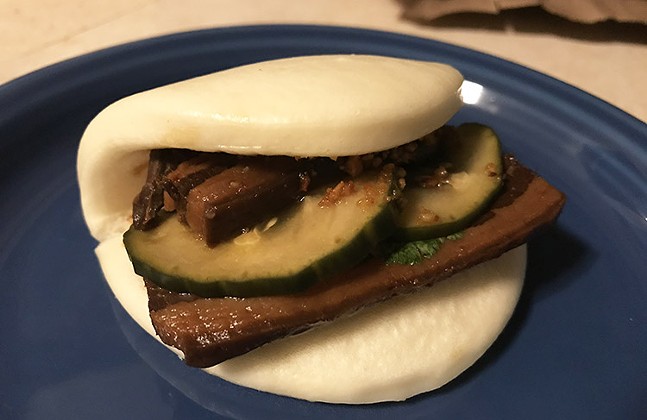 CP Photo: Ryan Deto
Mola's Pork Belly Bao
The Pittsburgh sandwich scene is dominated by Primanti Bros. The chain's french fry and coleslaw sandwich is synonymous with Pittsburgh, and it has spawned imitators and homages on menus throughout the region, and the nation. It’s good that Pittsburgh has a unique sandwich to call its own, but there is more to the city than French fries and coleslaw, no matter how popular.

Pittsburgh City Paper has highlighted 13 delicious, fairly unique sandwiches you might not be familiar with them, but you should definitely try. Any one of them could qualify as a signature Pittsburgh sandwich, behind the classic Primanti-inspired fry and coleslaw behemoth.

6018 Penn Ave., East Liberty. themolafish.com
No bread is softer and as moist as a Bao bun. And when stuffed with meat and fillings, yum. The Pork Belly Bao at Mola in East Liberty is the one to try. Succulent and rich pork belly perfectly complemented with the crunch of crushed peanuts, and crisp from pickled cucumbers and fresh cilantro. The peanuts really add a texture and nuttiness that take this bun to unexpected heights. Order a couple because the little sandwiches will be finished fast.

1825 E. Carson St., South Side. carmirestaurant.com
Po' boys are a Louisiana specialty, but the catfish po' boy from Carmi’s Soul Food in South Side is something Pittsburghers should call their own. The catfish nuggets are perfectly fried with a spiced, crunchy crust and a deliciously flaky middle. The fish is sustainable farm-raised and doesn’t have that strong lake water taste I usually associate with catfish. Combine that with a toasted roll, crisp lettuce and tomatoes, and a rich remoulade, and you have one perfect fish sandwich. 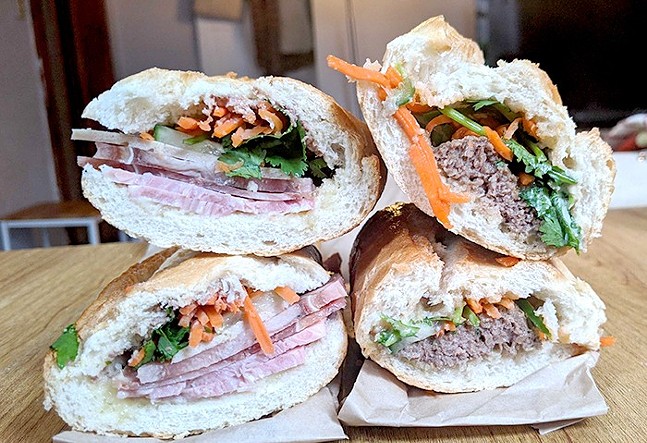 4502 Butler St., Lawrenceville. facebook.comBanhMiandTi
Though one of the most popular sandwiches in Asia, and many parts of the U.S., Pittsburgh hasn’t really been known for the banh mi, which is a Vietnamese sandwich made with marinated meats, picketed carrots, fresh cilantro and cucumbers, and paté, stuffed between a crusty baguette.

Banh Mi & Ti in Lawrenceville offers one of the best in Pittsburgh, and their Viet Special takes the cake. It sticks to the traditional script of pork roll, cured pork, and head cheese (which is not dairy, but a jelly terrine of pork meat from the pig’s head). This sandwich is loaded with meat flavor and the baguette is satisfyingly chewy and crunchy. Make it spicy with Sriracha and jalapenos.

1542 Beechview Ave., Beechview.
Similar to an Italian panini, tortas typically use grilled bread and are stuffed with slow-cooked meat, avocado, shredded lettuce, onion, cheese, and tomato. The lengua (aka beef tongue) version is packed with beefy flavor and the meat is tender and soft. The lengua meat is also chopped up into small cubes, so it’s not as off-putting as one might assume. The lengua torta is all the best Mexican flavors combined into a convenient, easy-to-eat sandwich.

3600 Forbes Ave., Oakland. mypiada.com
There are a lot of delicious Italian sandwiches out there in Pittsburgh; they are not hard to find. But, one relatively new chain located in Oakland is providing loaded Italian-style flatbreads and they really are unique. The Avocado Piada at Piada Italian Street Food is filled with pancetta bacon, arugula, mozzarella, fresh avocado, sweet corn, tomato, and basil aioli. Classic Italian flavors with a new twist. There is also a location in the North Hills.

2923 Penn Ave., Strip District. salemsmarketgrill.com
Thin slices off a giant meat log are always a welcome sight, and at Salem’s in the Strip District, you can get shawarma (beef, lamb, or chicken) meat stuffed into a chewy nan bread. The Desi Shawarma Sandwich is a behemoth that adds fresh lettuce, purple onions, and a garlicky yogurt sauce to compliment the meaty shawarma. The use of the nan really takes this from a simple gyro to a hearty and delicious classic.

4141 Old William Penn Highway, Monroeville
Indian cuisine sort of has sandwiches too. Paratha is an Indian flatbread, and at Udipi Cafe in Monroeville, the Aloo Paratha is stuffed with potatoes and spices. It’s like an Indian version of a pierogi that you can eat easily with your hands. No reason Pittsburghers shouldn’t love it.

Posted by Back To The Foodture on Saturday, December 12, 2020

Lil Poppa - Back to the Foodture

378 Broadway Blvd., Pitcairn. instagram.com/back2thefoodture
Known for its massive portions and gut-busting meals, Back to the Foodture in Pitcairn (and soon to be in South Side) also offers smaller sandwiches, and the Lil Poppa is one of the best. It’s basically Back to the Foodture’s take on a Luther Burger. Two glazed donuts act as the buns for a bacon cheeseburger topped with an egg and barbecue sauce. It’s rich, decadent, and it will knock you out. But while the Lil Poppa is the smaller version, the Big Poppa adds another donut and hamburger patty. Beware.

5107 Penn Ave., Garfield. spakbrothers.com
Cheesesteaks don’t have to be made with beef, or ever meat, and the Seitan Cheesesteak at Spak Brothers in Garfield proves it. Sure, Spak’s version isn't authentic Philly style with just grilled onions and cheese, but it’s an amazing sandwich nonetheless. Similar to Philly cheesesteaks, the seitan sandwich is best with cheese sauce. Spak’s version also comes with mayo, lettuce, tomato, onion, green peppers, and mushrooms. An all-veggie sandwich, when you are looking for meat flavors.

4606 Penn Ave., Bloomfield. aptekapgh.com
Sandwiches can be made vegan too, and the Baba Jaga at Apteka in Bloomfield is the perfect example of not sacrificing flavor or texture when avoiding meat and cheese. In-house, naturally leavened light rye bread surrounds baked buckwheat/vegetable paté, pickled beets, smoked onion remoulade, pickled cucumber, dill, Apteka’s house mustard, and onion. It's filling, with contrasting sour, smokey, and herby notes. If you enjoy Eastern European flavors this sandwich is a must.

Check Apteka on social media, as the restaurant rotates its menu often, especially during the pandemic. Right now they have switched their menu to vegan burgers for all of January.

620 Brookline Blvd., Brooklline. pitaland.com
German and Turkish cuisine have combined to make one of the world’s most delicious sandwiches: the Döner Kebab. A delicious mix of gyro meat or falafel, crisp lettuce, onions and tomatoes, and garlic sauce, all on grilled bread. And Pita Land in Brookline has their own version sure to satisfy.

Their Döner-Style Pita Sandwiches are basically super-sized versions of their famous pita sandwiches, only grilled on a panini press. The grilled pita really takes the sandwich to the next level. Customize yours with gyro, falafel, chicken shawarma, or beef, and choose from a wide array of sauces.

600 Brookline Blvd., Brookline. oakhillpost.com
Even though meatloaf already has some bread baked inside, it still makes for a hell of a sandwich. Oak Hill Post in Brookline has taken the Pittsburgh sandwich scene by storm as of late, and their Bat out of Hell sandwich is one to try. Their take on a Reuben is a big slab of meatloaf, sauerkraut, fontina cheese, Dijon mustard, and special sauce, all on crunchy slices of grilled bread. Could be a new Pittsburgh classic.

wisecountybiscuits.com
Pittsburgh is in the Appalachian region, but it has never really adopted Appalachian food. Wise County Biscuits is trying to change that, and their Sallie’s Snack is a valiant effort. A big, fluffy biscuit sliced in two, then stuffed with a fried egg, pimento cheese, and Southern-style Chow Chow (a pickled relish usually made of chopped tomatoes, onions, bell peppers, and cabbage). It’s a perfect breakfast sandwich.

Check Wise County Biscuits' schedule and social media, since they don’t have a brick-and-mortar location, but are active at farmers markets and outside coffee shops around Pittsburgh.