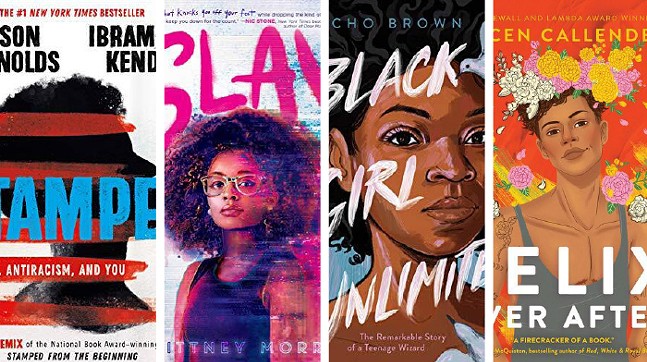 I've noticed a trend on bookstagram, aka book Instagram. On top of the influx of readers looking to pick up books from Black authors, many have been turning to the Young Adult genre. This could be for any number of reasons, but my guess is that YA is light but powerful, enthralling yet easy to read. You can take a lot away from a book geared towards teens, but the stories are a great escape from our current daunting and heavy reality. So, if you're feeling the same way, here are 12 YA books written by Black authors.

1. Clap When You Land by Elizabeth Acevedo

Clap When You Land is the newest novel from Afro-Dominican poet and author,
Elizabeth Acevedo. The story follows half-sisters Camino and Yahaira Rios, who live in the Dominican Republic and New York City, respectively. They only find out about the existence of each other after the father they share dies in a plane crash.

Acevedo is known for writting novels in verse, and the author of With the Fire on High and The Poet X, which won the 2018 National Book Award for Young People’s Literature.

Entrenched in magical realism, this heavily biographical YA novel follows Echo Brown, a wizard from the East Side who transfers to the rich West Side school. As this happens, new portals begin to open, and Echo realizes there is a black veil of depression following her.

3. Children of Blood and Bone by Tomi Adeyemi

Released in 2018, this gripping fantasy novel tells of magical redemption and uprising.

4. The Black Flamingo by Dean Atta

A debut from Dean Atta, this coming-of-age verse novel follows Michael, who is a mixed-race gay teen growing up in London. He eventually discovers the wonderful world of drag.

5. Felix Ever After By Kacen Callender

Felix Love is a transgender teen who has never been in love. When he starts getting transphobic messages and begins plotting revenge, he finds himself in a quasi-love triangle.

6. You Should See Me in a Crown by Leah Johnson

A poor Black girl living in a Midwestern town, Liz Lighty plans to get away by attending Pennington College. She wants to become a doctor. But when her financial aid falls through, Liz puts herself in the running to become prom queen — an honor that also comes with a scholarship.

In this collection of personal essays, journalist and LGBTQIA+ activist George M. Johnson shares his memories from childhood through college, like going to flea markets with his caring grandmother and bullies kicking his teeth in at the age of 5.

8. Stamped: Racism, Antiracism, and You by Jason Reynolds and Ibram X. Kendi

A re-imagining of Dr. Ibram X. Kendi’s National Book Award-winning Stamped from the Beginning, this book shines a light on the many subtle forms of racist ideas, while showing ways one can identify and stamp out racist thoughts in their daily lives.


9. The Hate U Give by Angie Thomas

This YA novel turned movie was written by Angie Thomas in reaction to the police shooting of Oscar Grant, a Black man killed by transit-police officers in Oakland, Calif. in 2009.

For fans of Ready Player One, SLAY follows seventeen-year-old Kiera Johnson, who is secretly the creator of the multiplayer online role-playing card game called SLAY. All is fine until a teen is murdered over a dispute in the game.

11. The Stars and the Blackness Between Them By Junauda Petrus

This lyrical debut from Junauda Petrus tells the story of Audre and Mabel, whose romantic relationship is rocked when Mabel finds out why she has been feeling sick all summer.

12. A Song Below Water by Bethany C. Morrow

Set in Portland, Ore., Black mermaids Tavia and Effie have been able to keep their powers a secret until the murder of a siren rocks the nation.