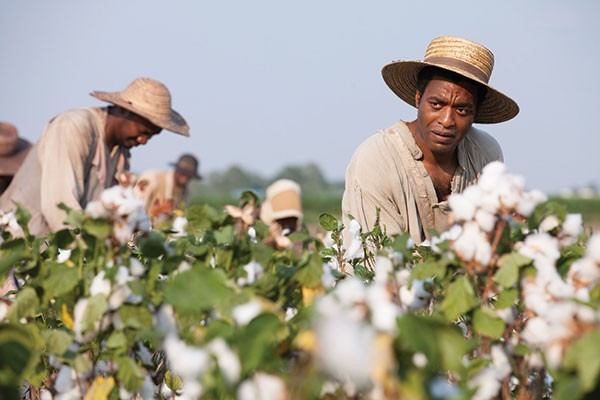 In 1841, African-American Solomon Northup (Chiwetel Ejiofor) lives in Saratoga, N.Y., with his family; he is prosperous, educated and moves freely and convivially about town. Then, on a trip to Washington, D.C., Northup is abducted and sold into slavery. He is re-named "Platt," and transported to Louisiana. There, he becomes the property of the relatively kind William Ford (Benedict Cumberbatch), before being re-sold to a far crueler and debauched owner, Edwin Epps (Michael Fassbender).

This real-life history is recounted in 12 Years a Slave, adapted from Northup's eponymous memoir by British filmmaker Steve McQueen (Hunger, Shame). McQueen's project is ambitious, seeking to depict one man's historical experience while presenting a larger critique of slavery in America, without resorting to the tropes and clichés that the subject often evokes.

In this latter respect, 12 Years isn't wholly successful: Some moments feel self-consciously showy or overplayed. Likewise, the celebrity of some of the supporting actors can be distracting (the comical Paul Giamatti, the sainted Brad Pitt). But as a whole, this is a compelling and provocative film, anchored by a career-best performance by Ejiofor.

Per his usual style, McQueen lays back on typical plot beats. The film is a series of snapshots, moments both brutal and banal taken from a 12-year span in which one man fights to have a story at all. It's a gutsy approach to mainstream filmmaking — especially for difficult subject matter, which is generally mitigated with a personal, relatable narrative.

As Northup/Platt, Ejiofor has much to convey, and few lines other than "yes, master" to express himself. Platt's plight is complicated by his knowledge of life as a fully realized free man, which makes his new status as a disposable tool especially devastating. En route to Louisiana, another slave advises him that his safety depends on playing the dumb beast: "Tell no one who you are, tell no one you can read." This suppression of identity also feeds his second existential struggle, which the film establishes as universal among the slaves: whether to simply survive, at whatever cost to the self, or to live, and risk punishment or death?

In a film critical of slavery we expect scenes of physical abuse — the beatings, rapes and back-breaking labor. But McQueen also outlays more complex psychological miseries: the perversion of religion in the name of slavery; the complicated power dynamics between slaves and between non-slaves; and the pervasive threat of violence.

12 Years continually underlines how significant slavery was to the growth and wealth of this country. The opening scene, in which Platt and other newcomers are schooled in cutting cane, establishes the real value of slaves: an inexhaustible, virtually free labor force. Repeatedly in 12 Years, slaves are quantified in economic terms — by work potential, by pounds of cotton picked, by their usefulness as debt repayment. But broad social costs exist as well, from the micro (families separated) to the macro, in which slavery is depicted as a morally bankrupt institution that leaves no one untainted by its poison.

12 Years is beautifully filmed, with a keen eye toward the conflation of beauty and horror. In one gorgeous shot, the camera travels through a seemingly endless field of cane ... the same field that a group of slaves have been tasked with cutting, the landscape's endless bounty now an endless labor.

We watch McQueen's film with the security that Platt's story has a "happy" ending; after all, he only needs to serve out 12 years. But the ending is still discomfiting. Platt is freed from bondage, but there is no justice, and the economic and social institution he was imprisoned in is left intact. As the improbably fortunate Platt leaves the plantation, the camera scans those slaves left behind. History has written no escape clause for their misery: At best, there's seven more years of hard labor, then a five-year war, before the "freedom" to live on in abject poverty.