“Unlearning gender means boys and girls should express themselves the way they want to.”

Drag queens and kings perform as caricatures of gender, playing up the most extreme ends of the gender spectrum and creating larger-than-life characters who entertain through their exuberance or humor, and sometimes both. Drag artists lip-sync and perform routines that push boundaries to make crowds respond with laughter or screams of delight.

The art of drag has been around since the late 19th century, but drag is part of popular culture now. Its popularity is, in part, due to the smashing success of TV’s RuPaul’s Drag Race, a highly entertaining drag competition and reality show that wrapped its ninth season this summer. In the city of Pittsburgh, there are places where you can see local and national drag performers bring the house down, be it Blue Moon, in Lawrenceville; Cruze, in the Strip; or Glitter Box Theater, in Oakland.

In addition to being a space of gathering for the queer community, drag shows have been a central component of the LGBTQ civil-rights movement. Queens have been central to the revolution since its inception, leading the protests and riots in the Compton Cafeteria, in 1966, and New York City’s Stonewall Inn, in 1969, pushing back against police brutality and discrimination.

Drag continues to be a place where queer folks can push boundaries, especially when it comes to gender identity. And it is in this space of gender exploration that Esai Varela, a 12-year-old drag queen who performs as E! The Dragnificent, thrives. It’s all a part of their mission to change the way people see gender.

E!, a musical-theater student at the Pittsburgh Public High School for the Creative and Performing Arts, first got the itch to take up drag performance around the age of 10.

“I was in a show called Come Play With Me, and I saw all the lovely drag queens there, but also knowing so many drag queens my whole life, it just made me want to do it because it looked really fun,” they say.


From the time E! was walking, their mother Dre Varela confirms they were playing with traditional gender boundaries.

“They were putting on my stiletto heels when they were 3. I once found a bright red pair of my stilettos under the crib, and I asked my roommate at the time if he put them there,” laughs Varela. “Then I caught Esai shuffling around in them, in nothing but pull-ups, and I was like, ‘Oh my god!’”

But that’s not the only thing that defines them. E! loves comedy, is a member of the Hope Academy at East Liberty Presbyterian and is also a ukulele enthusiast.

And the arts definitely run in E!’s family. E!’s father is a visual artist, and Varela is a burlesque and variety performer. When E! was 4, Varela ran a dance studio out of the home.

“I had a dance studio in my house, and since I produce a burlesque and drag troupe, all my friends would be over, and we’d be rehearsing,” says Varela. “I had a roommate at the time who was a very flamboyant drag queen himself, so Esai was always around very colorful people and would get into the costumes.”

E! would tag along to rehearsals all over the city dressed in princess gowns.

“It had never even occurred to me that E! would want to perform in drag,” says Varela. “But [performing] is something that’s always been in his blood, and it was just what he gravitated toward.”

On the Facebook page for E! The Dragnificent, Varela posts videos of her child in extravagant, creative costumes. In one video, E! uses a sparkly, blue bed canopy as an ornate crown and veil.

“They’ve always lived in my closet, so much of what I buy ends up in theirs, and because so many of my friends also perform, E’s always getting hand-me-downs of makeup and costumes,” says Varela. “They’re really lucky!”

E! has two “fairy drag fathers,” as Varela calls them, a couple living in Columbus that hand down all their costumes to E!. Additionally, other queens and dancers share looks and makeup with E!, and the queen community has also been supportive and full of advice.

“They tell me to keep up my fire, and keep doing what I’m doing because it’ll all pay off, and that feels amazing,” says E!. “They’re really supportive.”

And so far, that advice is ringing true. After just a few years of drag performances, E! The Dragnificent will be headlining at the Austin International Drag Festival the second weekend of November.

5 Questions with Bob the Drag Queen 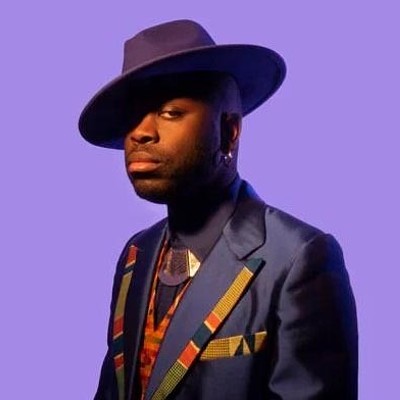