This account of the first U.S. battle in Afghanistan is both dusty history and uninspired 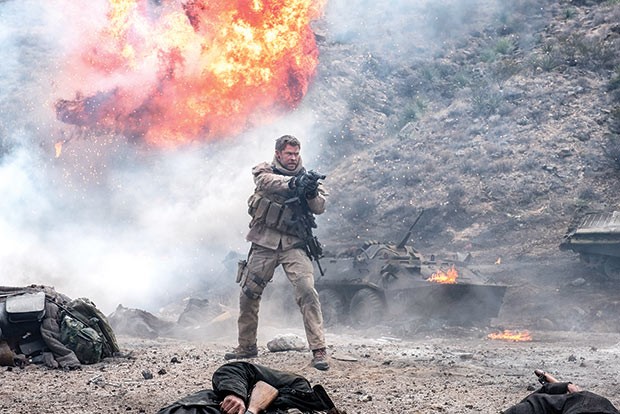 Whatever has been going on in Afghanistan is now the United States’ longest war, but the conflict hasn’t generated many related movies. The best of them were grim documentaries, and the oddest was about a dog. Chalk it up to public disengagement, an unclear purpose or, most likely, a lack of easily encapsulated victories. So the revelation of a previously classified mission that was tailor-made for Hollywood — manly men go into danger zone and make quick work of bad guys, then leave — surely held appeal.

But it’s 2018, and 12 Strong, based on Doug Stanton’s book, Horse Soldiers, about events of 16 years ago, feels too-little-too-late for the rah-rah crowd. And, as directed by Nicolai Fuglsig, too uninspired for fans of war movies, wherever they’re set.

There’s quite a long set-up, including a good 15 minutes about Sept. 11. (They told us to never forget, and we haven’t.) Then, in October 2001, military personnel set up on the Uzbekistan/Afghanistan border, and prepare to take out Taliban strongholds. A dozen Army Special Forces are assigned to clear out the town of Mazar-e-Sharif, in the mountains … on horseback. The plot is basically a budget Western, in which the bad guys are trapped in a canyon, then attacked from above. Here, the villains are black-clad Taliban, and the white hats are Army guys, loaded up with 100 pounds of high-tech gear and plopped on horses.

The dialogue is turgid hero-speak — “There’s no playbook for this mission, we’re gonna have to write it ourselves” — broken up by the sort of joshing that is movie shorthand for male bonding. Not that you’ll really care — not even the stars get any character development, and the cast breaks down like so: Thor-in-fatigues (Chris Hemsworth), Michael Shannon (in save-power mode), a Latino guy (Michael Peña), a black guy (Trevante Rhodes), the guy with the pretty hair, the guy with weird glasses, seven other he-men and winsome native child.

12 Strong sets up “tense” situations — high-altitude helicopter ride, arduous landscape, impending winter weather — that wind up not being so. Sure, there’s some noisy gun battles with the enthusiastic, well-armed Taliban, but our side also has a B-52 dropping bombs. (Jerry Bruckheimer is a producer, and unsurprisingly, there are scenes where things just explode because it looks cool.)

After the mythic good-vs.-bad narrative is exhausted, the film includes this signpost to reality, delivered by a battle-weary Afghan commander: “There are no right choices here — this is Afghanistan, graveyard of empires … so Americans will become just another tribe here: Cowards if you leave, enemies if you stay.” So, the first battle was a success, but the war — not such an easy story to tell.