12 Peers tries a show with no rehearsals; Quantum takes Ibsen to the ninth floor

At its most basic, theater is an actor with a script. And that’s just what you’ll get in White Rabbit Red Rabbit, a striking work that shuns directors, sets and rehearsals — and even prohibits the lone actor from seeing the script before stepping on stage. Or really, “actors,” because as the play requires, each of the 17 performances in 12 Peers Theater’s Pittsburgh-premiere production features a different performer.

12 Peers is the latest in an international array of troupes to attempt this work by Iranian playwright Nassim Soleimanpour. The narrative featuring allegorical animals tells a story about social conditioning. London’s The Guardian called it “a global hit” and “a tense, entrancing piece of theatre.

Although Soleimanpour wrote the play during a period when he couldn’t leave Iran, he insists that White Rabbit is not about his home country, but rather is universally applicable.

The actors, meanwhile, are in for a 65-minute adventure at Pittsburgh Playwrights Theatre Co.’s intimate space. “They’re experiencing the piece for the first time, as the audience is,” says 12 Peers artistic director Vince Ventura. 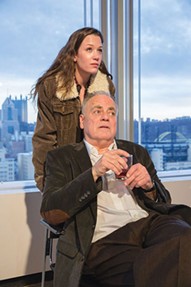 
“Castles in the air”: Ibsen’s iconic architect, Halvard Solness, wants to build them. Fascinated by the younger generation, the aging Solness is also threatened by it, even as he’s reinvigorated by the appearance of a younger woman named Hilda.

But the production significantly co-stars its venue: Quantum, which makes site-specific theater in nontraditional spaces, is reanimating the ninth floor of the North Side’s former Two Allegheny Center, now known under new ownership by Faros Properties as Nova Place. Working with the Heinz Architectural Center of the Carnegie Museum of Art, Quantum translates Ibsen’s Victorian-era setting to the mid-20th century, and emphasizes this former office building’s unornamented mid-century-modern style — and 360-degree view — as an analogue for Solness’ grandiose architectural visions.