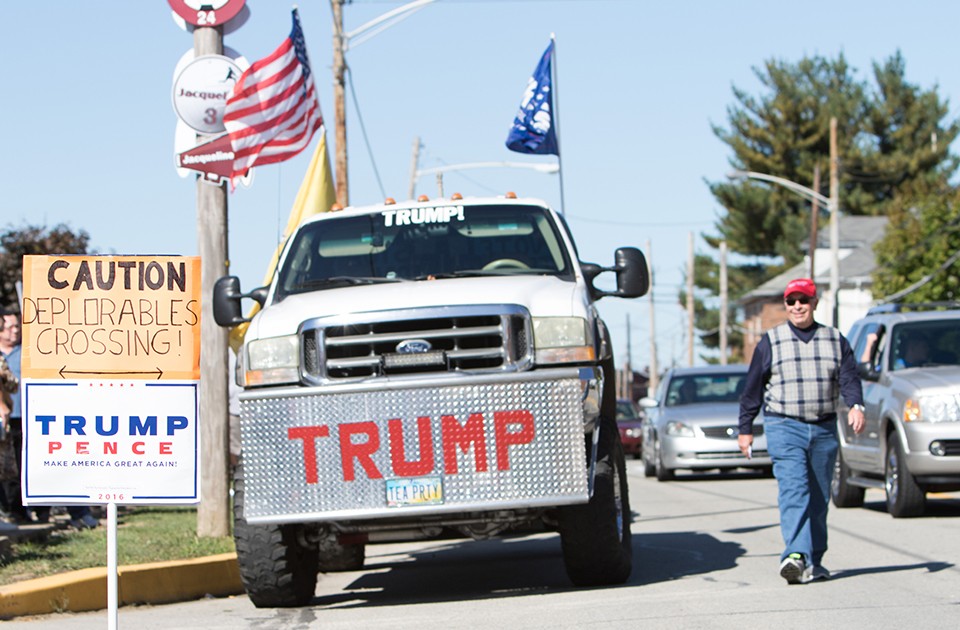 • Supermarkets in several states pull bags of frozen hash browns after a recall notice explains that the product could be “contaminated with extraneous golf ball materials” that “may have been inadvertently harvested with potatoes used to make this product.”

• Trump makes news announcement via Twitter: He’ll hold a “BIG rally” in Harrisburg next Saturday night, and to look for “Big TAX REFORM AND TAX REDUCTION” on Wednesday.

• In celebration of Earth Day, scientists and their supporters turn out for marches worldwide.

• Online news outlet The Daily Beast announces “Trump-Free Sunday Mornings.” Just Sunday, though: “The simple fact is that this administration has already proven too fond of Friday night news dumps to credibly promise a Trump-free Saturday.”

• Trump gives an interview with the AP, in which Trump complains about the unfair media (“Face the Nation or as I call it, Deface the Nation”); teases his tax plan (“It will be bigger, I believe, than any tax cut ever”); reviews his February Joint Address before Congress (“Some people said it was the single best speech ever made in that chamber”); and imagines Lincoln’s chances today (“If Abe Lincoln came back to life, he would lose New York and he would lose California”).

• The Daily Beast reports that the Senate Intelligence Committee investigating Russian meddling in the presidential election has no full-time staff, nor has it interviewed any key figures.

• French voters head to the polls for a presidential primary. The two top candidates, right-wing populist Marine Le Pen and centrist Emmanuel Macron will now face off on May 7.

• Astronaut Peggy Whitson surpasses the 534-day record for most time in space by an American. She receives a call from Trump, who muses about space travel: “And, all over, we have astronauts and we have everybody, who are flying right now, 17,000 miles per hour. That’s about as fast as I’ve ever heard. I wouldn’t want to be flying 17,000 miles an hour. But that’s what you do.”

• In advance of the vote on federal spending to avoid a possible government shutdown on Saturday, Trump stresses the importance of the border wall. The concluding “If” of the first tweet hangs for three hours until the second tweet is sent.

• A blog post touting the Florida resort of Mar-a-Lago, owned by President Trump, is discovered at Share America, a State Department program for U.S. embassies. After complaints, it is taken down.

• “I am sad that I am not on television anymore.” — Deposed Fox News host Bill O’Reilly returns, on his No Spin News podcast

• Trump backs off demands for the immediate funding of a border wall, and it will not be included in a GOP plan for a short-term spending bill to avert a government shutdown on Saturday.

• It’s announced that former U.S. Attorney General Sally Yates and former Director of National Intelligence James Clapper will testify on May 8 before a Senate judiciary investigation about Russian interference in the election.

• Sen. Ted Cruz introduces the Ensuring Lawful Collection of Hidden Assets to Provide Order (EL CHAPO) Act, which seeks to use any forfeited assets of the imprisoned Mexican drug-cartel kingpin to pay for the border wall.

• A federal district judge in San Francisco bars the enforcement of Trump’s executive order which would have withheld funds from “sanctuary cities” that don’t comply with federal immigration demands.

• Filmmaker Jonathan Demme dies. Among his enduring hits: the Talking Heads concert film Stop Making Sense, and The Silence of the Lambs, filmed in Pittsburgh.

• Nearly the entire Senate buses to the White House for a briefing on North Korea. Later, on CNN’s Erin Burnett OutFront, Oregon Democratic Sen. Jeff Merkley says, “We learned nothing you couldn’t read in the newspaper.”

• The Department of Homeland Security announces the opening of the Victims of Immigration Crime Engagement (VOICE) office. It provides a toll-free number “to serve the needs of crime victims and their families who have been impacted by crimes committed by removable criminal aliens.”

• The revised GOP health-care bill, which allows states to opt out of Essential Benefits and the protections for pre-existing conditions, wins the support of the conservative Freedom Caucus.

• “We’ll vote on it when we get the votes.” — House Speaker Paul Ryan, on the revised Republican health-care bill

• After speaking with Mexican President Enrique Peña Nieto and Canadian Prime Minister Justin Trudeau, Trump agrees not to pull out of the NAFTA trade agreement.

• United Airlines announces it will now pay up to $10,000 to voluntarily bumped passengers.

• The president of Argentina, Mauricio Macri, visits the White House and citrus is on the agenda. “I’ll tell him about North Korea, and he’ll tell me about lemons,” says Trump.

• The new VOICE hotline for reporting crimes by undocumented aliens is receiving calls about space aliens.

• Soon after, the White House clarifies that the new tax plan would not affect 401(k) tax exemptions.

• House Republican leaders delay a vote on the revised health-care bill until next week.

• Congress approves a spending deal to keep the federal government open through May 5.

• Trump speaks at the annual National Rifle Association meeting today at the Georgia World Congress Center, in Atlanta. As with all presidential appearances, attendees are required to check their guns.

• During his speech to the NRA, Trump refers to Sen. Elizabeth Warren as “Pocahontas”: “You’ll have plenty of those Democrats coming over and you’re going to say, no, sir, no thank you — no, ma’am. Perhaps ma’am. It may be Pocahontas, remember that. [Laughter and applause.] And she is not big for the NRA, that I can tell you.”

• The federal Bureau of Economic Analysis releases its report showing that during the first quarter of 2017, the economy grew at 0.7 percent.

• The National Security Agency says it will halt its collection of American emails that mention foreign intelligence targets.

• North Korea test-fires a ballistic missile. The USS Carl Vinson is expected to arrive in nearby waters.

• Tens of thousands turn out in Washington, D.C., and other cities for the People’s Climate March.

• LOCAL: Pittsburghers arrive at Downtown’s Market square for I Wish to Say, a traveling public performance piece. There, retro-styled women, using manual typewriters, type up letters, dictated by the public, to be sent to President Trump.

• Comic Hasan Minhaj hosts the White House Correspondents Association dinner, the annual event in which, traditionally, the sitting president is lightly roasted, and in turn, the president lightly jabs the press. For the first time in three decades, the president does not attend, and Minhaj explains why: “The leader of our country is not here. And that’s because he lives in Moscow, and it’s a very long flight. ... As for the other guy, I think he’s in Pennsylvania because he can’t take a joke.”

• Also in Washington, D.C., Full Frontal’s Samantha Bee hosts the televised Not the White House Correspondents Association Dinner, in which she pleads for cable news to be more professional and accountable, and to curtail its “pundit infestation.”

• Trump holds a rally at the Farm Show Complex, in Harrisburg, Pa. He repeats some popular campaign messages (the wall, “The Snake”) and bashes the media, Obamacare and the Washington swamp. The crowd yells “Lock her up.”