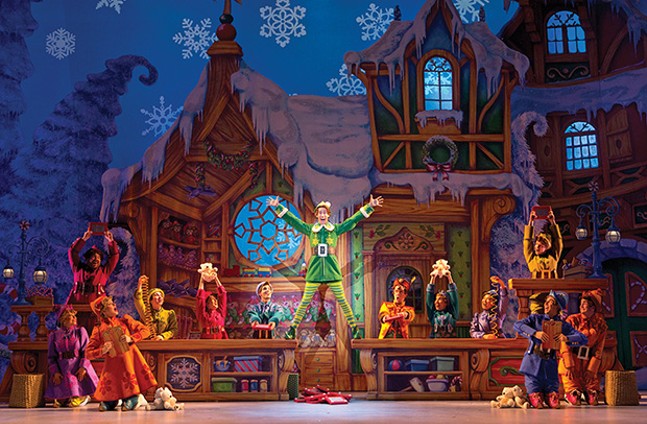 A Charlie Brown Christmas-Live on Stage!

Join Charlie Brown, Snoopy, Linus, and the rest of the Peanuts gang when the Byham Theater brings a holiday classic to life. Adapted from the 1965 TV special, the live stage musical follows Charles M. Schulz’s beloved comic strip characters as they try to rehearse their Christmas play, only to get caught up in the crass consumerism of the season. The show features the original jazz score by Vince Guaraldi, as well as holiday carols. Sun., Nov. 25. 2 p.m. and 5 p.m., 101 Sixth St., Downtown. $30-40. trustarts.org

The August Wilson Center welcomes adventurer Hilaree Nelson for an event about courage and perseverance in the face of incredible odds. Considered the first woman to summit Everest and its neighbor peak Lhotse in a single 24-hour period, Nelson takes the stage to describe how, in 2014, she and a team from National Geographic embarked on a harrowing journey to the summit of Hkakabo Razi, believed to be Myanmar's highest mountain. Dramatic stills by photographer Cory Richards and clips from Renan Ozturk's documentary, Down to Nothing, will accompany the talk. Wed., Nov. 28. 7:30 p.m. 980 Liberty Ave., Downtown. $25-45. trustarts.org

Award-winning actress and all-around entertainer Jane Lynch brings a bit of holiday cheer to the Greer Cabaret Theater with her A Swingin' Little Christmas tour. Joined by Kate Flannery (most notable for her role as Meredith on the NBC series The Office), music producer Tim Davis, and The Tony Guerrero Quintet, Lynch and company sing selections from her retro-inspired Christmas album, including classics like “Jingle Bells” and “Up on the Housetop,” as well as original works like “Winter’s Never Cold (When You’re Around).” Mon., Dec. 3. 7 p.m. and 9:30 p.m. 655 Penn Ave., Downtown. $45-55. trustarts.org

Bricolage sets aside the argument over whether or not Die Hard is a Christmas movie for a Pittsburgh spin on the 1988 action flick starring Bruce Willis as wisecracking super-cop, John McClane. The Midnight Radio players bring to life all the explosions, glass-shattering gunfire, and other fun craziness of the film with Foley work and voice acting. The show includes live audience participation, cued on anytime the applause sign flashes. Yippee ki-yay. Thu., Dec. 6- Sat., Dec. 22. Times vary. 937 Liberty Ave., Downtown. $25-35. bricolagepgh.org

John Waters is more naughty than nice when he returns to Pittsburgh to present the latest edition of his one-man spoken word holiday show. A John Waters’ Christmas: Holier & Dirtier at the Carnegie Lecture Hall gives the legendary writer/director a chance to express his love of Christmas, all while adding his incisively funny takes on the chaos of the season. Get ready for questions about the sexuality of Santa’s reindeer, protesting nativity scenes, and other provocative subject matter. Sat., Dec. 8. 8 p.m. (doors at 7 p.m.), 4400 Forbes Ave., Oakland. $25-125. warhol.org

The Benedum Center puts a twist on a holiday favorite when it presents The Hip Hop Nutcracker. Set in 1980s Brooklyn, the live show substitutes ballet with hip-hop choreography for a contemporary take on Tchaikovsky’s enduring work. Featuring guest MC Kurtis Blow, a dozen dancers, digital scenery, and an electric violinist, the reimagining transports young Maria-Clara and her Nutcracker prince back in time to the moment when her parents first meet in a nightclub. Tue., Dec. 11 and Wed., Dec. 12. 7:30 p.m. Seventh Street and Penn Ave., Downtown. $30-75. trustarts.org

History Explorers: Art of the Everyday

Here’s one for all you filthy animals out there. The Pittsburgh Symphony Orchestra provides live musical accompaniment for a screening of Home Alone. The hit 1990 holiday comedy stars Macaulay Culkin as a young boy who defends his home from robbers after his family accidentally leaves him behind for a vacation overseas. The symphony will play composer John Williams’ score as the film is projected in high definition on a super big screen. Thu., Dec. 20. 7:30 p.m. Heinz Hall. 600 Penn Ave., Downtown. $25-105. pittsburghsymphony.org

Don’t be a cotton-headed ninny muggins and go see Elf at Heinz Hall. The Broadway musical adaptation of the hit 2003 film starring Will Ferrell tells the story of Buddy, an orphan who stows away in Santa’s bag of gifts and becomes adopted by the elves at the North Pole. When he grows up and finds out his human origins, the unflappable Buddy journeys to New York City to find his birth father and spread holiday cheer. Wed., Dec. 26 – Sun., Dec. 30. Various times. 600 Penn Ave., Downtown. $31-96. trustarts.org