Only registered voters may file complaints, and the form requires the name, address, and date of birth of the person submitting the complaint.

And for more information on your rights this Election Day, check out our Election Day FAQs.

AG Candidates: I see your ad and raise you one!

It’s been a busy and messy week for both campaigns in the race for state Attorney General.

First, on Monday, Republican David Freed and Democrat Kathleen Kane squared off in their only debate. As Allentown’s Morning Call reported, the two clashed mostly over the child-molestation probe of former Penn State assistant football coach Jerry Sandusky, conducted by Gov. Tom Corbett, and their ability to stay independent from a Republican-dominated state legislature and administration.

The rest of the week has been more dramatic, though, on account of more advertising tactics which have already sullied the campaign. On Tuesday, the Democratic side took its turn when the Committee for Justice & Fairness aired an anti-Freed television ad. The ad calls Freed a political insider and slams him for saying he wouldn’t review Corbett’s investigation of Sandusky, which isn’t exactly true, according to PoliticsPA:

“The ad cites an Associated Press report. There’s just one problem. That AP report was later corrected to reflect the fact that Freed didn’t rule out a review of the Sandusky case, and indeed said he would conduct one if, when elected, he thought it was necessary.

Kane denounced the ad, saying it wasn't from her campaign and is calling for its removal. In a Philadelphia Inquirer article, meanwhile, Freed campaign manager Tim Kelly responded: "That's great," he said. "But it doesn't change the fact that the false ad is still running.”

(Freed has previously came under fire for not denouncing an anti-Kane spot ran by the Republican State Leadership Committee which was called one of the most blatantly false attack ads of the season.)

Freed, meanwhile, launched a new television spot this week, touting himself as a “tough no-nonsense prosecutor” who has put away drug-dealers, child molesters and murderers.

The Kane campaign also aired its own ad this week, touting her experience as prosecutor. “You want somebody tough enough to tell the Harrisburg boys enough is enough? You need to send them a prosecutor, not a politician.”

For more on the race the candidates, check out our election guide here.

Among candidates highlighted by the group are:

— Kathleen Kane, the Democrat running for Attorney General. CeaseFire's executive director Max Nacheman praised Kane in a press release for agreeing to review all concealed carry reciprocity agreements in place between Pennsylvania and other states, and agreeing to renegotiate or terminate "those that do not meet Pennsylvania’s standards." Nacheman also praised Kane for supporting improvements to the state's background check system.

— David Levdansky,a Democrat from Forward whose trying to reclaim his former seat from Republican Rep. Rick Saccone in the 39th House District. "A long time sportsman and Second Amendment advocate, Levdansky is a firm supporter of the right to bear arms — but understands that preserving that right does not exclude reforms to improve the efficiency with which police and prosecutors can enforce existing laws and crack down on people who use and traffic guns illegally," CeaseFire noted in the release.

"We're most excited about Dave," Nacheman tells City Paper, noting that the former legislator backed lost and stolen handgun ordinances for municipalities, which attracted the ire of the National Rife Association "Dave is one of the most important voices in Pennsylvania when it comes to reducing gun violence," Nacheman says. "The NRA has made a point of attacking him ... he's willing to buck the order and do what's right."

A full list of CeaseFire's endorsements can be found below:

Tonight is the final presidential debate (9 p.m., all network and cable news channels), with a focus on foreign policy (or lack thereof, depending which side you're on). Below are a fresh set of four bingo cards, just brimming with exotic international buzzwords ("apology tour," "Putin," "red line").

The avuncular CBS newsman (and sometime C&W singer) Bob Schieffer moderates. This is one Texan who keeps a sharp stick tucked under his easygoing manner, so hopefully he'll keep the candidates on point and won't allow meanders off the card into education reform or Medicare donut holes.

Download one or more cards, and keep your fingers crossed for "Ahmadinejad."

Last night, journalist Howard Fineman gave a lecture at Pitt’s Alumni Hall on the timely subject of “Down to the Wire: The 2012 Presidential Election.” Fineman worked for more than 30 years at the soon-to-be-late Newsweek and is now editorial director at The Huffington Post and a political analyst for NBC and MSNBC; he has covered every presidential campaign since 1984.

Being a Pittsburgh native addressing a Pittsburgh crowd, Fineman knew to start strong — and local. He riffed about how Pittsburgh had influenced him, and how the city was representative of significant moments in U.S. history — from the tax challenge of the Whiskey Rebellion and the early capital-vs.-labor struggles to the Pittsburgh’s various renaissances. “There’s nothing wrong [today] with America that the example of Pittsburgh can’t solve.”

Fineman spoke for an hour about the 2012 presidential campaign, sounding mostly gloomy notes about the process; the parties (“no longer facilitators of [useful] argument, [but] now presenters of argument”); the news coverage (“the media is in silos”); and the outcome (“a very, very close race”). Then, he apologized for the downbeat tone, and recounted a joke Sen. Bob Dole made about Ford, Nixon, Carter and Reagan.

Former Pennsylvania governor and U.S. Attorney General Dick Thornburgh then took the stage — which caused Fineman to promptly fall off it. He recovered by telling another joke about how one-time presidential candidate Gary Bauer once fell off a stage while flipping pancakes.

Thornburgh’s job was to moderate the Q&A, choosing questions from the dozens submitted on cards from the audience. These prompted erudite digressions on the changing nature of candidate debates; the role of new media and the need for stewardship (“If news is strictly a matter of what’s popular, then cat videos will be the future of democracy”); and how young people might get started in media.

Then Thornburgh elicited gales of knowing laughter by asking: “When in Pittsburgh, Mineo’s or Aiello’s?” (Full disclosure: This was my question. I submitted it as a joke, and was surprised as anybody that such an esteemed moderator would choose it from a stack of questions that were presumably more thoughtful.)

Fineman cited his book, The Thirteen American Arguments, and added, “This is number 14.” He reminisced about walking past Mineo’s on his way to Allerdice High School; recounted what he believed to be the origins of the dispute, jokingly comparing it to Shia-Sunni conflicts; and gave an unequivocal answer: “Being a traditionalist, I still go to Mineo’s.”

So much for the liberal media? Local cable provider offers Obama 2016 for free

Just weeks before the Nov. 6 elections, a local cable provider is offering its subscribers a special promotional offer: a free look at 2016: Obama's America, a film "documentary" which purports to show that President Obama hopes to undermine the United States from within.

Armstrong Utilities, the nation's 15th-largest cable provider, operates in five states, including suburban and rural parts of western Pennsylvania. And recently, its homepage began notifying viewers of a "Free Movie Special" — an on-demand screening of the film, which was in theaters only a few weeks ago.

While much on-demand content is free, subscribers tell City Paper — and an Armstrong executive confirms — that this is the first time the cable provider has offered such a deal for a recently released feature film.

In the video, "District Attorneys for Freed," a handful of DAs pledge support for Freed. Among those making appearances are Delaware County DA Jack Whelan and Montgomery County DA Risa Vetri Ferman, who was rumored to be considering a run at the post last year.

In a release on Freed's web site, Adams is quoted saying, “The importance of this race goes beyond party lines. It’s critical that we elect an Attorney General who has the skills, the training, and the principled, proven leadership to take on the responsibility of Pennsylvania’s top cop. In this year’s race for Attorney General, supporting David Freed is a very easy decision.”

The forum, “From Movement Politics to Electoral Politics and Back: Anti-Poverty Organizer Cheri Honkala Reflects on her Green Party Vice-Presidential Candidacy” will now be held at 7 p.m. Wednesday, Room 105 of the University of Pittsburgh’s David Lawrence Hall, 3942 Forbes Ave. (next to Hillman Library), Oakland.

First up, Democrat Kathleen Kane’s campaign sent out a press release citing an Inquirer Pennsylvania Poll that says she’s up over Republican Dave Freed by 12 points.

In the release, Kane praised the results as being significant because it’s the latest poll since “Freed and his allies, the Republican State Leadership Committee (RSLC), unleashed a vicious, false attack against me; an ad that the watchdog group FactCheck.org called the ‘ one of the most blatantly false attack ads of the political season’.”

Kane was referring to this ad that claimed she was soft on rapists when she was a prosecutor in Lackawanna County. The ad was later pulled.

Meanwhile, Freed's campaign sent out an afternoon announcement that support was “surging” for the Republican this week as well, noting he picked up endorsements from the National Rifle Association , former governor Tom Ridge and the Fraternal Order of Police Lodge 1 in Pittsburgh. 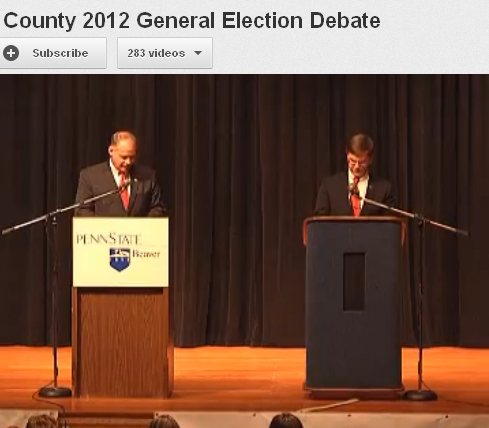 The event itself was short and sweet — about 20 to 25 minutes — but Democrat Mark Critz and Republican Keith Rothfus squared off Wednesday night to debate the issues in the D-12 U.S. Rep. race at Penn State Beaver. And thanks to the magic of the Internet, you can view the video yourself right here.

The race is very hotly contested as Republicans see the opportunity to unseat a Democrat incumbent and have spared no expense in trying to do so.

The two will meet Tuesday in an hour-long, more in-depth debate on the Pitt-Johnstown campus in the heart of Critz country.

Wednesday's debate was sponsored by the Beaver County Chamber of Commerce and also featured a pivotal state Senate race between Republican incumbent Elder Vogel and Democrat challenger Kim Villella, who we highlighted in a story last month.