Believe it or not, there is a Beer Institute, and just under the wire for the weekend, it's issued this press release: "The Beer Institute Celebrates the 78th Birthday of the Beer Can."

“'Innovation and ingenuity are the bedrock of American brewing and beer importing. Cans were found to be easy to stack, extremely durable and took less time to chill,' said Beer Institute President Joe McClain."

“'There are numerous reasons to celebrate canned beer,' said Robert Budway, President of the Can Manufacturers Institute. "

Perfect ruminating for a snowed-in kind of evening.

Somewhere between “art graffiti” and mindless tagging, there’s a certain class of graffiti that causes you to goggle, chuckle or ponder. It may be a piece of text with inscrutable meaning. An egregious misspelling. A clumsily worded threat or boast. A badly drawn cobra. 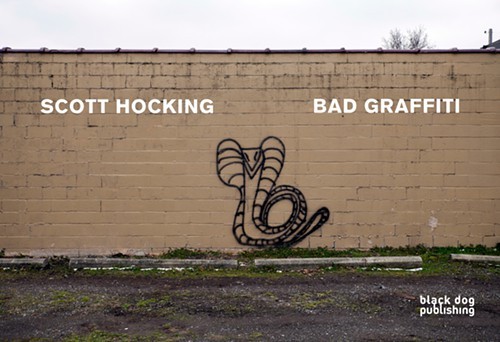 Detroit artist Scott Hocking has an eye for such pieces of the urban landscape and has photographed them in his travels around town. Now, the photos are compiled for your amusement in Bad Graffiti (Black Dog Publishing). 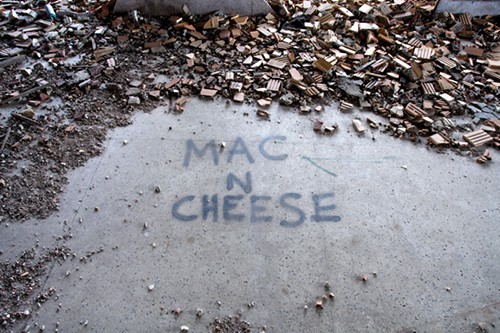 In the short introduction, Hocking writes of his fascination with such graffiti: “Deciding your tag name is going to be ‘Salad,’ and writing it in cursive is mystifyingly bad.” 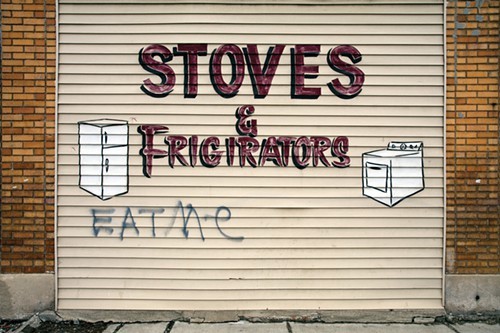 The book features more than 150 photos, with no commentary. Goggle, chuckle and ponder. 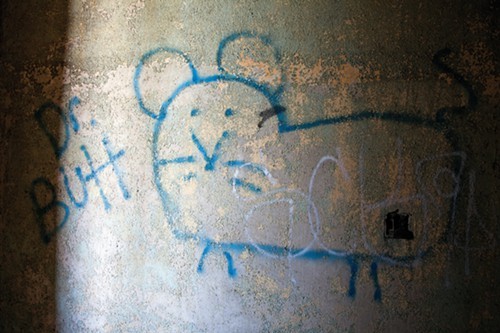 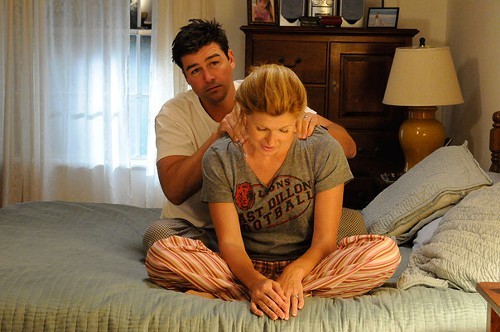 I don’t care for football, and I especially don’t like the hoopla that surrounds it. I’d never ever ever watch a TV show about a Texas high school football team. But I was wrong. I just power-watched all five seasons of NBC’s Friday Night Lights (loosely inspired by the eponymous Buzz Bissinger book), and I’m in tears because it’s over.
It’s too bad folks assume this is a sports show, because it’s really a smart, funny, bittersweet look at life in a kinda lame town — and how folks deal with that. Yeah, there’s occasional made-for-TV moments (and the less said about Season 2, the better), but winning performances, just the right amount of heart and a focus on everyday people’s everyday problems make this show great.
There’s football in it, but it’s not about football.
Available on DVD 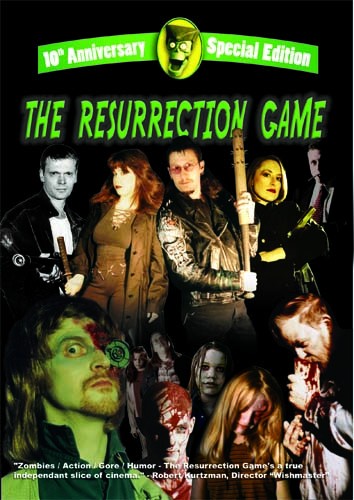 This week my colleague Al Hoff reports on a book that is the alleged authority on zombie films.

To put that claim to the test, I grabbed her copy of Zombie Movies: The Ultimate Guide (Chicago Review Press, $24.95), flipped to the index and searched for The Resurrection Game. Sure enough, there is was on page 359 under the heading “Rare, Obscure and Less Important Titles.”

I was overjoyed to see this film included in this book — although just by title — but a little bit offended by the “less important” part of the headline. And I don’t just say this because I made my motion picture debut in this film.

Everyone knows Pittsburgh’s important place in zombie movie history. But in 2000, there weren’t any zombie movies coming out of this city and the zombie apocalypse craze that we know now was still several years off. I was a writer at the former In Pittsburgh News Weekly when I got a call from the film’s director Mike Watt.

Basically the film’s plot involved a world infested by zombies but the undead were more of an annoyance that were dealt with by calling an exterminator like you would for rats or cockroaches. Except a new breed of zombies were being created by a shadowy company and the world’s domination by the zombie race was going to be inevitable.

Watt was making the movie on a shoestring with his wife, Amy Lynn Best and good friend, special effects wizard and fellow Pittsburgh Filmmakers’ alum Bill Homan. Watt invited me out for a day of shooting in a huge space above the American Buyers Discount Mattress store in Homestead.

Homan put me in makeup and I hung out all day talking with the actors and the group from Watt’s production company Happy Cloud Pictures. I found they were a great bunch of folks who really cared about the film they were making even if it would eventually be labeled as allegedly “less important.” For all we know this film may have helped re-energize the zombie genre. At least that's what I like to think.

You can still buy the film along with all of the films Watt has done since Resurrection Game by visiting Happy Cloud’s website.

If you buy the movie, look for me in one of the movie’s final scenes — I’ll be the big zombie in the green plaid shirt eating a security guard.

No Trick-or-Treat tonight, make your own Candy Corn

Since most Halloween celebrations have been postponed due to bad weather, why not spend tonight converting sugar into candy corn?

The best recipe I've found is one from Alton Brown, Food Network's resident mad scientist. The process is a bit time-consuming but fun, and the end product is worth the time for true candy-corn lovers. Here’s the recipe I use with tips from my own experience to make the process a bit easier. Set aside a couple hours, especially if you’re doing it with kids.

Animal Rescue League needs to be "Liked" in a big way

The shelter, located in East Liberty, is an "Open Door" facility which means it accepts all animals that need to be sheltered. The competition is the Rachel Ray ASPCA $100k Challenge and ARL is currently in the lead for the contest's Community Engagement Award which is decided by the number of votes an agency receives on Facebook. The winner will receive $25,000

Currently ARL is in the number one spot and voting expires at Midnight tonight. They have fewer than 1,000 votes more than the Humane Society of Central Washington in Yakima, Wa. And since Washington is three hours behind Pittsburgh you can vote now while they're still sleeping. You can cast your vote on the contest's Facebook page.

And just to play on your sympathies to make you go vote, here's a picture of "Chuck," a little Chow Chow ready for adoption at the ARL. Chuck wants a new home and the $25K:

Long-time local professional wrestler Ken Jugan, aka Lord Zoltan, has been given the 2013 “Jason Sanderson Humanitarian Award” by the nationally-known Cauliflower Alley Club.

The CAC was established in 1965 as a benevolent, non-profit fraternal organization made up of both current and former professional wrestlers. The group offers scholarships, administers a benevolent fund for former wrestlers who have fallen on hard times and honors its members and industries with annual awards.

Jugan has been a fixture in pro wrestling for more than three decades. He got his wrestling start by shooting news photos of the matches in the 1980s, right before pro wrestling became a pop-culture phenomenon.

In a profile City Paper did of Jugan in 2009 he said, "I started messing around in the ring and the promoters started inviting me back." Jugan never made it big, but he did square off against the likes of Andre the Giant and the Iron Sheik. (In fact, on YouTube you can still can watch him face off against the Iron Sheik in a February 1984 match.)

The award Jugan will receive, according to the CAC website, “will recognize a CAC member in good standing who, through his or her efforts or resources, has endeavored to improve their community and the lives of others, thus elevating the perception of the professional wrestling industry and its participants.”

Jugan fits into all the above categories. Jugan wrestles almost weekly under the name “Lord Zoltan” for area promotions including the Keystone State Wrestling Alliance. http://www.kswa.net/In addition, Jugan has for years run an event to benefit the Western Pennsylvania School of the Deaf called “Deaf Wrestlefest.” Jugan’s two sons attended the school and he runs the event as its main fund-raiser.

Jugan will receive the award at the CAC’s annual reunion held April 15-17 in Las Vegas. 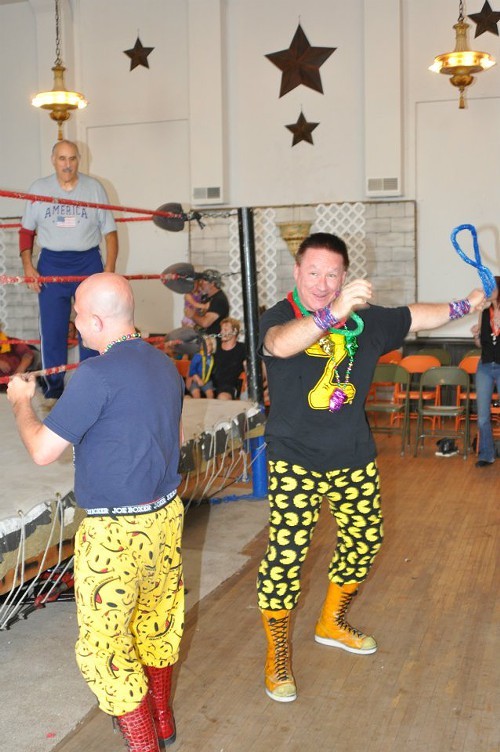 The roller coaster that is the 2012 Pittsburgh Pirates season went completely off the rails this weekend when the team sealed its fate for a 20th consecutive losing season when they lost to the Cincinnati Reds 4-3 on Sunday.

So what if the team blew a division lead. So what if they were 16 games over .500 at one point in the season. So what if Clint Barmes and his .226 batting average is coming back next season for the second year of his $10.5 million contract.

There are still three more games to be played and thanks to the laws of supply and demand you can see those last three games at a huge discount. Tickets this afternoon on Stub Hub, a ticket re-sale sight, were as low as 48 cents for the Pirates season finale Wednesday afternoon against the Atlanta Braves at PNC Park. If you're a baseball fan, it will be your last chance to see Atlanta Legend Chipper Jones live and in person before he retires at the season's end.

If you think 48 cents is still too much to pay for the Pirates, you can go out and see the team tonight because tickets for that game are a real steal at 15 cents. 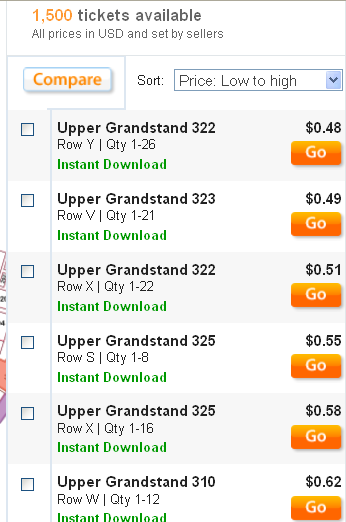 I’m a couple months late in raving about Gillian Flynn’s twisty new thriller Gone Girl, but I had to wait for my library copy to arrive. This was the most perfect piece of summer reading — mystery + dysfunctional relationship + mean-funny — that I am now recommending for fall.

In it, two thirtysomething married bohos tumble from their Brooklyn idyll to a small town in Missouri. (They are partially undone by the crappy economy: Nick gets canned from his magazine job, and Amy has been living off the fumes of her parents’ children’s book series based on her.) The tale opens on a seemingly ordinary day — in which Amy simply disappears.

Flynn, a former TV critic for Entertainment Weekly who has likely learned a thing or two about the effective pacing and cutting of a narrative, unfolds the story in two parts: One is told from Nick’s perspective, as the ongoing mystery of what happened to Amy, and how Nick becomes a suspect in her disappearance; the other is Amy’s diary, beginning some five years ago with the couple’s meeting.

Call it sweet and sour, as Amy’s chirpy entries collide with Nick’s fraught, and increasingly anger-filled, nightmare. The two tales don’t jibe, but then we haven’t a clue which party — if any — is a reliable narrator. Suffice to say, as much as these two streams reveal about Amy, Nick and their dinged-up relationship, there are even more jaw-dropping revelations ahead. Not to mention some entertaining critiques of cable-TV-crime-as-entertainment complex, people who think they’re smarter than you, and how gullible we can be when presented with “facts.”

Flynn’s smartly written thriller had me back at the library, requesting her two earlier thrillers — Sharp Objects, a Grand Guignol of a mother-daughter-sister tale, and Dark Places, which I’m still waiting for with happy anticipation.

What's in a name?

I have a story this week on Fredrick's, a new soul food restaurant that recently opened up on Smithfield Street, Downtown.

I've had lunch there a couple times since it opened and I went to meet the owner one morning last week. He let me in the store and immediately introduced himself as Larry Ross. Which led me to the next obvious question, "Who's Fredrick?"

Ross tells me that Fredrick is a nickname that his mother used to call him when he was a kid.

"She grew up with this kid named Fredrick and he used to driver her crazy," Ross said with a chuckle. "So whenever I'd act a fool or get on her nerves she'd call me 'Fredrick Goosby' and tell me to knock it off."

The nickname stuck and since Fredrick's is a family business — mom actually works with Larry, helping him cook up soul food delicacies like wings, waffles and catfish nuggets — there's a chance you might get to hear a frustrated "Fredrick!" coming from the kitchen on your next visit.