💔💔😭😭 I Hope It’s Not An End Of An Era #TeamFindJujusBike pic.twitter.com/inFJ1fhsbC

The Pittsburgh Steelers' new star wide receiver, JuJu Smith-Schuster, is known for catching touchdowns and coming up with innovative celebrations, including a hide-and-seek number during the Steelers' win over the Bengals on Oct. 22. But Smith-Schuster is also known as the team's best bike commuter, as he often rides his bike to practice at the Steelers' training facility in the South Side. And in a town where city councilors might scream at you for riding your bike, that's an impressive feat.

However, Smith-Schuster tweeted today, Oct. 24, that his bike has been stolen. "I hope it's not an end of an era #TeamFindJujusBike," wrote Smith-Schuster on Twitter.

Hundreds filled up the courtyard of the Allegheny County Courthouse to cheer on the Pittsburgh Steelers on the eve of the team's playoff game with the Cincinnati Bengals, on what some were dubbing "Steelers Friday." Terrible Towels were waved, Steely McBeam posed for selfies and the crowd sang along to everyone's favorite football tune, "Here We Go."

Elected officials were on hand, including Pittsburgh Mayor Bill Peduto and Allegheny County Executive Rich Fitzgerald, and they all rallied the crowd and, of course, threw out free Steelers swag. (Former Steelers defensive lineman Chris Hoke also pumped up the crowd.) Peduto said that even though no playoff games were going to be played at Heinz Field, the "path to the Super Bowl still has to go through us."

City Paper was there to take in the action. For more of our earlier Steelers coverage, click here.

League of Denial strings together deaths of former Steelers, puts NFL in the hot seat

The long-awaited Frontline feature documentary League of Denial: The NFL's Concussion Crisis aired last night, putting Pittsburgh in the spotlight for both good and bad reasons.

The documentary was a joint project of PBS and Steve Fainaru and Mark Fainaru-Wada, who wrote the accompanying book and have reported on the NFL concussion crisis in the past. The Fainaru brothers have reported in the past for ESPN, which, until August, was a co-producer of League of Denial. In August, ESPN abruptly ended its participation in the project, allegedly because of pressure from the NFL.

If the NFL was worried about League of Denial making it look bad as an organization, the worry was warranted. While plenty has been reported in recent years on concussions, chronic traumatic encephalopathy and football, the Frontline doc laid out a comprehensive history of the matter, highlighting the work of Dr. Bennet Omaru, formerly of the Allegheny County Medical Examiner's office, and Dr. Ann McKee, of Boston University's Center for the Study of Traumatic Encephalopathy.

Pittsburgh plays a starring role — for better and worse — in the documentary.

After a week one loss to the Broncos, the Steelers evened out their record to 1-1 with a 27-10 win over the New York Jets. It's on to Oakland for a week 3 scrum against the Raiders but not before we break down Mike Tomlin's weekly press conference.

Although Tomlin talked about the need to "Thud Up" the injured Rashard Mendenhall in practice to get him ready for Sundays and said evaluating replacement refs was "not in my wheelhouse," Your Tomlinism of the week is:

"We need to tighten up our menu and lean on the things we are doing well. " 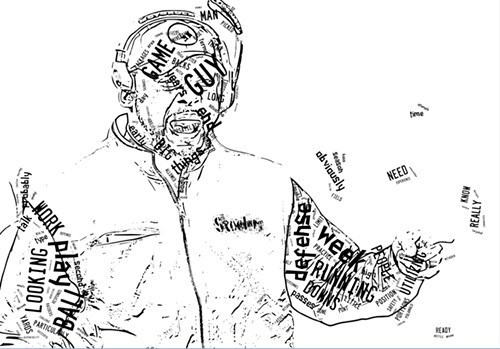 After a heartbreaking 31-19 loss to the Denver Broncos in Sunday's season opener, the Pittsburgh Steelers look toward the New York Jets this week. And with every new Steelers game, comes a new Mike Tomlin Press Conference.

Quote of the Week: "Obviously, we are not looking for positives, that’s not our bag." 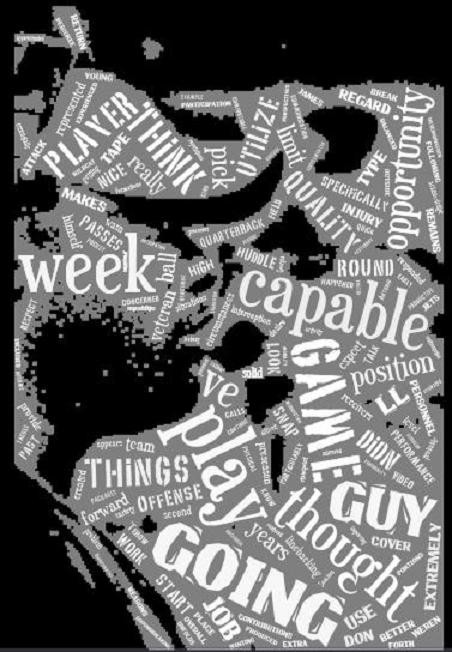 Mike Tomlin is a man of few words — especially when it comes to answering direct questions about his football team. He chooses his words carefully, so rather than trying to figure out what his words mean, it might be best to take a look at what words he uses and with what frequency. Here's a tag cloud from Tomlin's weekly press conference leading up to Sunday night's clash with the Denver Broncos.