The touring Found Footage Festival, hitting town on Tue., June 24, is happening at Regent Square Theater, not at Melwood, as listed in the print edition. The updated preview follows:

FOUND FOOTAGE FESTIVAL. The curators of odd and funny found videos return for an evening of laughs, as Nick Prueher and Joe Pickett show off their latest finds, gleaned from thrift stores and garages sales. This is the 10th anniversary of the Found Footage Festival, and screens as part of the Brooklyn Brewery MASH festival. Among the highlights in the 2014 reel are: an exercise tape called “Butt Camp,” obnoxious shopping-channel hosts and the recent “Chef Keith” prank.
8 p.m. Tue., June 24. Regent Square. $12

This weekend, the Hollywood Theater in Dormont celebrates its third year operating as a rep house and independent movie theater. (The building has been a cinema since the 1920s.)

It's a cause for celebration on Sat., May 3 — plus do a little fund-raising. To stay viable, the theater needs to purchase a new digital projector.

But for your ticket price ($25 in advance or at showclix.com; $20 for members; $30 at the door), you get a full evening's entertainment:

And, of course, movies. On the slate is a double feature celebrating Pittsburgh. First, Undaunted: The Forgotten Giants of Allegheny Observatory, an hour-long documentary about the influential North Side observatory. That's followed by The Fish That Saved Pittsburgh, a 1979 comedy about a hopeless basketball team starring Jonathon Winters, Julius Irving and Meadowlark Lemon.

Fish also kicks off the Hollywood's new series of curated films, and was chosen by Pittsburgh Mayor Bill Peduto, who is expected to attend. 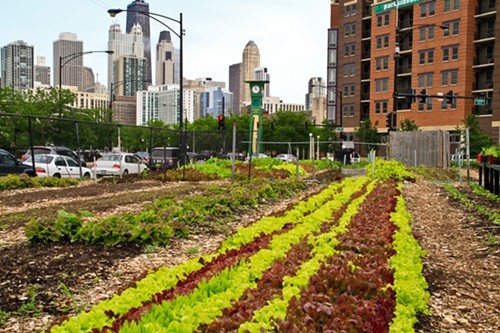 Urban farming is among the hot topics of the 21st century, tapping everything from remediating blight and building communities, to providing fresh produce to increasing food security. For their new documentary, Growing Cities, filmmakers David Susman and Andrew Monbouquette hit the road to discover how farming sprung up in America's cities, and what benefits this new urban agriculture might have on people and places.

The film, presented by Penn State Center Pittsburgh, screens at 6:30 p.m. (doors at 6 p.m.), at CLASS in Regent Square (1400 S. Braddock Ave., near 376 on-ramp). The screening will be followed by a discussion with filmmaker David Susman and a panel of local farmers. Admission is free, but a RSVP is requested at cjh47@psu.edu.

Learn more about the film here.

Every great artist starts somewhere, and the next successful filmmaker may be screening his or her work this weekend at the annual "Shot for Shot" film festival, held by the Carnegie Mellon Filmmaking Club.
Eleven local short films will be screened, comprising both student films and films produced independently by students outside of the classroom.
The films will be presented at 7:30 p.m. Sat., April 12, at McConomy Auditorium, on CMU's campus. Judges will award three prizes, and the audience will also pick a favorite. The event is free and open to the public.

The film — The Venice Syndrome — moved to new venue

Tonight, the Italian Film Festival is presenting the recent docu-essay, The Venice Syndrome, which examines how the historically and culturally significant Italian city is being overrun with tourists.
Ironically perhaps, the original screening venue has been changed in order to accommodate more viewers. Previously set for Posvar Hall, the film will now play at Pitt's Alumni Hall Auditorium (seventh floor), at 4227 Fifth Ave., Oakland. The film begins at 9 p.m., and admission is free.

The Game Changers Project is a national fellowship for emerging black filmmakers to create short films about black men who are "game changers" in their communities. This weekend provides two opportunities to see some Game Changers films, as well as meet up with participants and take part in discussions.

The Game Changers Film Forum takes places Fri., March 21, at the Alloy Studios, in Friendship (5530 Penn Ave.). There will be a screening of "Indivisible Man," a collection of short documentary films including those made by Pittsburghers; a panel discussion; a youth media workshop with OneHood Media Academy; and a reception with Game Changers filmmakers. The workshop is at 5 p.m.; screening 6 p.m., and the reception is 8:30 p.m. The event is free, and registration is encouraged here.

The dead of winter is a good time to fire up the creative juices. And for filmmakers and aspiring filmmakers, there's two things of interest this week.

The Steeltown Entertainment Project's Film Factory is still accepting entries for its short script competition. Finalists receive mentorship, and the eventual winner gets up to $30,000 to produce a short film in Western Pennsylvania. The winning short also premieres at the Three Rivers Film Festival.

New this year, all entrants will be assigned three other scripts to read on which they can provide feedback, which will be considered in the judging process.

Dust off your ideas and typewriters — scripts (no longer than 12 pages) are due by Fri., Jan. 31. See the Steeltown Entertainment site for complete details.

And, if you've already shot your film or video, Pittsburgh Filmmakers is looking to screen it this Friday. The slate is open to students and alumni of Filmmakers, as well as PF/PCA members. Artists can submit one film (up to 15 minutes), in the following formats: .mov, DVD, Blu-Ray. If submitting a film on 16 mm Super 8 or MiniDV, email Zavala@pghfilmmakers.org by Wed., Jan. 29.

If you haven't had a chance to see Steve Hoover's documentary Blood Brother at various screenings around town, here's your chance to catch it on TV. The award-winning film — it won the Grand Jury Prize and Audience Award for Documentary at Sundance a year ago — screens as part of PBS's Independent Lens series tonight at 10 p.m.

The locally produced film follows Pittsburgh Rocky Braat, as he relocates to India and finds his life's work at an orphanage, caring for children with HIV/AIDS.

A DVD of the film is scheduled to be released on Feb. 14.

Have you or someone you know made a short film with Jewish themes in the last three years? If not, can you make one in the next few days?

Pittsburgh's JFilm, which organizes the long-running Pittsburgh Jewish and Israeli Film festival among other events, is looking for entries for its Robinson International Short Film Competition. First prize is $10,000, with two smaller prizes of $3,000 each.

Prizes are awarded at the Gala Awards program, in Pittsburgh, on May 7, 2014.

The Coen brothers new film about the early 1960s folk-music scene in New York City — Inside Llewyn Davis — doesn't open in Pittsburgh until Fri., Dec. 20. But you can catch a free sneak peek of it tonight at Regent Square Theater. The film which stars Oscar Davis, Carey Mulligan, John Goodman and Justin Timberlake has been well reviewed, including — spoiler alert — in the City Paper due out tomorrow.