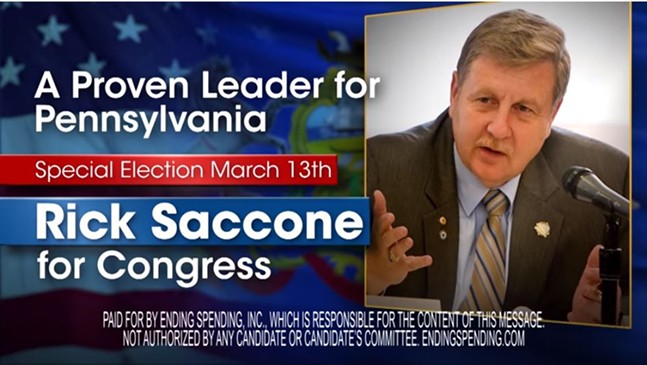 Daryl Metcalfe
Pennsylvania state representative Daryl Metcalfe (R-Cranberry) has been known to take on many controversial topics. He regular shouts criticisms of “anchor babies,” gay tourists, and people who warn of the dangers of climate change. Serving as a state representative since 1999, Metcalfe has been spouting far-right views since before Breitbart existed. In fact, Metcalfe once claimed in the Pittsburgh Post-Gazette that he “was a Tea Partier before it was cool."

Labor Keeping Up With the Council 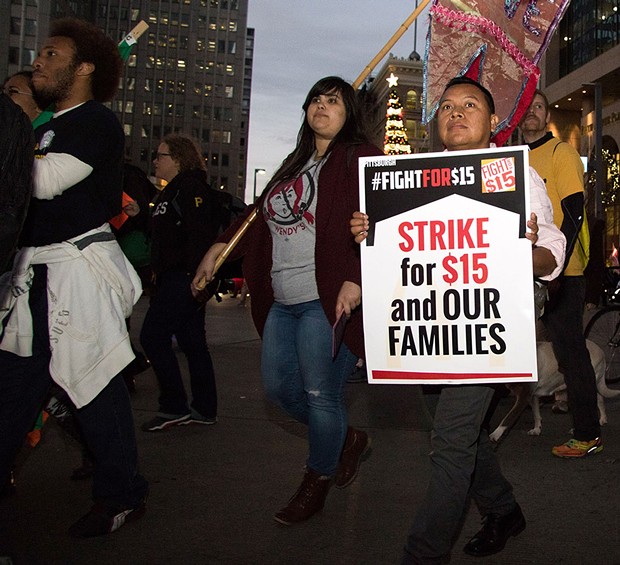 CP photo by Luke Thor Travis
Last November workers took to Downtown streets to fight for $15/hr
For the past several years Pittsburgh and other municipalities around the state have seen a number of rallies, marches, protests and strikes calling for an increase in the minimum wage. The Pennsylvania minimum wage was last raised in 2009, but at $7.25, it’s half the amount activists want.

State Rep. Patty Kim (D-Dauphin County) has spent the past four years trying to change that. In 2013, she first introduced legislation to raise the state’s minimum wage without success. Last month she proposed it again. The legislation would increase Pennsylvania’s hourly wage from $7.25 to $12 in 2018, and then increase it each year until it reaches $15 in 2024.

City Government Labor Keeping Up With the Council

Earlier this week members of the city's Wage Review Committee met with members of Pittsburgh City Council to discuss findings in a report they released in December. The report was the result of two days of testimony from 130 hospital and service workers along with healthcare experts and economists.

Marla Blunt testifies before city council
"Many hospital workers work so many extra hours weekly to try to make ends meet to support their families. After receiving their paychecks, many workers qualify for public assistance," said Marla Blunt, a food service worker and member of SEIU 32BJ who serves on the committee. "Service workers have to stand in line for hours at a time at food pantries and food banks to feed their families. They are forced with decisions of feeding their children or their lights or gas being turned off. What a choice to have to make."

Among the Wage Review Committee's recommendations is that council endorse the demand of hospital workers to be paid at least $15 per hour. It also recommends that council "actively support workers' right to form a union without interference or intimidation from hospital management," and "incentivize hospital employers to improve pay and working conditions for hospital service workers, through the exercise of its authority in the areas of budgeting, contracting, zoning and building codes, public health and safety."

"I look forward to digesting these recommendations. What I heard today though was really confirmation of already existing suspicion," said Council President Bruce Kraus. "My question is this, where do we go from here. There has to be a concrete plan of action we can take."

"We had a lawsuit against UPMC as the city, and I don't know what's happened. I understand from the papers that the mayor has dropped that lawsuit, and I think that was really a strength that we had," said Councilor Darlene Harris. "So what could we do? We could follow through with the lawsuit we started with."

"There are some scholars of nonprofit law, myself among them, that would say that any charity that bonuses its executives out of excess revenues has conferred a private benefit," Cafardi said of the high wages earned by top UPMC executives. "One major healthcare organization in Pittsburgh has a long history of bonusing its top executives. "

The question of UPMC's nonprofit status has been raised frequently over the years. And taking away UPMC's tax-exempt status has been threatened as a form of leverage to improve working conditions for their employees to no avail.

"Folks working a full work week at a public charity should not be on food stamps or medical assistance, at least not while the top executives use their power over the organization to walk out the door every year with millions," said Cafardi. "Now of course those executives work hard and deserve a market rate wage but not at the cost of depriving those at the bottom of the pyramid of a living wage. That is a private profit, and I believe that it it disqualifies such an organization from tax exemption in Pennsylvania."

Duquesne adjuncts vote for union, still won't get one any time soon

The United Steelworkers announced this afternoon that pro-union adjunct instructors at Duquesne University, have won a referendum on forming one. Out of 88 adjuncts in the McAnulty College and Graduate School of Liberal Arts, 59 cast a ballot -- and all but 9 of those were in favor.

But Duquesne will continue to fight against the union anyway, because of Jesus.

More than half of the adjuncts had previously signed union cards. But the school has recently taken to arguing that labor laws didn't apply to it because of centuries-old, deeply cherished beliefs that it had forgotten about until just a couple months ago. The school claims that labor law intrudes on its religious freedoms, including the freedom to assert control over its faculty without union interference. Today's vote does nothing to resolve the religious-freedom question, though the National Labor Relations Board will now be obliged to respond to the school's claim.

The Steelworkers celebrated the win, but expressed frustration with the school. "We're disappointed that [Duquesne administrators have] already announced their intentions to shirk their legal and moral obligations," said Steelworkers attorney Dan Kovalik in a statement.