Check out our runway highlights from summer photo intern Krista Johnson below.

Photo courtesy of Electric Lime Studios
Polka-dot lovers unite! Have you heard? Women in Pittsburgh are singing swoony praises right now because the ModCloth IRL ("in real life") pop-up shop has made its way to Pittsburgh, ModCloth’s birthplace. Located at 625 Smithfield St. Downtown, this is the last stop on the Modcloth’s IRL tour. The IRL pop-ups have visited cities such as Austin, Denver and Portland.

Photo courtesy of Electric Lime Studios
At this pop-up shop,  you have the chance to feel, inspect and try on some of ModCloth’s signature quirky attire in an array of sizes from XS to 4X. The store has on-site ModStylists to help you achieve that retro look, pair together coordinating pieces for your body type, and even to take your measurements. The best part is: free shipping to your door within 1-2 days.

Photo courtesy of Electric Lime Studios
The shop also offers in-stock merchandise you can take home with you including a one-of-a-kind custom Pittsburgh graphic tee only available at the store. The shop also features products from local Pittsburgh brands such as No Sleep Boutique, Moon Pine, Steel City tees and more. Certain days will even feature in-store musical performances and temporary tattoo stations. 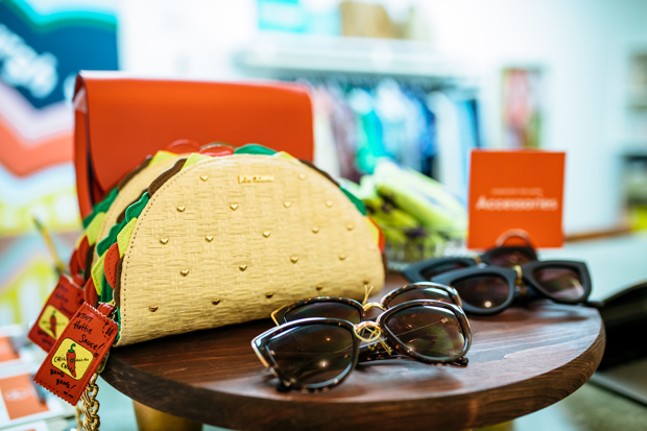 Head on down soon because the pop-up shop closes on Tue.,  Sept. 27. It is worth the visit, if for nothing else than to buy a taco-shaped clutch and a gold "yinz" necklace.

CP photo by Rebecca Addison
Chancelor Humphrey
"Keep Pittsburgh Shitty." Most of us have seen the slogan plastered on T-shirts and bumper stickers. It's a local movement meant to rebuke the influx of tech companies and gentrification in Pittsburgh. But two years ago, another slogan rose to fame: "Keep Pittsburgh Dope." The street-style Instagram account of the same name is the brainchild of Chancelor Humphrey, a 28-year-old from Aliquippa who now lives on the North Side.

Last week Pittsburgh City Paper announced we were bringing more fashion and style coverage to our print pages and online pixels. But it wouldn't feel right to to start without first acknowledging someone who has been bringing local style to the forefront.

We’re late to the street-style game and we’re even late in openly acknowledging the work of @KeepPittsburghDope photographer Humphrey and how his street-style snaps are putting Pittsburgh on the map. But we have to start somewhere and what better way than by interviewing the eye behind Keep Pittsburgh Dope himself.

How did you get started in street-style photography?

I've been doing photography for four years now — self-taught. Before I had @keeppittsburghdope, I ran a lifestyle website. I shot a little for the website. I was spending a lot of time in New York, and I saw all these street-style photographers and it was really inspiring. I also had a day job here in the city, and I was commuting from Beaver County. I started doing the street style, and I was just like: Man I need to be in the city. I need to capture the street style everyday like I want to. And two years later, here we are.

What do you think makes Pittsburgh street style unique? What do you look for when you're shooting?

We're known for blue-collar, hard work, and I think that really comes through in the street style here. There's definitely an attitude with our style.

There's this rapper Joey Badass and he has this line that goes, 'If it doesn't hit your spirit, don't get near it.' And that's how it is for me when I take a photo on the street. In terms of style, I guess I'm biased toward vintage looks.

What do you think of the fashion and style scene in Pittsburgh?

How would you describe your personal style? What local shops do you recommend?

I like to thrift. I like dirty Chucks and wearing them into the ground. Fall's really when I get to have fun and layer up — buy blazers at the thrift and have them tailored. I like Highway Robbery on the South Side, it's a vintage spot. Shop FourOneTwo, I love their stuff. FarESH, they make the Pixburgh hats. They make that awesome Pittsburgh ware.

Beyond @KeepPittsburghDope, what else are you working on?

I run Creatives Drink with my partner Cody Baker. It's an event where creatives can come and drink for free — have fun and network.We just collaborated with War Streets Brewery on our own beer — a red ale called Creatives Ale. And we're going to continue to do that — collaborate with local breweries. We're trying to throw more events. I've also started coming out with limited-edition merch. I'm collaborating with Public Print House on the clothing that I do and we have some dope stuff coming in the fall.