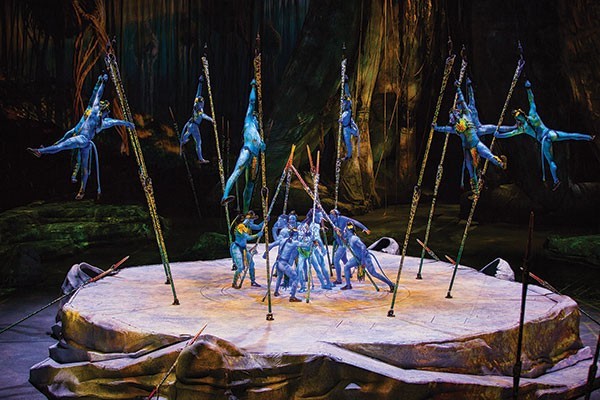 
Making its Pittsburgh premiere at Consol Energy Center, Toruk focuses on two young warriors among the Na’vi, the blue humanoids famous from the film, who are tasked with collecting five talismans in an attempt to attract Toruk, a giant menacing bird, to save the sacred Tree of Souls from destruction. The plot seems lifted from a hundred platformer video games but gives ample opportunity for the heroes and the clans they encounter to perform feats of acrobatic strength, particularly on ropes and vines.

Like the film, Toruk is visually stunning, the set transforming again and again through the use of projections, plant life emerging and disappearing through the floor, and elaborate alien puppets. However, also like Avatar, one couldn’t help but notice some serious clichés: the coming-of-age ceremony; the beating of a huge drum as the Na’vi play; the powerfully intoning shaman (played with intensity by Priscillia Le Foll); a pseudo-pantheistic religion; and a soundtrack seemingly lifted from Survivor.

If this were about a native culture in the real world, Toruk would come off as disturbingly exploitative. But set this story on a different planet with blue people and voila! — no cultural appropriation.

Plotting and thematic issues aside, the acrobatics shine, and Giulia Piolanti, who plays Na’vi princess Tsyal, makes the aerial silks look effortless. All in all, Avatar may have been a no-brainer for Cirque du Soleil on paper, but after Toruk, a back-to-basics approach might not be so bad.