Zoran Orlic
Wilco
Last year around this time i fell in love with Canadian alt-country artist Doug Paisley, and I sort of forgot about him until yesterday when i came across my copy of Strong Feelings. So imagine my delight at hearing he'll appear at the Pittsburgh Winery on Nov. 8. He'll be joined by folk singer Joan Shelley ($10-12, on sale now).

And speaking of Stage AE, on Nov. 5, that venue, along with Low Income Home Energy Assistance Program (LIHEAP), hosts a concert by the The Stickers. The show is free, but a $10 donation at the door will go towards Veterans Leadership Program.

Annabel Mehran
Joanna Newsom
Later this month, Joanna Newsom will release her new record Divers, and whats even more exciting (if you're into that kind of thing) is that on Dec. 12, she'll bring her tour to the Carnegie of Homestead Music Hall ($29-49, on sale Friday). If I'm not mistaken, this will be the singer-songwriter-harpist-etc's  first appearance in Pittsburgh since her 2006 show at the Warhol.

In slightly odder news, Creed Bratton — who you may know from The Office, where he also went by "Creed" —will present a night of music and comedy at the Hard Rock Cafe on Nov. 14 ($15-250, on sale Friday). Bratton was actually a musician before he was an actor (in the 1960s he was a member of the band The Grass Roots), so its actually not quite as strange as it sounds.

And a few more things:

And Holly Bowling plays the music of Phish at the Pittsburgh Winery on Nov. 12 ($15, on sale now).

Hey, yo, real quick: here are some newly announced SHOWS. Check 'em out below.

Curses plays the Smiling Moose on November 1 ($10, on sale now).

Lincoln Durham will be at the Hard Rock Cafe on October 7, and Peter Pan Speedrock appears there on October 14 ($12-14, on sale now).

Below are a few recently announced shows coming to various venues near you ... and if you're into that kind of thing, check out our annual Fall Arts Guide — which comes out tomorrow — for an overview of the season's coming concerts.

In the In Case You Missed That Last Tour category: Todd Rundgren plays the Carnegie of Homestead Music Hall on December 7 (he sold out Stage AE last time around, so don't wait around for tickets. They'll run $35-65, and go on sale Friday). Also, Screaming Females returns with Potty Mouth: they'll be playing the Smiling Moose on November 2 ($13-15, on sale Friday). 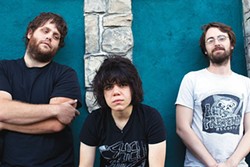 Falling In Reverse, Attila, Metro Station and Assuming We Survive bring the Supervillains Tour to Stage AE on December 4 ($23-25, on sale Friday) and, looking into next year, Vance Joy and Blind Pilot play Stage AE on March 23 ($27.50-30, on sale Friday).

If you're confused as to why all your Facebook friends are RSVP-ing to David Duchovny at the Altar Bar, it's because the actor is officially a musician - he had to do something with his free time after his split from Tea. His debut record came out in May, and he'll be in town on September 13 ($25-100, on sale now).

Norah Jones brings her soothing sounds to the Carnegie Music Hall of Oakland on October 21 ($50-70, on sale September 9).

What concert announcement do I, personally, find most interesting today? It might be neo-soul group, The Internet, which features Syd the Kyd of Odd Future. That's happening at Mr. Small's Theatre on September 15 ($18-20, on sale now). Also rather compelling: The Flamin' Groovies will be at the Hard Rock Cafe on November 15 ($14-16, on sale Saturday).

But if those don't catch your attention, here are a few more:

TesseracT is joined by the Contortionist, Erra and Skyharmor at Mr. Small's on November 7 ($16-18, on sale Friday).

British band Until The Ribbon Breaks will be at Cattivo on September 10 ($8-10, on sale now).

And lastly, Strange Wilds and Spray Paint take the stage at Spirit on October 13 ($8-10, on sale now).

Just a smattering of concert announcements today, so lets just get right to it.

Mac Miller will be with Choo Jackson and The Come-Up at Stage AE on September 20 ($29.50-35, on sale now ). It might be one of the last outdoor shows of the season, which could be reason enough to go.

We're hitting that late-summer concert lull, folks, so here are some newly announced concerts to keep you thinking about live music. Because live music would never forget about you.

Cattivo is fast becoming the venue of choice for aging hardcore dudes: Madball stops by on September 30 ($12-15, on sale Saturday).

The Bellfuries and Jessica Lee Wilkes will be at The Pittsburgh Winery on September 28 ($14, on sale Saturday).

Ready for some fresh concert announcements? Here's a tiny batch for ya ...

Josh Ritter and the Royal City Band will be at Mr. Small's Theatre on October 25 ($25, on sale Friday)

You may have already heard that Sufjan Stevens is coming to Heinz Hall on November 3 ($34.50-49.50, on sale Friday), and the Zombies will be playing Odessey & Oracle live at Carnegie of Homestead Music Hall on October 14 ($40-250, on sale now), but here are a few more tours that are coming through town.

Steve Hackett of Genesis plays the Carnegie of Homestead Music Hall on December 5 ($45-85, on sale now).

Agnostic Front plays Cattivo with Freedom, Killer of Sheep and Weapons of Choice on September 6 ($12-14, on sale now).