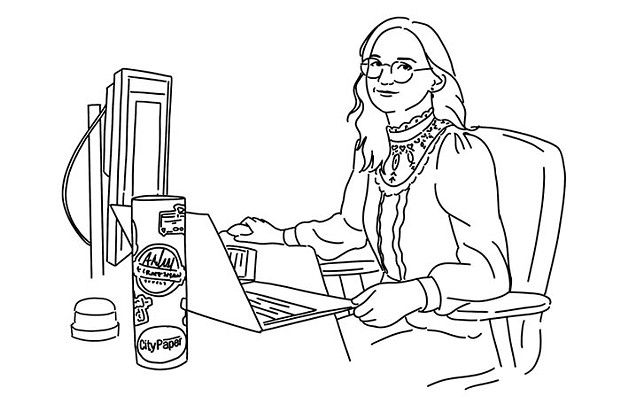 Getting the words out on CP’s socials (with speed, accuracy, and a side of punchy sarcasm) has been Kinney-Kobre’s main mission since joining the team in 2022. However, she’s had all kinds of opportunities at City Paper and her role has expanded since her start – she’s a self-described “jack-of-all trades."

One of her biggest accomplishments has been revamping City Paper’s newsletter, turning it into a daily email digest named after the paper’s mascot: City Pigeon. She’s broken election results, written film reviews, run contests, and even got the chance to write a feature for this year’s fall guide.

“It’s good to work somewhere that is so connected to the city,” she says. “I feel like I know everything that’s happened in Pittsburgh this past year!”

A North Carolina native, Kinney-Kobre was raised by two “hippie-ish” parents who were around for the heyday of alt-weekly popularity. “I’ve been exposed to this type of stuff since I was a kid,” Kinney-Kobre says, acknowledging that her “cultural references are over the place.”

One example of this is her taste in books and movies. “I watch a lot of movies… anything really, but lately it’s been screwball comedies,” she says. “I collapse my hobbies into every aspect of my life.”

At Boston University, Kinney-Kobre majored in English and Film Studies before finding her way to the ‘Burgh for a different job. One click on LinkedIn and she rerouted to City Paper, where she’s been click, click, clicking ever since.

When not at work, she finds herself on the hunt for vintage clothing scores, reading or watching movies, or being terrorized by her pet cat.

Kinney-Kobre says the collaborative work environment and unique character of the Paper suits her.

“There are stories in here that other papers aren’t telling, like under-the-radar arts stuff, social justice issues,” Kinney-Kobre says. “I grew up reading alt weeklies… and there’s something even now that is just cool about being an alt-weekly. It’s not a paper of record; it has a personality."