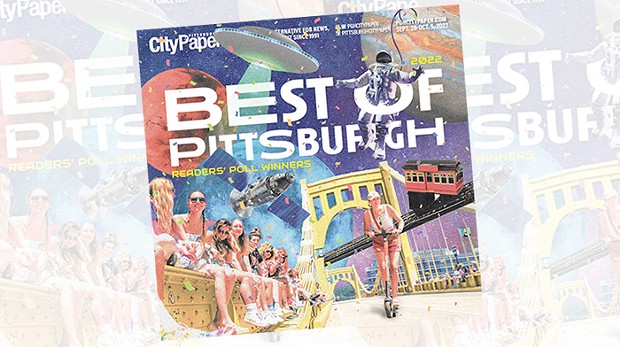 What sets City Paper’s poll apart from others? Besides the obnoxiously large number of categories (yeah, we know — we keep trying to edit them down, but every year, we hear from readers who tell us we’ve missed some important ones), the Best of Pittsburgh is 100% determined by reader input. We use SecondStreet, an online voting platform, which automatically tabulates the results. No, City Paper staff members aren’t allowed to vote. And no, despite rumors which have existed since the poll first launched 30 years ago, no one can win a category by buying an ad. (But yes, winners are notified before this issue hits the stands and our sales team does sell them ads, which help support our local journalism throughout the rest of the year.)

What we do, though, is fact-check your noms. And we don’t just check them for spelling errors or to make sure you actually nominated Pittsburgh folks. We spend months checking each entry and eliminate any nomination we find to have posted anything racist, sexist, homophobic, Islamaphobic, transphobic, or harmful to others. We also listen to your feedback and adjust the categories before the poll starts every year based on your recommendations. Did we miss a category you’d like to see next year? Spot one you’d rather we delete? Reach out and let us know. This is your poll, after all, and we aim to have each year’s poll better than the last.

Why the space theme? Well, besides making this issue look cool as hell, there are space-themed events happening all over the city this year. For one, Pittsburgh is home to the Allegheny Observatory in Riverview Park and a planetarium at the Carnegie Science Center, where yinzers can dream of life in another galaxy. The Science Center also just launched a new exhibit, Sun, Earth Universe, focusing on the solar system, the universe, and “the big questions NASA is trying to answer about each.” In November, the Center will also debut its Mars: The Next Giant Leap exhibit, which explores the possibilities of traveling to and living on the Red Planet. But mostly, we were inspired by the Moonshot Museum, Pennsylvania’s first-ever space museum, opening soon in the North Side. We can’t wait to see if it ends up on next year’s winners' list.