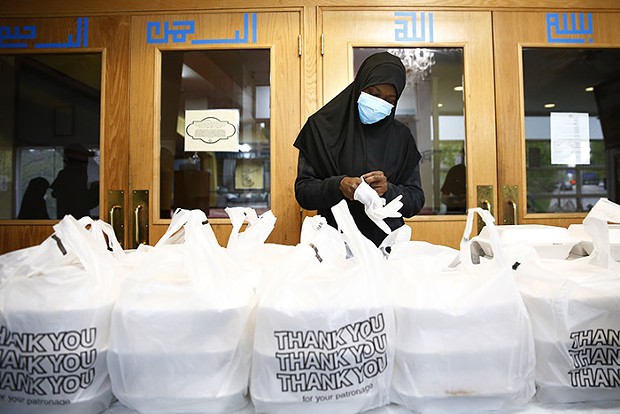 CP photo: Jared Wickerham
A volunteer puts on gloves before handing out Iftar boxes at the Islamic Center of Pittsburgh during Ramadan in May 2020, part of Alex Gordon's award-winning story on Pittsburgh's Muslim community celebrating Ramadan during the pandemic.
As an editor, it’s often difficult to know which stories to submit for yearly awards. No publication really knows what judges are looking for, and sometimes, you don’t even know what kind of competition you’ll be facing.

But this year, there was one story I immediately knew I was submitting to the Press Club of Western Pennsylvania's 2021 Golden Quill Awards: Managing Editor Alex Gordon's feature on How Pittsburgh's Muslim community is celebrating Ramadan during coronavirus, a beautiful story on a group of local people who had to shut down everything during their holiest months of the year. It was a story that not only our staff was proud of, but Alex told me he was honored to write.

This week, Alex's story was awarded first place in Excellence in Written Journalism, Traditional Feature during the Golden Quills award ceremony, honoring the best journalism in Western Pennsylvania and surrounding counties in Ohio and West Virginia.

After the story was published, Alex shared with me how touched he was that one of the subjects in his story invited him and his fiance to his home for dinner after the pandemic was over. That sadly never happened. Alex died by suicide in October 2020.

While Pittsburgh City Paper always appreciates being honored for our writing, hearing that our stories resonated with our readers, and from the people we write about, is more important than any award we've ever received. But this one really means a lot to us, and all of us thank you on Alex's behalf.

City Paper also took home several other first-place awards in Division 3, including a Best of Show, as well as multiple finalists. The full list is below:


Excellence in Written Journalism, News Feature
“The Displacement of Anthony Hardison From His Lawrenceville Apartment Is a Microcosm of a Neighborhood Epidemic,” Ryan Deto

Pittsburgh City Paper was also a finalist in the following categories: