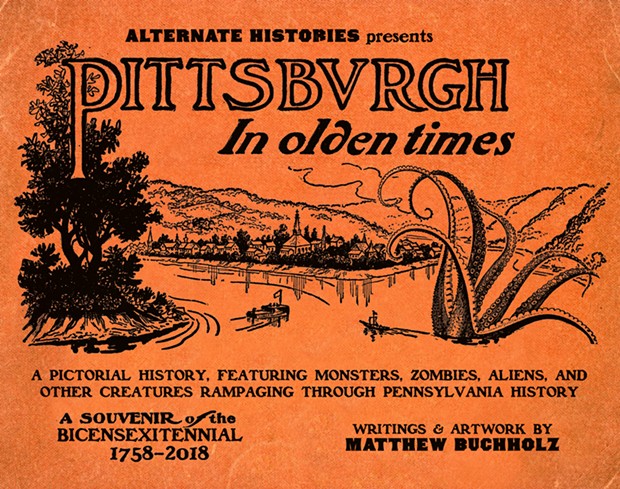 “Pittsburgh in Olden Times is the culmination of eight years of work about Pittsburgh,” Buchholz stated in an official press release. “Bringing all my prints together for this region gave me a chance to evaluate, rewrite , revamp old images and create new ones as well.” 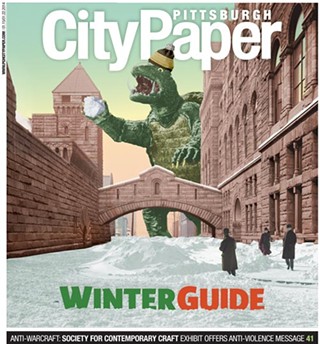 Matthew Buccholz
City Paper Winter Guide 2014
Buchholz has been producing work about Pittsburgh, as well as other locales since he moved to the city from New York in 2008. He then started Alternate Histories here in 2011. Buccholz has designed two covers for City Paper.

Pittsburgh in Olden Times follows up another collection of pieces by Buchholz, the 2013 book Alternate Histories of the World. He also released Classics of Filmdom, a series of pocket-sized scripts to B-movies, including Manos: The Hands of Fate and Plan 9 from Outer Space (holiday shoppers might want to check out the one for the 1964 Christmas turkey Santa Claus Conquers the Martians).

Pittsburgh in Olden Times retails for $20 and will be available for sale at a special book release party at Lorelei (124 S. Highland Ave., East Liberty) on Wed., Nov. 28 from 5-8 p.m. The event is free and open to the public. You can also buy it on the Alternate Histories website and at several local stores.