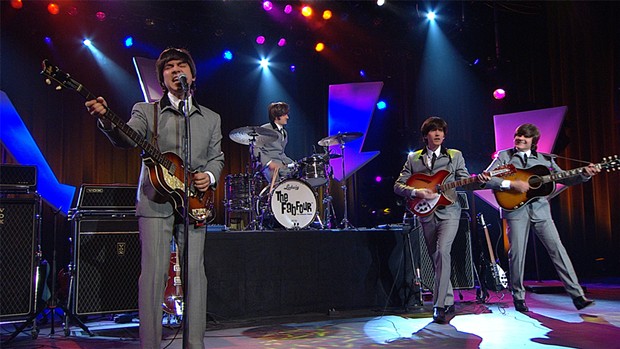 Photo: The Fab Four
The Fab Four
Every Monday, CP staff writer Jordan Snowden wraps up the weekend in local and national music news with #MusicMonday. Here's what went down in the past few days.

For the first time ever, Courtney Barnett made a performance stop in Pittsburgh. (Heart eyes emoji)

How come none of you clowns told me about Courtney Barnett until after her first show in Pittsburgh?

The ultimate Beatles tribute band, The Fab Four, rocked the Byham Theater Saturday night. As someone who never got to see the iconic 1960s band in person, this was as close as one can get. Besides sounding incredibly close to a live Beatles performance (the members played every instrument themselves and sung without avail), throughout the two-hour show, the band had three costumes changes to represent the different phases of The Beatles: suit and tie early pop (A Hard Days Night), brightly colored psychedelic rock (Sgt. Pepper’s Lonely Hearts Club Band), long hair, don’t care back to the basics rock (Abbey Road). The appearance really added that extra something.

While the music was lovely (aren’t The Beatles always great to the ears), The Fab Four also totally engaged the theater. They encouraged fans to get up and dance and clap along. They threw a free t-shirt into the audience. They called out audience members in a comical way. There was even a proposal to the song, “Till There Was You.”

Such a short period of time did not allow the band to play all my favorites, but in their defense, there are so many to choose from. So, the next time The Fab Four makes a stop in Pittsburgh, I will probably be attending again, and I highly recommend you do too.


Pittsburgh rock bands, Rave Ami and Talkers, both dropped their sophomore albums and held a release party at Cattivo.

My bros @raveamiii made a new record and I’m blasting it on my train ride while I catch up on emails.

P.S. Looking for something to do tonight? Jam out to ’ new album, Bambi, at Stage AE.


If you’ve been wondering what Mariah Carey has been up to, she’s been working on a new album entitled, Caution, which drops November 16. In preparation for the release, Carey announced dates for a 2019 Caution world tour.


I'm so excited to bring the CAUTION WORLD TOUR to you, starting Feb 2019! ⚠ I can't wait to perform songs from the new album + some of our favorites 💖 HBF Presales begin tomorrow! Public on sale 10/26 @ 10am 🦋🎵 #CAUTION https://t.co/iCGLcnrLHj pic.twitter.com/ABrZ7RBg6N

And the 'burgh is one of her stops.

Many Swedish House Mafia fans are not, in fact, Swedish. So when the electronic group made a reunion announcement via live broadcast, the message was lost in translation (ha!).

Me watching #SwedishHouseMafia live not understanding a single word pic.twitter.com/u1G7l2pp2V

so after watching Swedish House Mafia talk in Swedish for 25 minutes, I still don’t know what’s going on 🤷🏼‍♂️😭 #SwedishHouseMafia

Swedish House Mafia stream:
1. Tour starts in May in Stockholm.
2. New music and sticking to their sound. You’re welcome. pic.twitter.com/N4ULy3PZTS

Despite Notre Dame Stadium being around for 88 years, a musician has never performed in the stadium. And although there was snow, country star Garth Brooks became the first person to put on a concert for the Fighting Irish.

Even on Saturdays when Notre Dame Stadium trades @NDFootball for @garthbrooks, there’s still that magic in the sound of our name. ☘️#GARTHatND #GoIrishpic.twitter.com/Uu05RfNSeq

You ALL made history tonight @NotreDame! Thank YOU for letting me be part of it!! I am on top of the world knowing that we made a date to do it again! love, g #GARTHatND pic.twitter.com/Fqy8ykYbve


Britney's back? The early-2000s pop star announced a 2019 Las Vegas residency show, Domination, at Park MGM the best way she knows how: as theatrical as possible.

It’s always great catching up with @MarioLopezExtra! Thank you so much for coming out to Vegas and being a part of the #BritneyDomination announcement. You are the best!! pic.twitter.com/OQXH7HyRpr


Guess what other early-2000s star is back. Avril Lavigne. She made her debut via Billboard.

At home with @AvrilLavigne, who's finally back (and totally ready to party) https://t.co/sL8Z2rjIqi #AvrilOnBillboard pic.twitter.com/w4C1ot1oBa

.@AvrilLavigne discusses writing her latest single "Head Above Water" and how it was influenced by her experience fighting Lyme Disease #AvrilOnBillboard https://t.co/sL8Z2rjIqi pic.twitter.com/0DhqLKI30Y

She is the icon, she is a goddess, queen .... I have to say that this woman is really beautiful and time never passes for her. #WhoeverWasBornToBeAGoddessHasTheNameOfAvrilLavigner #AvrilLavigne #AvrilOnBillboard


And that's it for today folks. Come back next week for another edition of #MusicMonday.