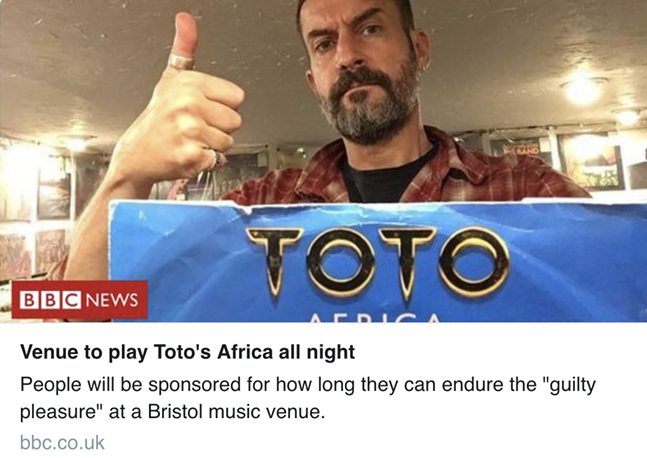 Screenshot of BBC Radio 6 tweet
Every Monday, CP staff writer Jordan Snowden wraps up the weekend in local and national music news with #MusicMonday. Here's what she has this week:

Severe storms on Friday caused Thrival Music X Arts to temporarily shut down for hours. As a result, Matt and Kim, along with a few other opening acts were cut, and headliner Dillion Francis performed an abbreviated set. Those who came for Matt and Kim were a bit disgruntled.

Refunds? @mattandkim are the only reason I bought a ticket.

I originally bought my early bird ticket because of @mattandkim but when Dillon was announced it was quite the surprise and a bonus ... I’m happy because I saw Dillon, but also disappointed I didn’t see the band i originally paid to see before any announcements 😕

But those who stayed through the storm were treated to an amazing set from Dillion Francis, who performed a tribute to Mac Miller.

It rained. It stormed. But Pittsburgh finished strong. Thank you to everyone who stuck it out tonight and to @DILLONFRANCIS for your tribute to our own @MacMiller #thrivalfestival

after hours of waiting on rain to stop, we got to see our undeniably favorite artist: @DILLONFRANCIS
what a show. what a night. thank you @ThrivalFestival so much for this opportunity.

Brillobox held its monthly Slappers n Bangers party on Saturday. It was a night filled with hip-hop, trap, and good times.

Justin Timberlake took the stage during the second day of the 2018 iHeartRadio Music Festival in Las Vegas and surprised everyone when he bought Shawn Mendes out to perform, “What Goes Around.”


"I am a big fan of this young man." Justin Timberlake as he introduced Shawn Mendes to the stage. They even sang together 😍 #iHeartFestival https://t.co/HSLfQ2Tv7o


Fans were geeking out.


Wow I love shawn mendes and justin Timberlake. TOGETHER. Pls collab. My life would be made.


It was a match made in heaven.

Shawn Mendes and Justin Timberlake sharing one stage is like having peanutbutter and strawberry jam all at once. 💕 https://t.co/62IedHZxkg

Can @jtimberlake and @ShawnMendes record an official version of this collab? Asking for a friend. https://t.co/rE2VDglJm5


Some love the idea.

Which song could you happily hear on loop? https://t.co/u0Gb7Mgxuz


Don't you hate it when clubs play songs that aren't Africa by Toto? https://t.co/TmjWqlxSmv pic.twitter.com/ThPJnyayKo


While others are not fans ...


Club to play Toto's Africa on repeat all night to raise money for African charity...https://t.co/xxjDFfQGkq pic.twitter.com/kRVjtcpH1t


Friday night during a show in Vegas, Travis Scott paid tribute to Mac Miller the best way he knows how - with a "freestyle":


Again, some loved the it …


While others liked the idea, they were not impressed with the delivery.


Mac is worth more than this.

Wolf Alice, a British four-piece alternative rock band, won the coveted Mercury Prize, an annual award given in the UK for the best album released by a British or Irish act. Up against Wolf Alice was Everything Is Recorded, Florence & The Machine, Jorja Smith, King Krule, Lily Allen, Nadine Shah, Noel Gallagher’s High Flying Birds, Novelist, and Sons Of Kemet.


So happy about this, my choice all the way! Well done guys ♥️♥️


Even though the congratulations rolled in, many were upset about the choice.

I’m sure as a wolf Alice fan you are pleased that they won, but as someone who is familiar with the nature of the mercury prize historically, I can tell you this record does not fit the bill


wow. congrats to them but i think this was a huge blunder. @JorjaSmith, archy, @ArcticMonkeys were all far more deserving in my eyes. don't see the logic here.

Living with plants: the ups and downs