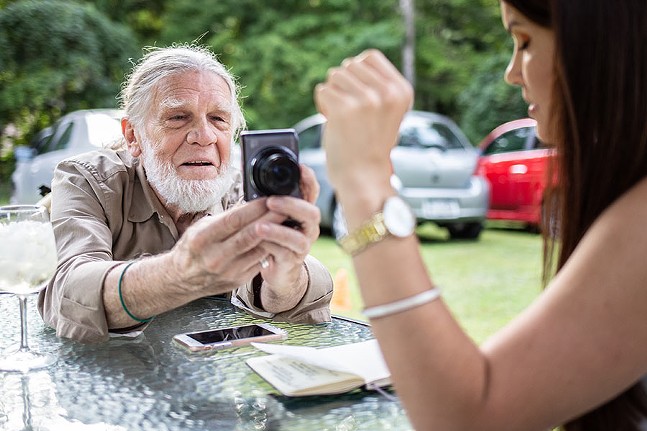 CP photo: John Altdorfer
Henry Diltz photographs a star tattoo on the wrist of Kate Benz during CindyStock, August 24, 2018.
The guy who shot the iconic cover for the Doors album, Morrison Hotel, is wandering around three acres of grass behind a house on Wexford Bayne Road. He disappears into a brown Winnebago and emerges clutching a glossy paperback.

"The Tao of Daily Living,” Henry Diltz explains. The woman who owns the Winnie gave it to him and he’s digging it.

Diltz embraces spirituality almost as much as his photography. Later that night, he'll present a slideshow of his 50 year-plus career at Cindystock 15, an annual cancer fundraising festival hosted by Cindy and Ted Yates in Sewickley. A hundred people will sit mesmerized in lawn chairs as Diltz highlights a photography career spanning five decades.

His career began inauspiciously with a Japanese camera he picked up for twenty bucks at a second-hand shop in East Lansing, Mich., and would go on to include two hundred album covers and hundreds of thousands of photos of iconic musicians. To name a few: James Taylor, Jackson Browne, Joni Mitchell, Crosby, Stills, Nash & Young, Dan Fogelberg, The Mamas & the Papas, Paul and Linda McCartney, The Monkees, Jimi Hendrix, The Lovin’ Spoonful.

“When I started as a musician taking photos, I would have slideshows for my stoned, hippie friends. … When the first slide hit the wall, 8-feet wide, glowing in the dark, and all my friends were there to comment and laugh and ask for more, more ... That, to me, was magical.”

Diltz' first "real," professional rock and roll portrait was Buffalo Springfield that came together by chance. His friend Stephen Stills asked if he’d like to tag along for their soundcheck. While they played, Diltz noticed a large, pink mural of a guy riding a bicycle on the building. As he was lining up the shot, the band walked outside, and he asked them to stand there to show the size of the mural.

TeenSet magazine heard about the photo, called Diltz, and offered him a hundred bucks for it.

“That was my Second Epiphany,” he says. “That somebody would pay me to do what I couldn’t stop doing all day long.”

Which he still does, at the age of 80. He's constantly reaching for the Canon Power Shot always tucked into his pocket, even when he has the Canon 6D slung on his shoulder. There's always another photo to be taken, another series to compile: stars, hearts, tee shirts, peace signs, graffiti, old trucks, bicycles, fire hydrants …

“If I go to a new city, I’m like a pig in shit,” he laughs. “I guess I keep in touch with life by looking for those similar things in every situation. I see the world through my lens.”