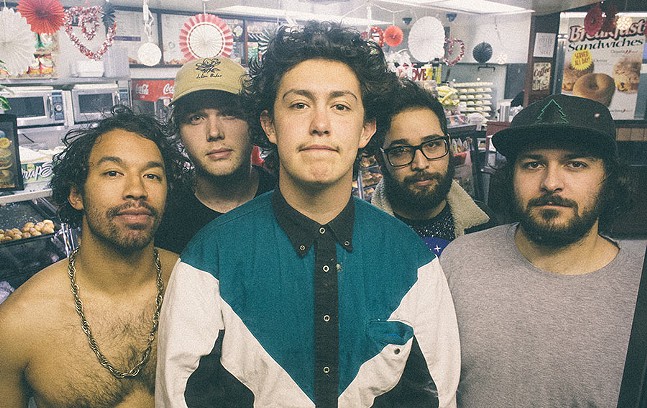 Hobo Johnson loves scones. He doesn’t bake them, he doesn’t eat them. He raps about them.

Johnson is the persona of Frank Lopes, a 22-year-old rapper from Sacramento. The young artist released “Peach Scone” with his band, the Lovemakers, in the fall of 2017. The video went viral. Lopes navigates a "friend-zone" with his stream-of-consciousness rap style and off-the-cuff beats.

Lopes’ lyrics for “Peach Scone” tell the tale of a modern-day unrequited love.

“We should go and get a friggin' cup of coffee,” Johnson raps. “And I’ll act friendly and I won’t pull any stunts. But I’m little stunt puller from birth, so I don’t know what to tell you if I try to confess my love for ... scones.”

The video for “Peach Scone” opens on a backyard, Johnson standing center, grasping the mic, and smoking a cigarette with a manic look in his eyes. As he performs, Johnson characterizes the anxiety and pressure of young relationships. He riffs the on phrase, “I love the thought of being with you, or maybe it’s the thought of not being so alone.”

The emotion heightens as the Lovemakers join him to shout, “not being so alone!”

Johnson the performer, Lopes is the brain. He plays with speed and pauses, turning his melody into a story. His beats switch as he emotes. In "Romeo & Juliet,” a song about his parents' divorce, he breaks from a hip-hop rhythm to a piano solo in the first 30 seconds.

Lopes’ lyrics are a testament to humble beginnings. At 19, Lopes was kicked out of his home, finding refuge in a 1994 Toyota Corolla. He worked in a pizza shop, performed on the street, and produced music in laundromats and libraries. He created Hobo Johnson as a tribute to his past.

Lopes' profile is gaining momentum; he titled his 2017 album The Rise of Hobo Johnson. The sound of every song is different, but Johnson hooks listeners with his spoken-word artistry and passionate vocal delivery.

The rapper is bringing his love for peach scones to Pittsburgh on Mon., Nov. 5. Hobo Johnson & the Lovemakers will perform at Mr. Smalls Theatre in Millvale as a stop on The Bring Your Mom Tour 2018. Tickets go on sale Aug. 24 at 10 a.m.