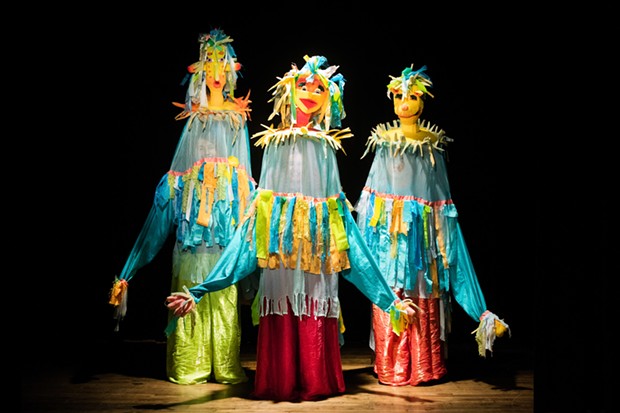 Photo courtesy Larry Rippel
Puppets from Puppet Slam show
For most people, the phrase “poetry slam” elicits a vision of a dimly lit cafe and scarf-wearing patrons snapping in approval.

For the Puppetry Guild of Pittsburgh, it’s the inspiration for their third annual "Puppet Slam" taking place tonight in Spring Hill at the Workingmen’s Beneficial Union.

“We’re using the idea of showcasing a bunch of short acts to show people what’s going on with Puppetry in Pittsburgh,” said Cheryl Capezzuti, the Puppet Slam’s chair. “It’s a format that’s actually popular in a lot of cities right now and our guild is trying to introduce Pittsburgh to the concept.”

The showcase will consist of several 5-15 minute puppetry acts by local artists. Capezzuti, a self-described "artist, educator and giant puppet maker," was quick to explain that the event will show artists’ usage of puppetry as a storytelling medium.

“One of the things that is most important to note about the work is that people have this concept that puppets are for little kids and that they tell stories for children,” Capezzuti said. “This work, people come and they will see works that are funny, works that are thought provoking, that are sad, that are creepy, and designed to not just have a good time but to make you think about what’s going on in our world.”

The slam will be hosted by Pittsburgh-based Tom Sarver and Dave English with music by Daniel “Kreepy Dollz” Baxter and his band Imaginary Friends.

The showcase, featuring puppetry media ranging from marionettes to shadow puppets, starts at 7:30 p.m. Attendees are invited to bring their own baskets to a pre-show picnic from 6:00 - 7:30 p.m., featuring a food truck, puppet workshops and beer from Spring Hill Brewery.

“You feel like in some ways like you’re going on an adventure to get there but it’s five minutes from Downtown,” Capezzuti said.

Capezzuti admits the event draws an “wide and unusual crowd,” with the event generally drawing 100 attendees.

Tickets are available online at the door for $10 for adults, $5 for children and residents of Spring Hill.

It's official: March 21 is now Pittsburgh's Day of Puppetry

Deutschtown gets a new coffeeshop