Pittsburgh’s recent library theft was one of the largest in history. Learn how other thefts stack up | Blogh

Pittsburgh’s recent library theft was one of the largest in history. Learn how other thefts stack up 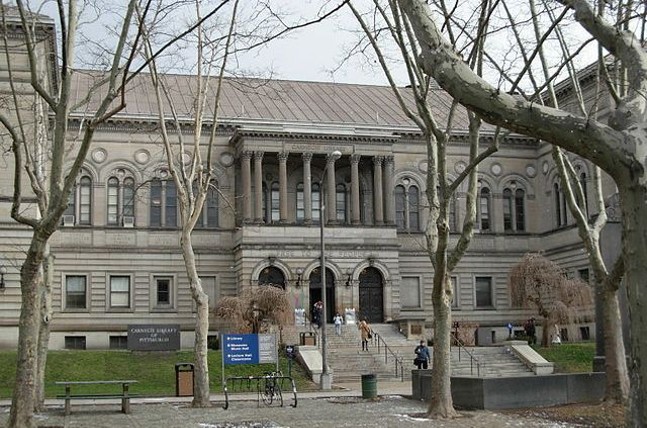 Photo courtesy Piotrus, Creative Commons
Carnegie Library Main Branch in Oakland
In 2017, the Allegheny County District Attorney began investigating a suspected theft from the Carnegie Library of Pittsburgh’s Special Collections room. On Friday, two men were charged with multiple counts of theft, forgery and other related crimes. Greg Priore, a former librarian at CLP in charge of the Special Collections, did the smuggling. John Schulman, owner of Caliban Book Shop in Oakland, sold them at his store and on eBay. The total value of the theft was more than $8 million, accumulated over 20 years.

The crimes of bibliomaniacs often fly under the radar likely due to the decline of libraries’ popularity and infrastructure. Even so, book thieves can extract millions of dollars worth of material, especially when stealing libraries’ rarest books. With that in mine City Paper wanted to inform readers about some other interesting library thefts from around the world. One case even led to a law making library theft a criminal offense in Pennsylvania.

Uh oh spaghetti o
In 2012, Italian authorities discovered more than a thousand rare books, including centuries-old copies of works of Aristotle, Galileo, and Machiavelli, had been stolen from Girolamini Library in Naples. The former library director, Marino Massimo De Caro, was charged with orchestrating the theft and is described on his Wikipedia page as an “antiquarian, librarian, impostor, and art forger.” He was put on house arrest for seven years.

Book Vampires
In 2004, four young men robbed the rare book department in the library of Transylvania University (a school in Kentucky for humans, not in Europe for vampires) of thousands of dollars worth of books, including a first edition copy of Charles Darwin’s Origin of Species. After they escaped, the thieves drove one of their crew to his tennis class final. They were all sentenced to seven years in prison.

A law is born
James Richard Shinn was a master book thief, traveling to and stealing from libraries across the country. When, in 1982, police seized his storage unit in Bethlehem, Pa., there were over 400 stolen books from Carnegie Mellon University, Princeton, the University of Michigan, and other colleges, valued at hundreds of thousands of dollars. He was sentenced to two 10-year terms. It was after his spree that Pennsylvania made library theft a criminal offense. His wife, who was not charged, said their life was crazy and worthy of a novel, but he probably would’ve stolen that too.

Just too many books
The FBI investigated Stephen Blumberg in 1990 and found, in his house, over 20,000 books stolen from libraries, worth around $5 million. Despite possessing a fortune, Blumberg ate at soup kitchens and shopped at Goodwill. He went on to be arrested several more times for theft and is still considered to be one of the most successful book thieves of all time. However, the CLP theft comes close to Blumberg’s nefarious prowess. His $5 million in thefts converted adjusted to inflation is worth a little more than $9 million.