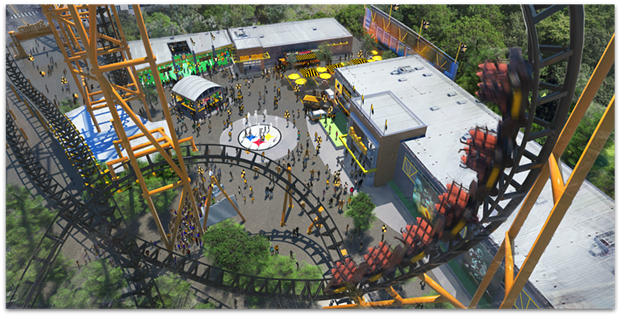 Photo courtesy of Kennywood
Concept art for Kennywood's upcoming Steelers Country section and Steel Curtain roller coaster
If you’ve been to Kennywood this summer, you probably noticed the empty spot next to the Racer where the Log Jammer once lived. It’s a little sad to look at the former location of a beloved ride. But Kennywood is filling that vacancy in the most Pittsburgh way possible: a Steelers-themed roller coaster named the Steel Curtain.

The Steel Curtain will be the centerpiece of the new Steelers Country area, which Kennywood unveiled at a press conference on Thursday afternoon. Steelers Country will also feature an interactive football experience, football midway games and a restaurant serving up stadium food. It’s expected to open for the 2019 season, though Nick Paradise, Kennywood’s director of public relations, did say that is subject to change.

here at Kennywood for @PGHCityPaper as the newest roller coaster is unveiled... pic.twitter.com/NbMEhhwOel


Steelers Country was revealed by Paradise, several Steelers executives, former Steelers defensive lineman Chris Hoke and, of course, Steely McBeam, the mascot whose cold, unseeing eyes are pure nightmare fuel. Terrible Towels were twirled. “Renegade” was played twice. It was as purely Steelers as an 11-5 season and AFC North title followed by an AFC Championship loss to the New England Patriots.


When it opens, the Steel Curtain will join the Sky Rocket and the Black Widow in the Kennywood lexicon — impressive and fun, but lacking in the classic feel that sets Kennywood apart from other amusement parks. It’ll never quite have the same feel as the Log Jammer it replaces or the Racer, which it will soon neighbor.

But it’s a good place to start, and the hole left by the Log Jammer will soon be filled in the most Pittsburgh way imaginable.

12 spots for teens to enjoy summer in Pittsburgh