CP photo by Luke Thor Travis
Pirates fans inside PNC Park
Awoke Tuesday to a text message from a friend who had presumably been watching the Pirates "play" baseball the night before. It read: "when life gives you lemons, you make lemon ... f**k it, they're down 16, I need dopamine. Do they make dopeade?"

The Post-Gazette's Liz Bloom was in Los Angeles to cover the sacking of the Pirates' ship  by the Dodgers. Read her story.

The loss started us thinking about the moments that made Pirates fans feel lousiest. Here is our list (in no particular order):

Derek Bell, only one person's idea of a good signing for the first season at PNC Park, wanted nothing to do with competing for a starting job headed into a second season with the Pirates. He promised "operation shutdown" if management forced him into a spring-training battle for right field with Craig Wilson.

"Ask (general manager David) Littlefield and (manager Lloyd McClendon) if I'm in competition. If it ain't settled with me out there, then they can trade me. I ain't going out there to hurt myself in spring training battling for a job. If it is (a competition), then I'm going into 'operation shutdown.'"


This report from the P-G's archives captured the surreal scene. By the way, headed into 2002, the Pirates were only halfway through a stretch of losing seasons that ran for two decades.

Apparently, there were no mirrors in the clubhouse 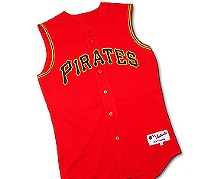 To be fair, Pittsburghers have been treated to some of the sharpest looks in baseball's storied history. Check out this feature in the always-great Uni Watch blog. In the 1970s, no franchise in any league dressed better than the Pirates. The mustard-colored caps worn by the 1971 World Series champions are all-time awesome, with the Stargell-star and striped pillbox tops donned by the 1979 title team rating a close second. And even during the mostly lean last quarter-century, the Pirates' basic uniforms have been pleasing.

Still, something went terribly wrong and the decision was made to introduce red vests for select games in 2007. It was, well, horrifying ... even more than five consecutive years without reaching the 70-win mark. But dropping these uniforms during that five-year run of futility challenged even the die-hardest fan.


Clearly, this list is incomplete. Tweet us with the moment that made you feel lousiest as a Pirates fan.