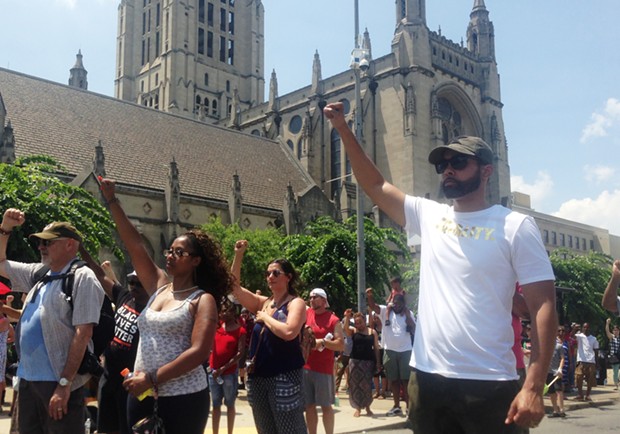 CP photo by Ryan Deto
Activist Jasiri X (right) and others protested Sunday outside of East Liberty Presbyterian Church
Typically marked by backyard picnics and fireworks, this past weekend before the Fourth of July instead continued Pittsburgh’s protesting trend.

More than 100 protesters shut down an intersection in East Liberty around noon Sunday. It was the latest of about a dozen protests in the wake of the shooting death of Antwon Rose Jr., killed by East Pittsburgh officer Michael Rosfeld on June 19. The Sunday demonstration was focused on the faith community’s role in advocating for the late Rose.

“Jesus defends the least of these, of those who were treated unjustly,” said Patrice Fowler-Searcy, an East Liberty Presbyterian pastor. “He would stand for Antwon Rose Jr. God compels us to stand up for justice and fight this fight.”

Representatives from the Jewish and Muslim communities were also present. Wasi Mohamed of the Islamic Center of Pittsburgh encouraged protesters to keep putting pressure on officials.

“Are we gonna do this tomorrow?” said Mohamed to the crowd. “This is something that can change.”

At the rally, the protesters laid out their list of demands:
• Indictment of Rosfeld on first-degree murder charges (he was initially charged with criminal homicide on June 27)
• Firing of Rosfeld by the East Pittsburgh police department
• Revoking of Rosfeld’s bail by Allegheny County judge Jeffrey Manning
• Formation of a citizen police accountability board by East Pittsburgh borough

The Rose case was not the only focus of another protest Sunday afternoon.

On Saturday, crowds filled Mellon Square park to protest the Trump administration's immigration policies that separated undocumented immigrant families at the border. Trump ended that policy in June, but protesters were demanding the reunification of the thousands of families that were separated.

The local protest Saturday was part of nationwide demonstrations that drew thousands across many cities and towns.