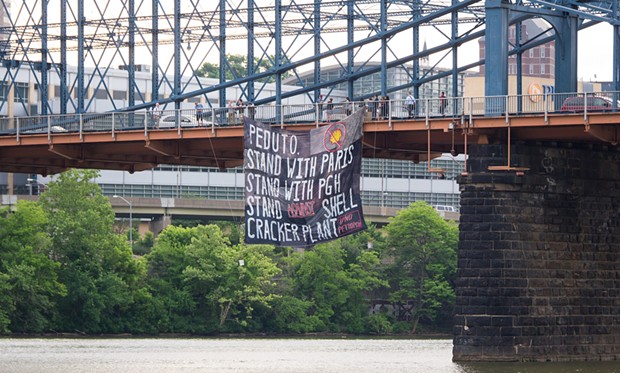 Photo courtesy of Mark Dixon
Banner hanging from the Smithfield Street Bridge
In June 2017, President Donald Trump announced the U.S. would be leaving the Paris Climate Accords, and in doing so said he "was elected to represent Pittsburgh, not Paris.”

Pittsburgh Mayor Bill Peduto responded to that statement in a tweet saying, “As the Mayor of Pittsburgh, I can assure you that we will follow the guidelines of the Paris Agreement for our people, our economy & future.”

Well, some Pittsburgh college students want to hold Peduto to his environmental commitments and are calling on him to oppose the under-construction ethane cracker plant in Beaver County, a facility that processes natural gas in plastics. Environmental groups warn the cracker plant, owned by oil giant Shell, will lead to increased air pollution that will flow directly to Pittsburgh and other towns in Southwestern Pennsylvania.

Pittsburgh’s asthma rate is already 13 percent higher than national average and the cracker plant could make that worse.

On June 1, several University of Pittsburgh students and alumni traversed the Smithfield Street Bridge and hung a banner that read, “Peduto. Stand with Paris. Stand with PGH. Stand against Shell cracker plant.”

“When Mayor Peduto spoke out a year ago, he showed the world that Pittsburgh and Southwestern Pennsylvania were ready to take a stand on climate change,” read the press release. “His silence on the cracker plant begins to cast doubt on the sincerity of his statement. The cracker plant represents a risk to the health of people in Pittsburgh.”

Keyva Clark, spokesperson for Peduto, sent this statement in response to the protest: “The Mayor is focused in on our commitment to the Climate Action 3.0 Plan, which aims to reduce Pittsburgh's greenhouse gas emissions by 50 percent by 2030. The Mayor cannot speak for the residents and the duly elected officials in Beaver County, just as they do not speak out about the policies Pittsburgh is establishing. "

Clark added that Peduto is focused on environmental goals like 100 percent renewable energy use, disinvesting from fossil-fuel companies and a 50 percent reduction in energy and water use.