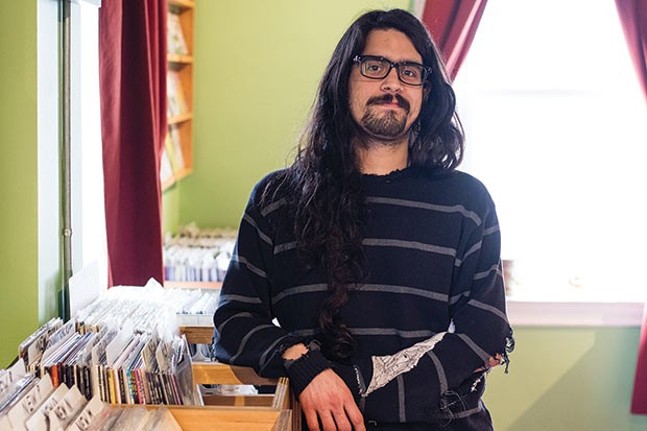 CP Photo by Luke Thor Travis
John Villegas at his music store Cruel Noise Records in Polish Hill.
Record Store Day takes place on April 21. The idea of the event is that labels come out with a list of rare releases, new releases or re-releases and sell those records in independent stores around the country.

The problem is that, to be a part of those RSD specific releases, you have to pay in. Additionally, the mediums in which we consume music vary, and some other options can be more accessible and affordable. John Villegas of Cruel Noise Records, in Polish Hill, chatted with City Paper about his shop's relationship to RSD and what he sees trending in the store.

Every time I come in here, I find at least one amazing cassette. Whenever I explore other shops, very few folks are still selling cassettes.
I think I’m the only place in Pittsburgh that actively tries to buy and sell cassettes, not just inheriting them and hoping to God to get rid of them. I sell tons of them, I sell more than anyone else, because I think people know they can come here and find cassettes they actually want and not just dig through trash hoping for some little treasure.

Why do you find yourself attracted to cassettes?
[There's] a weird intimacy [with the sound of cassettes]. The format of cassette is so thin that there’s natural compression that happens. But it’s analog compression. You’re stretching it to its limits, which, if you do that with digital or have something peaking in the red, it’s going to break up in a different way. Something like this, it sounds good in its badness. The best things in all of my favorite recordings are the imperfections, where you can hear something was off or there was a mistake that happened to be totally brilliant that you can’t replicate again.


What are the cassettes that you get really excited about? Any particularly cool ones come through lately?
Sometimes the things I nerd out on the most with cassettes are the cassettes for old Pittsburgh bands, especially ones from the ‘80s, where I’m like, "holy shit, this has lasted this long, and it's a relic." The original Half Life demo came through, and that’s from like 1983, and it had a huge fold out insert that barely fit into the cassette, but it had all these stupid little drawings in it, like a smiley face guy with charged punk hair and all sorts of little inside jokes. That’s probably the best thing that’s come through here in recent times.

Why do you think people are buying and making cassettes more commonly now?
Because it’s cheap and accessible. Active bands like to put them out because it’s so much cheaper and has a much quicker turnaround than putting out a record, which ties into Record Store Day. With a huge record label, they just buy blocks of time at record pressing factories, and they won’t even use them most of the time. They just want to have it in case they need to re-press the first Boston record or something, which nobody needs to re-press because you can find them anywhere for a dollar. But they want to sell it to you for $25 because they know their industry is doomed and they’re trying to do whatever they can to save it.


But tapes are the easiest DIY thing to do. Anyone can make it, all you need is a double tape deck and your band could have a release. You can just go to Kinkos and make covers.

Do you ever find that non-RSD releases you order for the shop are delayed by the event?
It happens every year. Things will have a street release date of whenever, and sometimes it’ll be late or I’ll order records and they’ll come before they come out, and then I just hold them until they’re supposed to be released. There are times where they’ll just get pushed back. It’s very frustrating.


Does RSD help your business in a noticeable way?
[RSD] brings in people that usually wouldn’t come in, but it’s any other Saturday crowd. There’s the people the come in here all the time, the people who come in here and just hang out. People that come in just because they actually want to buy records, not just because it’s a day to be buying records. It just brings in a different crowd, and I get a lot of annoying phone calls from people being like, “Do you have the new Lady Antebellum live 10 inch for Record Store Day?” and I’m like, "Let me check...no."


It’s very silly. You also have to register, and for some of the titles you have to pay to be a part of it. It’s fucking wack. The [RSD] stuff just sits. Anytime you go to the Exchange you just flip through so many White Stripes RSD 7 inches that nobody wants. It’s an egregious waste of resources. You could be allocating this time and effort into things that actually matter, or things people might actually care about instead of every Iron Maiden single being reissued at once. [Laughs]

If other people can benefit from Record Store Day, that’s great for them. But it’s definitely just a cash grab for a dying industry and I don’t support it.

Did you order any RSD releases at all this year?
Zero. I order absolutely zero. It’s not worth it. I only buy things that I think are at least moderately good, or, at least with new stuff, because most of the stuff that’s here is used, but as far as new stuff, it’s way more curated. Whether it be anything that’s on this wall over here [towards the front of the building], that’s the new releases I think people should pay attention to. It’s also a much more intimate and personal place than going to somewhere else where they’re just trying to guess what people want to buy. Which, not to say that I’m not doing that, but I also want to put my opinion out there. This is a snapshot of my taste.