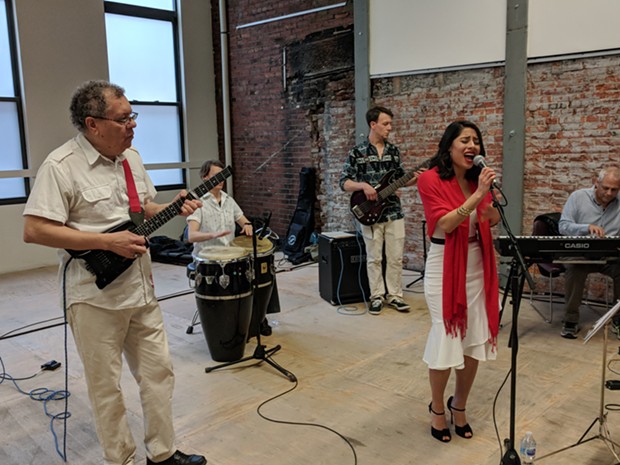 CP photo by Rebecca Addison
Flor de Luna will be among the performers at this year's festival
Pittsburghers bet on whether it will rain during all 10 days of the Dollar Bank Three Rivers Arts Festival the way other people bet on sports. But whether it rains or not, this beloved event draws thousands of residents from the city and surrounding suburbs to Downtown every year.

Today, the Pittsburgh Cultural Trust announced this year's lineup for the festival which includes art, live music and more than a dozen food vendors. The festival runs Fri., June 1 through Sun., June 10.

This year, the event will kick off on June 1 with gospel/soul legend Mavis Staples. Staples is a civil-rights activist and a member of the Rock and Roll Hall of Fame.

Other acts include Valerie June, the Pittsburgh Symphony Orchestra, the Mendelssohn Choir of Pittsburgh performing The Times They Are A-Changin': The Words and Music of Bob Dylan, Everything Everything, Sidewalk Chalk, Ricky Skaggs & Kentucky Thunder, Banda Magda, and Lukas Nelson & The Promise of the Real.

The festival will include several public art projects including Six Plates for Annabelle and Maggie, a geometric sculpture by Wilkinsburg artist Dee Briggs that will be installed in the Gateway T station and remain on display through May 2019. Other art pieces include British-born artist Janette Beckman's Faces of Pittsburgh, a public art piece that will include photography workshops with local students.

This year, several artists were awarded grants from the Pittsburgh Foundation and the Heinz Endowments to participate in the festival. They include Heather Hopson presenting Single Mom Defined, a photo essay exhibition and video series meant to empower single mothers, dancer Brandon-Ahmauri McClendon and R&B group Water Seed.

A number of Downtown galleries will also host exhibits specifically for the festival.