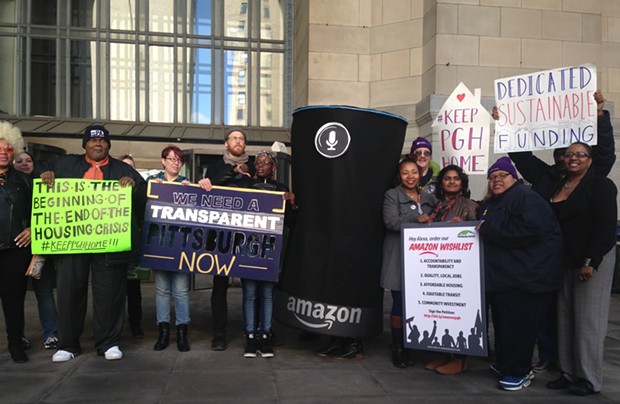 Brandi Fisher, the Worker Justice Organizer for labor-coalition Pittsburgh United, said at the press conference these goals were necessary to help combat Pittsburgh’s inequality issues. She said she fears Amazon moving to Pittsburgh could actually make the inequality worse, if these steps are taken.

“Economic development can be good,” says Fisher. “But we need transparency and we need quality jobs.”

Pittsburgh and Allegheny County officials have refused requests to make Pittsburgh’s Amazon bid public, citing that there are private property confidentiality issues in the bid. Fisher said city officials should consider a local ordinance to ensure the potential economic development of Amazon benefits all Pittsburgh residents, not just tech workers who would move to the city.

“As a region we want to be developed,” she said. “There is a way to be inclusive and let us be a part of that process, so we can work together.”

But one speaker at the press conference didn’t have much faith Amazon could benefit Pittsburgh. Hazelwood resident Sandra Cole McKamey said she didn't want to see Amazon come to Hazelwood. (The Pittsburgh neighborhood along the Monongahela River has been rumored to be a potential site for Amazon thanks to its new Hazelwood Green development project.)

“We don’t want to see our families displaced,” said McKamey. “We are not looking forward to Amazon coming to Hazelwood.”

Another Hazelwood resident expressed was also opposed to Amazon moving to Hazelwood, but offereed a more nuanced view of Amazon's potential role in the neighborhood. Dylan Rooke said that Hazelwood has done a good job over the last few years starting to boost locally owned small businesses. He said if Amazon were to move to Hazelwood, the company should contribute to the good work that is already happening, not disrupt the progress.

“We don’t need some Amazon savior,” said Rooke. “We still need to figure out how to develop for current Pittsburgh, not just future Pittsburghers.”

Editor's note: The story originally erroneously stated that Dylan Rooke was not opposed to Amazon moving to Hazelwood. After further discussion with Rooke, his stance on Amazon has been updated to the story, and is now more accurately reflected.