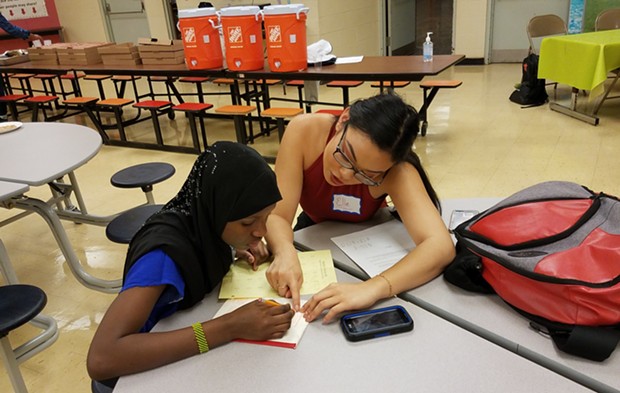 Photo courtesy of Jewish Family Community Services
Duquesne University student working with a young refugee
One of the most daunting tasks for refugee children in integrating into an American lifestyle is something most Americans take for granted: speaking English. According to Dr. Jennie Schulze, an assistant political-science professor at Duquesne University, language skills are one of the biggest barriers in getting refugee children properly educated in the U.S.

“There is a need to close that gap and help integrate these refugee students into our society,” said Schulze in a press release.

But Schulze and Duquesne students are being proactive about this issue and are volunteering their time to help Pittsburgh refugees. At an after-school program at the Pittsburgh Gifted Center in Crafton Heights, Duquesne students work with refugee children from Syria, Iraq and the Democratic Republic of the Congo, helping them with homework and practicing English.

The program is organized by the Alliance for Refugee Youth Support and Education (ARYSE) and Jewish Family Community Services (JFCS), and is co-sponsored by the Islamic Center of Pittsburgh.

Megan Toomer is a sophomore at Duquesne University. She works with 10-to-12-year-olds in the program, and she says she has really formed a bond with the refugee children. Toomer says she felt compelled to help the children learn English since that can be the most difficult part of being a new arrival to the U.S. Toomer also says she has actually improved her communication skills, because she’s been forced to teach without overly relying on speaking English.

Toomer says she was additionally inspired to volunteer because of some of the current hostile rhetoric surrounding refugees and immigrants in the U.S. and the actions of President Donald Trump’s administration. Trump has attempted to ban refugees from Muslim-majority countries and has repeatedly called undocumented immigrants violent criminals, without evidence.

“The rhetoric from the current administration has actually inspired to me to dedicate even more of my time to these kids,” says Toomer. “You hear all this rhetoric about violence, but if [people] meet an immigrant and realize they are not violent, then they will realize this issue is not what they think it is.”

Toomer says that beyond helping refugees adjust to American life, she hopes the program will help native-born residents change some of their preconceived notions about immigrants and refugees.

“It is important that we break those stereotypes,” says Toomer. “I am understanding their plight and what they are going through. It is necessary to do this work.”

Toomer encourages others to support organizations like ARYSE and JFCS, so they can continue programs like this. In the end, Toomer says that she has come to respect the refugees she tutors because she couldn’t imagine adjusting so well to a new country given what the refugees have gone through.

“They are very very resilient,” says Toomer. “It is remarkable how well they are adjusting. It is really admirable and being around them is definitely inspiring.”