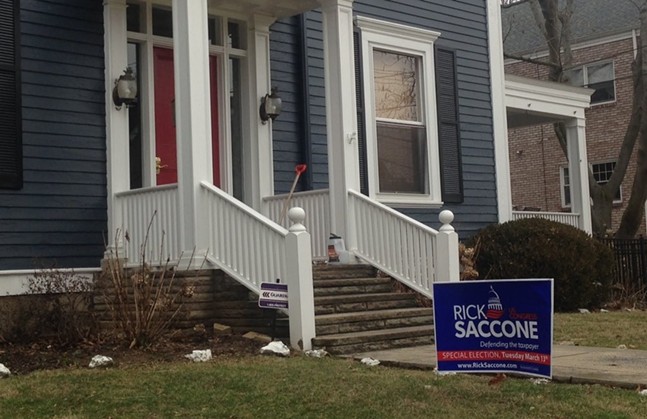 Reports have indicated that voters in Ross Township, Sewickley, Bellevue and Monroeville showed up to empty polling places today believing they could cast a vote in the special election.

Allegheny County spokesperson Amie Downs said in a statement that voters in Sewickley arrived at closed polling places and voters in Monroeville arrived at polling places but were turned away. Sewickley is located in Pennsylvania’s 12th U.S. Congressional District, represented by U.S. Rep. Keith Rothfus (R-Sewickley). Regardless, City Paper has spotted Rick Saccone signs on homes in Sewickley prior to the election, even though Sewickley is outside of PA-18.

“The Elections Division is continuing to receive calls from voters who are not in the 18th District, but either believe they are or are still expecting to vote,” said Downs in a statement. “We understand that similar calls are being received in neighboring counties as well.”

Pittsburgh Post-Gazette editor John Allison tweeted that “This morning a friend who lives in Ross Township said ‘I went to my polling place to vote but it was closed.'” (Ross Township is also out of PA-18 and is in PA-12.)


Second best: This morning a friend who lives in Ross Township* said “I went to my polling place to vote but it was closed.” *[not in 18th, for auslanders reading this]

Ron Borczyk, Bellevue’s director of administrative services, told CP that at least one person showed up to a polling place in Bellevue to vote this morning, but the polling place was closed since Bellevue is not inside of PA-18. He also said some voters called the Bellevue borough building prior to the election to find out information about where they could vote.

“We have had a handful of calls about times to vote and where to vote,” said Borczyk. “We informed them that what district they are in and that they can’t vote in the special election.”

Beaver borough elections director Dorene Mandity told the P-G that the large amount of TV advertisements contributed to the confusion. "They are so overabundant, and you are viewing them whether you live in the district or not,” said Mandity in a March 13 P-G article. “When I started seeing the ads, I knew we'd be getting calls."

Community College of Allegheny County political-science professor David Misra told CP that the confusion over who can vote is likely happening because people who don’t vote in every election are interested in voting in the special election.

“It's just people that are misinformed and have not voted in several cycles,” said Misra. “They want to vote, but they can’t.”

Misra said this could be an indicator of high turnout because less-informed voters are trying to vote, but don’t understand exactly where their district boundaries are. “This happens when you have high turnout, because most people either aren’t registered, but want to vote, or are unsure what district they are in.”