And while Blumenthal admits that his PA-18 survey was fabricated, the BRD Twitter account is filled with tweets defending its other polls. In fact, BRD’s pinned tweet states: ”Reminder: We were only 3 points off in the Virginia gubernatorial race. @MonmouthPoll, an A+ pollster according to 538, was 7 points off. We have been around for three months and have only released three polls, but our track-record is strong! Keep up the momentum. Follow/retweet!” 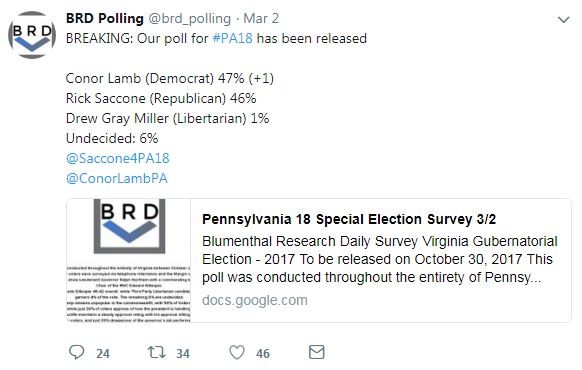 Image courtesy of Twitter
Screenshot of the fake PA-18 poll
Also, the BRD tweet linking to the statement admitting that the PA-18 poll was fake has since been deleted. Luckily, no publication has printed a story reporting the fake BRD poll results as legitimate. Data-journalism website FiveThirtyEight reported in August 2017 that fake polls were becoming a growing problem in the world of political journalism, and that political observers and journalists interested in polls “need to be more careful than ever.”

Blumenthal, who did not return a request for comment from City Paper, didn’t show many signs of regret of releasing the fake poll. “Other than a few hopeful Conor Lamb fans, almost nobody fell for the poll,” wrote Blumenthal in the March 2 statement. “People were quick to catch on, which did not surprise me in the slightest. I literally made the poll in fifteen minutes.

“If you fell for this, too bad. You’re way too gullible and should probably receive some sort of treatment. If you caught on, good job but thank you for giving me exactly what I was looking for by allowing it to go viral.”

Pittsburgh-based Peepshow is the sex podcast for life in 2018