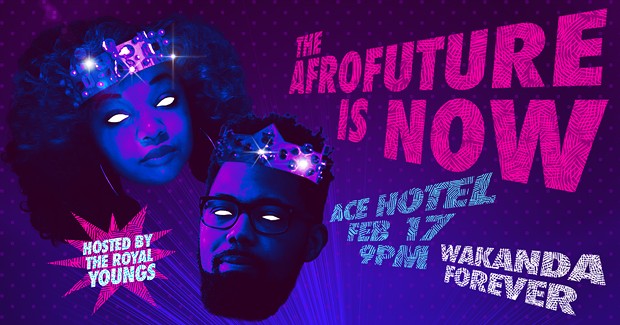 Within the first 24 hours of being released, Marvel's Black Panther has already earned more than $25 million and garnered nearly universal critical praise (check out City Paper's review this Wednesday). If you still don't have tickets, tomorrow you'll have an opportunity to see the film and celebrate the occasion with a party at Ace Hotel in East Liberty at 9 p.m. Sarah Huny Young of photography project American Woman and Damon Young of the blog Very Smart Brothas are throwing an event for the occasion. CP caught up with Sarah Huny Young via email to learn a bit more about the event. The interview has been lightly edited for clarity.

When were you first introduced to the concept of “afrofuturism" and what does it mean to you? How does it relate to the Black Panther film and its impact on culture right now?
I've been producing art from an Afrofuturistic perspective and aesthetic since way before I'd heard the term, actually. I've always been into sci-fi and geek culture—comics, gaming, and vinyl toys and figurines specifically. But I didn't know casting Black people in art and media as technologically advanced, as otherworldly beings, as godlike keepers of galaxies, or simply treated equal in society, had a name until I was introduced to Octavia Butler's work in maybe 2001 or 2002. We're a society that's obsessed with fantasizing about the future: what the cars will look like, how high they'll hover, and how many different kinds of cyborgs there will be to have sex with (lol). It seems pretty simple, but seeing people who look like you in these depictions of "a better future" is affirming. It's exciting.

Black Panther is absolutely an Afrofuturistic movie. Stan Lee and Jack Kirby created not only a Black superhero, but an African superhero with superior intellect who was the king of the most technologically advanced nation on the planet. And that nation was never conquered or colonized. And that the women were not only equal in this nation, they were warriors. And his name was T'Challa! That's already Afrofuturistic, but the vision that Ryan Coogler, Ruth Carter and the rest of the team on this movie have brought to life takes it that much farther.

To keep it simple, people are always excited to see superhero movies; Marvel movies make billions of dollars. Everything added to this particular movie — majority Black cast of stellar actors, Black superhero in the time of the Black Lives Matter and other POC-centered activist movements, the opportunity to see Africa depicted in this level of glory and brilliance — makes it a monumental pop culture event.

You and Damon Young are cousins, can you trace the idea for this event back to a specific conversation or moment with Young? Prior to the Halloween event, did the two of you have aspirations to put events on together? How did Young family get-togethers growing up inspire your approach, or did they at all?
The second I heard this movie was being released on Feb. 16, which was well over a year ago, I knew I'd have to tie it in with my birthday party in some way (I have one almost every year). At our Halloween party, which is the first event he and I collaborated on, a lot of people asked us when the next party was. I told them all — told Damon, too — that it would coincide with the Black Panther premiere.

It was my idea for us to start throwing parties together. I'm the social butterfly and the creative, and he's the realist with a huge audience so those are good ingredients for a successful partnership. We've been working together for years, be it on VSB, 1839 Mag, or other various projects over the years. But we've been family since I was born, obviously. I started calling our fam The Royal Youngs in 2001 when The Royal Tenenbaums movie came out. That's one of my favorite movies, and I think Damon is a big fan of Wes Anderson, too. And the family in that movie — particularly that they were gifted and quirky and had a unique way of communicating with each other — reminded me of our family. My dad was outgoing and fun; the [life] of the party, and Damon's dad was right there by his side. Our family reunions were TURNT UP. We know how to have a good-ass time. And we can drink you under the table, too.

I also think it's important to note that all of our events, which we throw under the moniker "Darkness is Spreading" (which is a Chappelle's Show reference), are inclusive. It's important to be intentionally inclusive; to consider inclusiveness [as] a must and to actively seek inclusiveness. We've adopted a credo similar to Afropunk's: no racism, no transphobia, no sexism, no anti-semitism, no Islamophobia, no homophobia, no body shaming. Bring your true self and bring love and bring your greatest intentions.

You’ve posted about how meaningful it is to you to see your friend and fellow Howard University-grad Chadwick Boseman rise to this level of prominence. When did you first find out that he got the role in Black Panther, and how did you react? I imagine it inspires a deep sense of pride and accomplishment, but are there more subtle/complex aspects to that emotion?
I found out the same time everyone else did; probably on Twitter. I was excited for and proud of him; everyone from COFA (Howard University's College of Fine Arts) was elated. There's a bonding that happens with theater kids. When we were rehearsing for shows we would just sleep in the theater sometimes. We slept on the floor of the administration building when we took it over to protest the merging of the College of Fine Arts with the College of Arts & Sciences together. We saw each other cycle through a lot of complex and varied emotions in preparation for roles with each other. I'm still close with a lot of people I went to H.U. with (including singer Frenchie Davis and Susan Kelechi Watson from This Is Us). This past week, especially, our Facebook timelines are just full of explanation points and all capital letters about this movie and Chad's success. To see one of us make it THIS far—a SUPERHERO? It's so dope. And it couldn't happen to a more humble and truly talented dude. I'm never calling him Chadwick, though. He's always been just Chad to me.

Can you rundown what to expect on Saturday night?
I'm amped about how the Pittsburgh community is coming together to lend their talents for this event. The gym at Ace Hotel will be completely unrecognizable. We have HearCorp coming in to hang floor-to-ceiling curtains and to install all the lighting effects. (Thank you to Aaron Clark, Erin Cooper, and the rest of the incredible staff at Ace Hotel. This is my third event with Ace and they are as thorough and professional as it gets. They’ve shown me and Damon and our friends a lot of love.) As I've been planning this I've told everyone "think about what a nightclub in Wakanda would look like" (which in my head is basically TRON). Our DJs are Pittsburgh legends (Selecta and Buscrates) and legends in the making (DJ Femi) and they'll be spinning afrobeat, hip hop, dancehall, reggae, house music — I just told them that any music from the African diaspora worldwide is a go; anything that makes people dance and feel happy as hell. We have drummers and dancers performing at 10:30 — Project: Tambor Cimarron "Drums of Freedom." We'll have a really gorgeous piece of artwork on loan from Flower House gallery — thank you to Flower House's Naomi Chambers, and to Tara Fay Coleman for facilitating that partnership. And Wigle Whiskey is graciously offering free tastings.

Are you and Damon in charge of appraising the excellence of the outfits? If so, what will you be looking for?
Black people around the country have been planning their outfits for this movie premiere and the corresponding parties since this time last year, so YES. Damon and I really hope to see people doing the absolute most with their fashion. I want to see people in cosplay or just really dapper with a specific nod to what Ruth Carter has done with the costuming. I love the way people look at Afropunk around the world — that is Afrofuturism and Black girl magic and Black boy joy to the 100th power. There are a lot of memes and jokes about how people are coming dressed like Hakeem and King Jaffe Joffer in Coming to America —I want to see THAT level of commitment. Obviously it's not just Black people who are looking forward to this movie, but this is definitely a notable moment for collective Black joy. We wanted to provide a space for people to show up and show out.