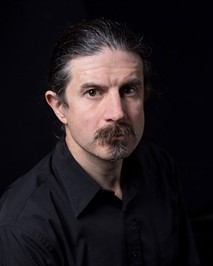 
I'm heading to 90.5 WESA, where I'll be arts and culture reporter.

I'd like to thank all my colleagues over the years, our readers, and all the people and institutions I've written about, for making it such a memorable ride. It all started back in 1997, when nobody at CP had email yet and the whole office shared one dial-up internet connection.

If you'll indulge me, to cap things off, here are some of my own favorite articles from over the years, culled from some of the nearly 1,100 issues I've been part of here.

Many are long-form pieces, from the days when we had the time and newsprint to run such articles weekly; they were a challenge to report and write, but looking back, they're some of the most worthwhile things I did.

All but one of these 18 articles are from 2003 or later, because that's as far back as CP's online archive goes. (Too bad; I have some faves from the early years, too.)

This 2002 piece on motorcycle road-racer Keith Reed is not in our archive, but was cut-and-pasted by an enterprising message-boarder. (I think a few drop-caps are missing, but like some text magically salvaged from the library of Alexandria, it's mostly there.)

An April 2004 profile of falconer and bird-of-prey expert Earl Schriver, whose life's mission is to disabuse the public of what he called "the Bambi complex."

Big ideas are fun. Here's "Muse You Can Use," a May 2005 piece on what art's good for or whether it needs to be good for anything at all.


Here's one from March 2006 combining a profile of artist and educator T. Foley with an exploration of her mission to improve media literacy (something we still sorely need).

Catching talents on their way up was one of the pleasures of the job. In April 2006, I profiled local poet Terrance Hayes, who shortly went on to win the National Book Award; he's now poetry editor at the New York Times.

In July 2006, more big ideas: an exploration of anarcho-primitivism via local exponent Kevin Tucker. (Civilization hasn't collapsed yet — but, you know, it could still happen pretty much any day of the week.)

"Bill Dorsey's Blues" was my 2007 profile of the street singer known for years to pedestrians in Oakland and Downtown. I'm grateful to then-editor Chris Potter for giving me the space to give Dorsey the article he deserved.

Not a cover story, but a critical examination in October 2007 of Bodies, a wildly popular and controversial exhibit at the Carnegie Science Center. The touring show displayed the flayed, plasticized bodies of anonymous Chinese people, who hadn't given their consent when alive and who might well have been prisoners. (This is me in high dudgeon, if you like that sort of thing.) I wonder how this show would go over today?

I also wrote a fair amount about environmental subjects. In April 2009, almost no one had heard of a thing called "fracking." "There Will Be Crud" might have been the first long-form article in this region to explore the subject.

Here's one from September 2009 based on research by a Pitt professor on endocrine-disrupting chemicals in the rivers, and what that might mean for all of us.

Still timely, given the recent controversy over Oakland's Stephen Foster statue: my April 2010 long-form consideration of Foster's legacy, occasioned by a new musical built around his tunes.

Remembering important but not widely known figures from Pittsburgh culture was one of my missions. Here's a November 2010 memorial piece on the marvelous rock singer Bobby Porter.

In November 2011, I ran a series on the environmental causes of cancer. Here's one installment, looking at why our culture values treatment over prevention.

Another big idea: What if we thought of money differently? This February 2012 interview piece with author Charles Eisenstein was fun for how it upends assumptions about monetary value.

My environmental column, Green Light, ran monthly for about a decade (right up through last month). Here's the July 2012 edition, about a local researcher looking into the effects of pesticides on frogs — and maybe on us, too.

Another Green Light , from April 2014, this one on finding new ways to talk about environmental problems.

I was especially proud of the package on fake news that the CP team put together last April. Here's my keynote essay, with links to the other pieces on this unfortunately still-timely topic.

Finally, here's my January 2018 review of the Carnegie Museum of Natural History's big We Are Nature show, which explores how humans have impacted earth.