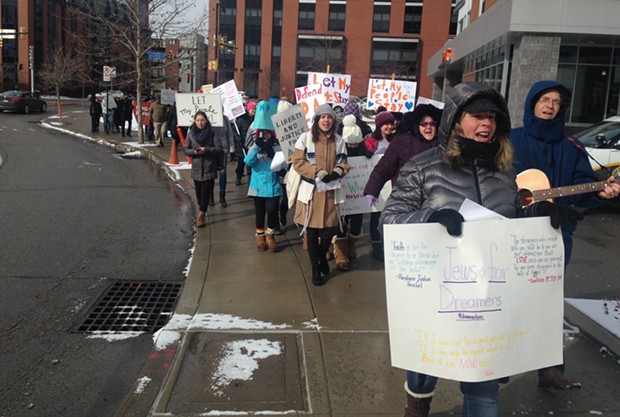 CP photo by Ryan Deto
Jewish activists and immigrant-rights advocates march on the South Side on Jan. 30
Ever since President Donald Trump's administration rescinded the Deferred Action for Childhood Arrivals (DACA) program last fall, the future for hundreds of thousands of immigrants has been in limbo. DACA recipients, also called Dreamers, are undocumented immigrants who were brought across the border as young children and have since been given work permits and temporary legal status in the U.S. In March, Dreamers will no longer be able to apply for DACA and could face deportation.

Over the years, DACA recipients have gathered allies amongst many liberal, and even some conservative, groups, because many Dreamers have known no other country than the U.S. And here in Pittsburgh, a group of Jewish activists is providing Dreamers a boost, too.

On Jan. 30, about 50 people gathered to protest in front of Pittsburgh’s U.S. Immigrant and Customs Enforcement office, on the South Side. The group was made up of members of Bend the Arc Pittsburgh, a progressive Jewish organization, as well as local Latino-advocacy groups Casa San José and the Labor Council for Latin American Advancement.

Tammy Hepps, a Squirrel Hill resident and member of Bend the Arc, said during the protest that the action was meant as a reminder to Trump, in advance of his State of the Union address that same evening, to focus on keeping Americans united in their embrace of immigrants.

“Let our people stay,” said Hepps. “A diverse America is a better America.”

“We don’t need a calendar to remind us what can happen when people choose to scapegoat other people and harden their hearts to those seeking refuge,” says Hepps, alluding to how the U.S. and other Western nations initially refused to take in Jewish refugees during the Holocaust.

During the rally, local rabbis read letters from local Dreamers, and the group sang Jewish worship songs and other protest songs.

Casa San José’s Monica Ruiz, who works with the undocumented community in Pittsburgh, told the crowd she was grateful for its support. She said many Dreamers she knows are anxious about their future, considering that “everything they know could go away in one tweet,” referencing Trump’s habit of issuing policy guidelines on Twitter.

Ruiz told the crowd that Pittsburgh’s DACA recipients have acted as model residents their whole lives and they deserve full, legal status in the U.S.

“These folks need a pathway to citizenship,” said Ruiz. “If not them, then who?”